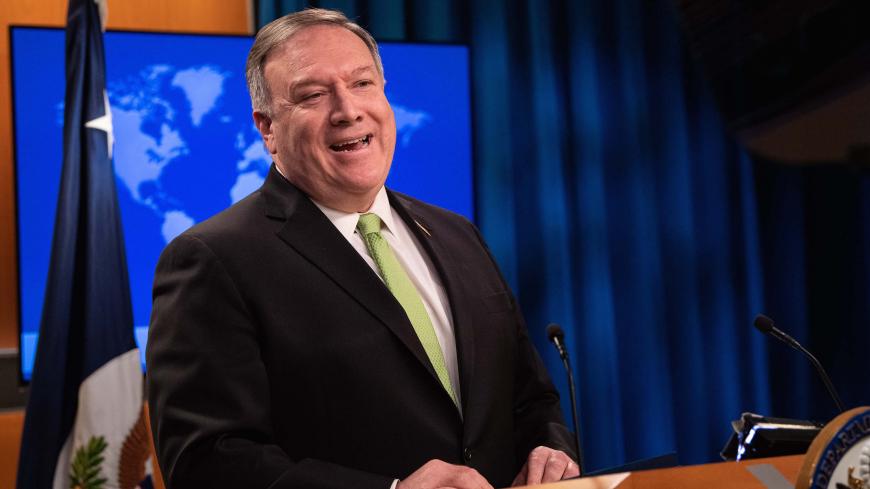 US Secretary of State Mike Pompeo speaks the press at the State Department in Washington, DC, on May 20, 2020. - NICHOLAS KAMM/POOL/AFP via Getty Images

US Secretary of State Mike Pompeo refused to give an interview for State Department Inspector General Steve Linick’s investigation into a massive Saudi arms sale deal before asking President Donald Trump to fire the watchdog, Al-Monitor has learned.

“We are aware that he refused to give an interview in the inquiry about the arms sales,” a Democratic aide on Capitol Hill told Al-Monitor.

Pompeo refused to disclose the reason he asked Trump to fire Linick during a press briefing today but denied that it was an act of retaliation over any investigations.

“I have no sense of what investigations were taking place inside the inspector general’s office,” Pompeo told reporters. “I’ve seen the various stories that someone was walking my dog to sell arms to my dry cleaner. It’s all just crazy.”

However, he noted that he responded to a series of questions “in writing” regarding "a particular investigation.” He did not specify what that investigation concerned and did not respond to a reporter’s question on the Saudi arms sales issue while leaving the briefing.

Aside from Linick’s query into Saudi arms sales, Linick was reportedly investigating allegations that Pompeo had used security staff to conduct personal chores.

Why it matters:  Although Pompeo refused to cooperate with the inspector general’s investigation into the last year’s $8 billion deal to sell Raytheon-made precision-guided missiles and combat aircraft to the Saudis and Emiratis, the secretary was integral in Trump’s decision to invoke emergency powers to proceed with the deal. The Trump administration justified the emergency declaration by citing Iran, which is backing Yemen’s Houthi rebels fighting the Saudi-led coalition.

Even some of Trump’s closest allies in Congress rebuked him for the emergency sale. Sens. Lindsey Graham, R-S.C., Rand Paul, R-Ky., and Todd Young, R-Ind., joined Democrats in introducing a series of resolutions to block the sale. While the moves to block the sale narrowly cleared the Republican-held Senate, Trump vetoed the measures.

What’s next:  Another Trump ally, Sen. Chuck Grassley, R-Iowa, has also asked the president to explain why he fired Linick by June 1. The chairman and the top Democrat on the House and Senate Foreign Affairs panels – Eliot Engel of New York and Bob Menendez of New Jersey – have set a shorter deadline, demanding that the Trump administration give Congress all records related to Linick’s firing by Friday.