The Kurdish-led government in northeast Syria is putting classes online and may continue to use the internet for education beyond the coronavirus. 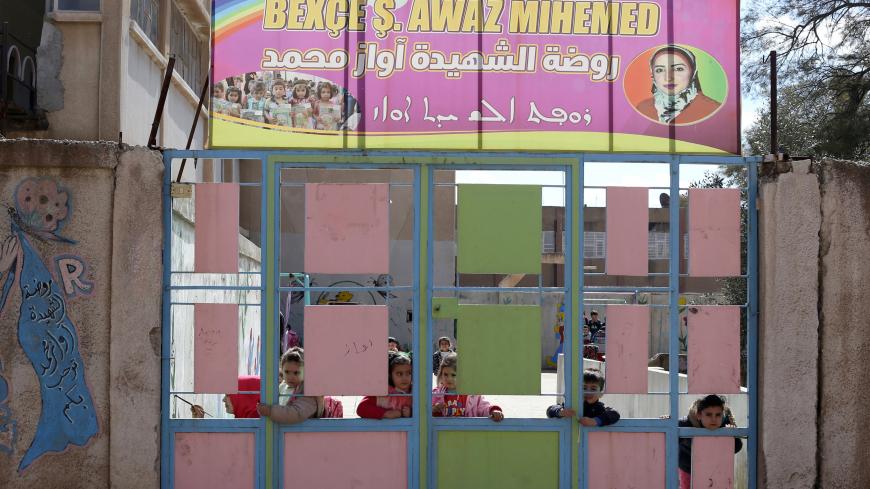 Kurdish children look through a gate at a preschool in Qamishli, Syria, March 6, 2019. - REUTERS/Issam Abdallah

Students in northeast Syria are currently learning online — a challenge for the Kurdish-led autonomous region where electricity and internet are weak and war continues. Yet the novel coronavirus is not the only reason local authorities chose to move classes to the internet.

Shirin Hemo, an education administrator in the Kurdish-led autonomous administration of north and east Syria, said the pandemic was only the latest calamity to result in school closures in the region.

“When Turkey attacked, schools closed, and before some regions were occupied by Daesh,” Hemo told Al-Monitor, using the Arabic acronym for the Islamic State. “Then with the coronavirus, we had to have an alternative.”

In October, feeling threatened by enemy Kurdish groups near its territory, Turkey attacked positions of the US-backed Syrian Democratic Forces (SDF) along its border and clashes between the SDF and Turkey’s Syrian rebel allies continue. In addition to these attacks, Turkey — which considers the SDF an extension of the outlawed Kurdistan Workers Party — continues to cut off access to water in the region intermittently.

Children in northeast Syria are currently learning in their own languages online and on television. This new use of technology poses difficulties, but may continue to be in use beyond the COVID-19 crisis.

Northeast Syria, which many Kurds call Rojava, is a statelet controlled by the SDF, and the group has limited recognition from Damascus. The Kurdish political party the Democratic Union Party is the main political power there. The diverse area is home to Kurds, Syriac Christians, Yazidis, Arabs and Turkmens. Although the Kurdish-led administration doesn't have full ties with Damascus, negotiations under Russian auspices have led to an understanding of sorts.

The region achieved de facto autonomy early on in the civil war and autonomous administration authorities soon gave children the opportunity to study in Arabic, Kurdish or Syriac — a type of Aramaic spoken by Christians. The Syrian government had heavily repressed the use of Kurdish language in the country, making this the first time Syrian Kurds could study in Kurdish in modern times.

The autonomous administration imposed a lockdown to mitigate the virus spread in March. Schools have remained closed since.

There are now 4,317 schools under autonomous administration supervision in northeast Syria as well as 33 connected to the Syrian government, according to the Rojava Information Center — a research organization based in the area’s capital, Qamishli.

Education has been difficult recently — and not only because of the coronavirus.

The war with Turkey forced many children to flee areas the autonomous administration’s western areas such as Tel Tamr in the middle of the school year, with many going to the cities of Hasakah and Qamishli. Some schools were also not usable at the time because they were hosting displaced people. Before that, children left their home areas and schools due to the Islamic State.

Hemo is part of the schools committee in northeast Syria’s Qamishli province. She is also the co-chair of its education planning and standards subcommittee. Northeast Syrian administrative bodies often have both a female and male chairperson for ideological reasons.

When Turkey attacked Hasakah and Qamishli, her team began discussing alternatives to education in schools.

“There were bombings and we had to think what to do with the lessons,” she said.

The school closures due to the coronavirus were the impetus for finally moving the classes online.

The new online classes and classes on television program is called Dibistana Male, meaning “school at home” in Kurdish. Classes in autonomous administration schools are now on the local channel Rojava TV six days a week and on Dibistana Male’s YouTube channel. The channel is updated daily with videos in Kurdish and Arabic.

Each video has an animated introduction where a virtual teacher writes the lesson’s subject and number on the board. An Eastern melody plays while this is happening. The teacher then delivers a usually 15- to 30-minute lesson, speaking to the camera and writing on the board.

All basic school subjects are covered. Some of the history lessons have relevance to the modern political situation between the Kurds, Turkey and the Arab world. One history video is called “resistance movements against the Ottoman occupation in Arab countries.”

The program only has three cameras and they film six days a week, according to Hemo. Each teacher has 15-20 students and is in contact with them via WhatsApp in addition to delivering the video lectures. All grades of students before university receive these lessons except for small children in primary school, she said.

Some universities in northeast Syria are also using online education after the autonomous administration’s decision, including the University of Rojava in Qamishli.

The endeavor is not without issues. Poor electricity and slow internet are the biggest difficulties. All of northeast Syria is without electricity for several hours a day, making people dependent on generators. The area also has relatively slow internet speeds, sometimes below 3G. Not everyone has consistent access to electricity and the internet.

Naman Osman teaches English language and translation at the University of Rojava. He said he teaches late into the night because the electricity cuts are less frequent at that time and the internet is “somewhat” faster.

“I teach between 8 and 11 p.m. because there is electricity and the internet is good,” Osman told Al-Monitor. “The net is somewhat good at that time.”

Osman teaches his students via Zoom, a video conference application people around the world are using due to the coronavirus-related shutdowns.

Northeast Syria’s political isolation poses a problem here. The University of Rojava, for example, lacks international accreditation. This means the teachers do not have access to corporate Zoom accounts that allow for unlimited calls. Osman must therefore conduct several Zoom sessions over the three hours he teaches nightly.

“We have no permission, so we stop and restart,” he said. “We have no such account.”

Despite these difficulties, the administration saw the internet as the “best solution,” Hemo said.

Northeast Syria’s coronavirus response faces a myriad of obstacles. The area lacks testing capabilities and its health care infrastructure is strained by the years of fighting. The UN’s deferential relationship with the Syrian government has resulted in a limited amount of aid reaching the region.

Having to conduct classes online in the difficult context of the virus in a war-torn region has an upside, though. Osman said he has benefited from improving his PowerPoint skills during the university’s closure and will continue to incorporate the internet in the future.

“When we return to our classes, I will continue to do online because it’s very helpful,” he said.

Hemo said that the lessons’ online status will be a resource for years to come.

“If in a year or five you need it, the education will be on the internet,” she said. “It’s not only in these conditions."