The number of coronavirus cases among migrants on Lesbos rises to four, raising fears of a large outbreak in the Greek island's overcrowded camps. 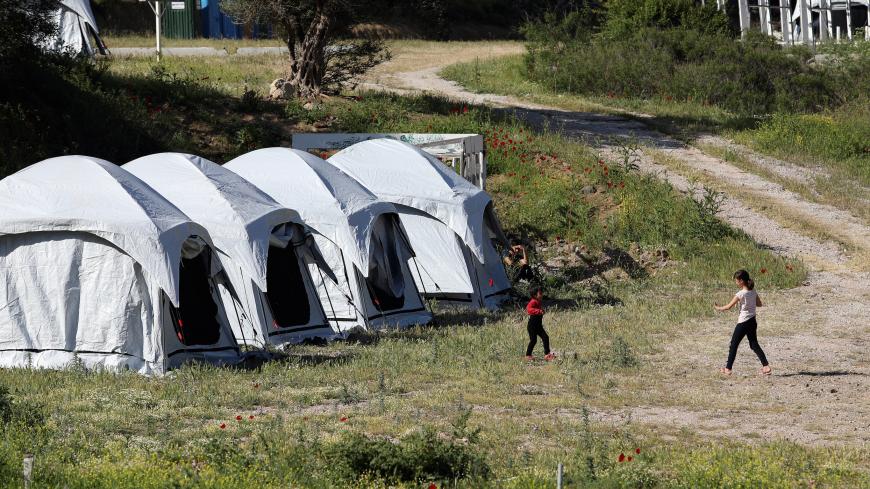 Two girls play next to tents at a temporary camp for newly arrived refugees and migrants where COVID-19 cases were detected, on the island of Lesbos, Greece, May 13, 2020. - REUTERS/Elias Marcou

Two more migrants in Lesbos have tested positive for coronavirus, bringing the total number of infections on the Greek island to four, according to a report from Reuters.

On Tuesday, Greek officials reported the island’s first two cases of the virus. The infected were among a group of 70 asylum speakers who arrived from Turkey on boats last week.

Nearly 40,000 migrants from the Middle East and North Africa remain stranded in overcrowded camps on Lesbos and four other Greek islands. Migrants arriving after March 1 have been quarantined in separate facilities, and a lockdown imposed on the camps has been extended until May 21.

Rights organizations have accused the Greek government of failing to do enough to protect the camps from an outbreak.

“While the Greek government is working to stop the spread of the virus, the images of the squalid conditions in camps on the islands make clear that it’s not complying with minimum preventive and protective measures against Covid-19 there,” said Belkis Wille, a senior crisis and conflict researcher at Human Rights Watch, in a statement last month.

Fewer refugees are making the treacherous journey across the Mediterranean than at the height of Europe's refugee crisis in 2015. But in late February, Turkey prompted an uptick in arrivals after announcing it would no longer stop refugees bound for Greece. In early March, a child drowned when a makeshift boat carrying 48 migrants capsized on its way from Turkey to Lesbos.