The capture of two towns and a key air base were the latest in a series of setbacks for military strongman Khalifa Hifter. 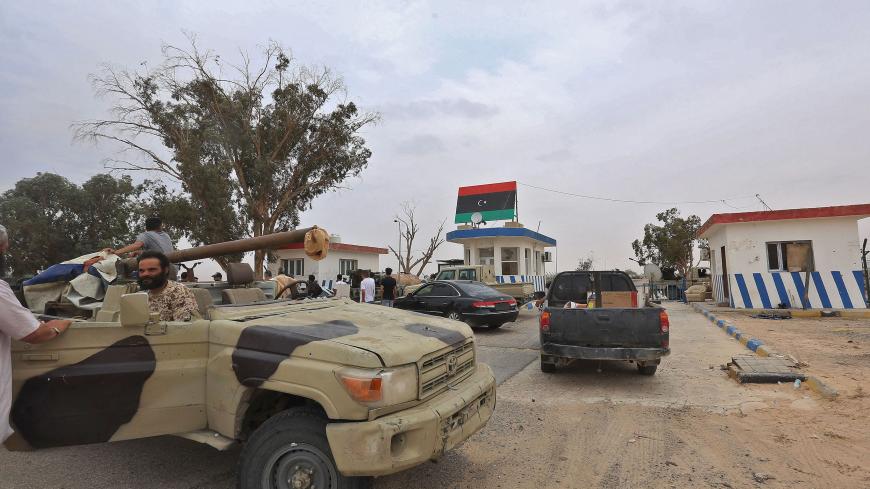 Vehicles of forces loyal to Libya's UN-recognized Government of National Accord are seen outside a checkpoint at al-Watiya air base southwest of the capital, Tripoli, on May 18, 2020, the day the forces seized the facility. - MAHMUD TURKIA/AFP via Getty Images)

Forces loyal to Libya’s eastern military strongman Khalifa Hifter withdrew from parts of Tripoli after rival troops captured two towns near the Tunisian border and a key air base from the renegade general.

A spokesperson for Hifter’s self-styled Libyan National Army said that was a "redistribution and repositioning in the battlefronts, disengaging from some crowded residential areas,” according to Reuters.

Libya has been embroiled in conflict since the ousting of dictator Moammar Gadhafi in 2011. For the past year, the Libyan National Army has been staging an offensive on the capital, Tripoli, where the internationally recognized Government of National Accord is based.

During the past nine years, some 400,000 Libyans have been displaced — about half of them this year amid the fighting in Tripoli.

The fighting has escalated in the past month as Hifter, backed by Egypt and the United Arab Emirates, lost ground to Government of National Accord troops supported by Turkey. The United States, meanwhile, accuses Russia of further inflaming the conflict by sending mercenaries to fight on behalf of the eastern Libyan commander.

Government of National Accord forces took the strategic al-Watiya air base Monday from forces loyal to Hifter, leaving the eastern general without an airfield near Tripoli and without two Russian-made Pantsir air defense systems.

“His backers — the UAE, Russia, Egypt, Jordan — would be wise to reconsider trying to undermine Libya's democracy,” Bashargha wrote.

Last week, seven UN agencies called for the rival factions to agree to a lasting truce, warning the escalating violence could leave Libya highly vulnerable to a coronavirus outbreak. Libya has so far registered 68 cases of the virus and three deaths.

“The international community must not turn a blind eye to the conflict,” the agencies wrote in a joint statement.