Netanyahu’s future coalition, without the settlers?

Prime Minister Benjamin Netanyahu got the recommendation of 72 Knesset members for him to form and lead Israel’s next government, but the list does not include the signatures of his allies from the Yamina party. 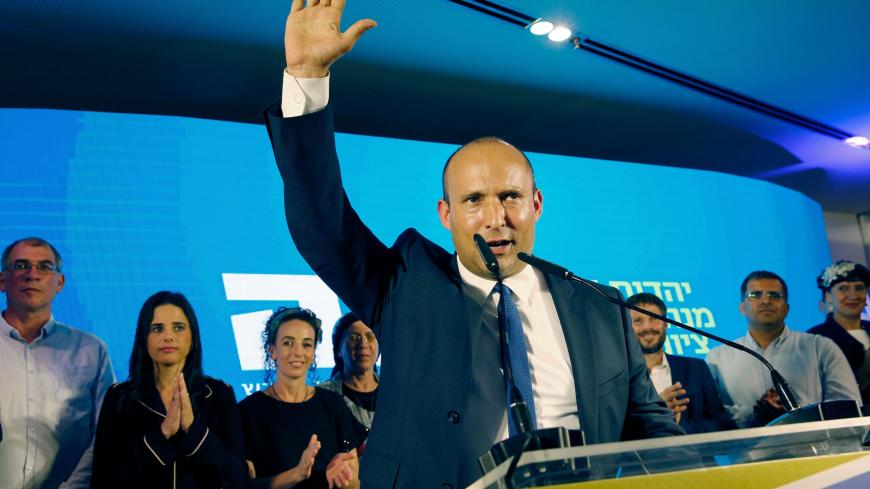 Naftali Bennett (C), a candidate for the New Right party that is part of the Yamina political alliance, speaks at the alliance's headquarters in Ramat Gan, north of Tel Aviv, Sept. 17, 2019. - GIL COHEN-MAGEN/AFP via Getty Images

With the High Court greenlighting Prime Minister Benjamin Netanyahu to form the next government, representatives of the Likud and Blue and White parties submitted the signatures of 72 legislators endorsing Netanyahu for the task the afternoon of May 7. The list of signatures was given to President Reuven Rivlin only hours before the midnight deadline for the Knesset to propose its own candidate. Three hours after receiving the signatures, the president tasked Netanyahu with the mission.

Earlier in the day, the Knesset adopted amendments to two basic laws, enabling the two parties to go ahead with the April 20 unity deal signed by Netanyahu and Blue and White’s Benny Gantz. These amendments are designed to guarantee a rotation between Netanyahu and Gantz 18 months from now, and for the establishment of the largest-ever government in the history of the country.

Netanyahu and Ganzt plan for the new government to be sworn in May 13. Gantz is expected to serve as defense minister.

Knesset members of the Likud, Blue and White, Derech Eretz faction, Gesher faction, the two ultra-Orthodox parties Shas and Yahadut HaTorah, as well as two out of three Labor members made up the 72 signatories. The six members of pro-settler Yamina party did not sign the endorsement, and did not show up at the Knesset plenum either.

In recent days, Yamina has expressed apprehensions over the policies expected to be adopted by the new coalition, and about handing over key posts to Blue and White such as the Justice Ministry and the Economy Ministry. Yamina has been pressuring the prime minister for increased influence in the new government. Its leader, Defense Minister Naftali Bennett, made a pitch on May 5 for the Health Ministry, saying the position was a mission of national importance.

Netanyahu is not inclined at the moment to hand Yamina key portfolios. With the 36 ministries divided equally between Likud and Blue and White, he must satisfy his own associates first, as well as some other coalition partners.

There also is the issue of President Donald Trump’s peace plan. Netanyahu intends to present for a vote a proposal for implementing Israeli sovereignty on West bank settlements as soon as this summer. This possibility is anchored in the unity government deal. But statements from US senior officials in recent days have made clear there would be a price to pay for Washington to endorse such a move, mainly in the form of asking Palestinian President Mahmoud Abbas to renew peace talks. This is a precondition that Yamina could probably not swallow.