Iran’s total coronavirus cases have jumped 50% after taking measures to open up the country. 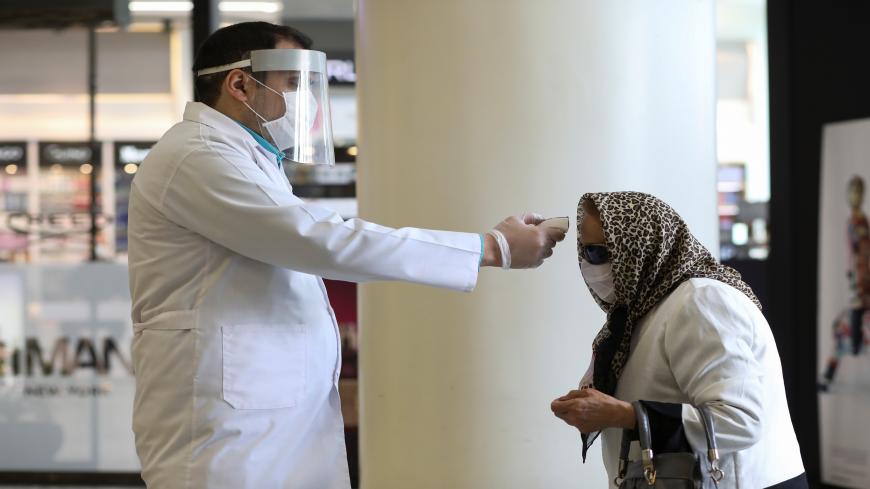 A man wears a face mask and a protective face shield as he checks a woman's temperature, to let her go inside the mall, following the outbreak of the coronavirus, after shopping malls and bazaars reopened in Tehran, Iran, April 20, 2020. - WANA (West Asia News Agency)/Ali Khara via REUTERS

According to Ministry of Health spokesman Kianoush Jahanpour, Iran registered 1,485 new cases over the last 24 hours, bringing the total of confirmed cases to 103,135. Since yesterday, 68 deaths have been reported, bringing the total number of deaths to 6,476. These figures do not take into account individuals who stayed home and weren't tested, or those who have died of other diseases while also having the virus that causes COVID-19.

The spike in new cases is a worrying sign as the country prepares to take further steps to open up the economy. After a nearly nationwide shutdown that closed schools and mosques, prevented traffic across provinces and closed or partially closed office spaces, Iran initiated a phased reopening in so-called white spots where infection rates were low on April 11. On April 14, it seemed the country was moving in a positive direction with the lowest number of new cases being reported in over a month.

The measures taken in mid-April appeared to have been effective as far as slowing the spread of the coronavirus. During a seven-day period from April 27 to May 3, the country’s daily infection rate was 1,112 at its highest and 802 at its lowest, averaging 991 new cases a day. However, since May 3, the numbers have continued to climb. The new number of cases reported today, i.e., 1,485, is a 50% increase from this average.

The Iranian authorities, particularly the Health Ministry and the National Coronavirus Combat and Prevention Headquarters, have warned that despite the relaxing measures, the country is still not in the clear and health guidelines and preventive measures are needed.

On May 8, mosques in regions with low infection numbers will open for the first time since the nationwide shutdown. The decision to open up the mosques was made by the National Coronavirus Combat and Prevention Headquarters, which President Hassan Rouhani chairs. According to Tasnim News Agency, all but 10 of Iran’s 31 provinces will have cities with mosques that are open for Friday sermons, though not necessarily every city in those provinces will be open. Mosques in provinces that are labeled red spots will be closed still, which include the political capital Tehran, the religious capital Qom, west Azarbaijan, Ilam, north Khorasan, Zanjan, Semnan, Ghazvin, Kashan and Hamedan.

On May 16, schools will open so that teachers will have enough time to finish the curriculum and students to take their exams before the summer vacation.

Today, Rouhani said that the Health Ministry would continue to screen citizens for COVID-19. Until now, much of the screening was done via phone and referring those with symptoms to local testing centers or hospitals.