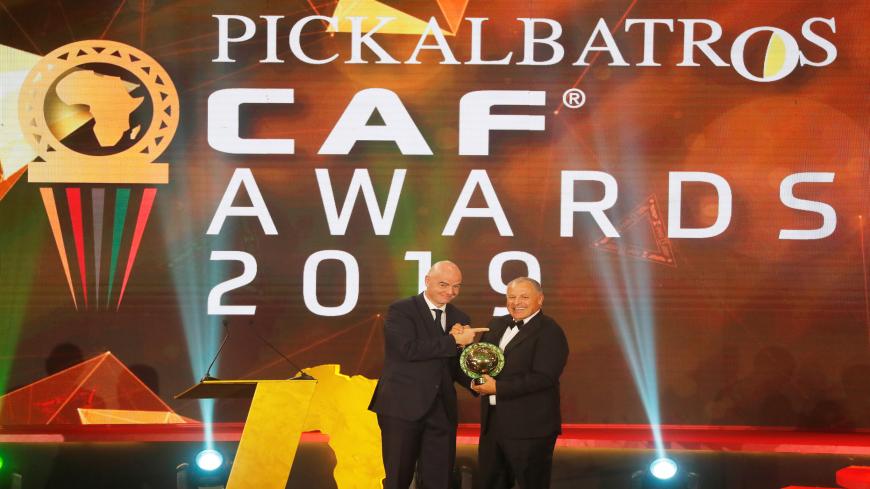 Nations participating in the FIFA 20, a soccer video game published by Electronic Arts as part of the FIFA series, would nominate two players to compete remotely, via the internet, in their respective region through Playstation 4.

The e-tournament, which ran from April 25 to April 29, comes as part of FIFA’s efforts to encourage people around the world to stay at home to stem the spread of the coronavirus. The e-tournament was aired through the official website of FIFA and its revenues and prizes were allocated as aid for those affected by the coronavirus and the ensuing lockdown measures.

On April 29, FIFA announced the victory of Saudi Arabia in the eNations StayAndPlay Cup.

In an April 20 post on his Facebook page, Sheikh, of Egypt’s Al-Ahly Sporting Club, announced his withdrawal from the competition. “I received with great happiness news that I was nominated for the FIFA eNations by the Egyptian soccer federation, but I decided to withdraw from the tournament.”

The FIFA draw had resulted in Egypt, Israel, Turkey and Romania falling into the same group.

In a short statement to Al-Monitor after his withdrawal, Sheikh said his decision was personal and not a result of pressure from the Egyptian public, the authorities or his colleagues.

“Withdrawing from the competition was not in protest against FIFA or the draw as much as it was out of my personal conviction and choice in light of the current results of the draw,” he told Al-Monitor. He said that he didn't mean to pressure FIFA to make another draw as he is aware that the federation recognizes Israel. He added that he respects FIFA’s policies, but he personally can't play in the presence of Israel.

Shortly after Sheikh’s announcement, Kouka, of the Greek club Olympiacos and the Egypt national soccer team, also announced his withdrawal on Twitter on April 21, saying, “I was really excited to [be nominated] to participate in the competition but after the draw’s result I am afraid that I can only turn it down.”

To make up for Egypt’s withdrawal from the friendlies, Al-Ahly Club launched May 5 a local e-tournament with the participation of Kouka and Sheikh.

The withdrawals of the two players triggered mixed reactions across social media. Activist Salah Badiwy hailed this step as a national heroic act, tweeting, “I salute [Sheikh], the hero who spoke on behalf of Egypt. God bless him.”

Meanwhile, others deemed the decisions as media propaganda. Journalist Anas Assar wrote in a tweet, “Sheikh is on the Ultimate Mood [a FIFA game for professionals]. I am sure he has been playing against some Israelis, regardless of the e-championship.”

On April 22, the Israeli Ministry of Foreign Affairs responded to the withdrawal via the Israel Speaks Arabic Facebook page. “Players are confusing sports with politics at the expense of the coronavirus victims,” the post read.

Al-Monitor tried to contact FIFA to learn about any repercussions to a country’s withdrawal from a competition, but has yet to receive a response.

A source from the Egyptian Football Association (EFA), however, told Al-Monitor on condition of anonymity that any withdrawal from e-competitions, especially friendly games such as the StayAndPlay Friendlies, does not entail any punitive measures regarding the nominated players or clubs in the respective countries.

In an official statement April 21, the EFA apologized for not being able to participate in the FIFA e-friendlies, stressing that all draws’ possibilities should have been taken in consideration, in reference to falling into the same group with Israel or Turkey. Israel and Egypt had been at war from 1948 until 1973, while Cairo’s relations with Ankara have been recently strained since the Egyptian armed forces overthrew Muslim Brotherhood-affiliated Egyptian President Mohammed Morsi on July 3, 2013, following the country’s largest protests. Ankara considered Morsi’s ousting as a military coup, disregarding the June 30, 2013, popular protests.

An EFA source told Al-Monitor that in light of the refusal of Egyptians and major clubs in Egypt to participate within the same group as Israel, the EFA decided to heed their demands and not nominate new players, especially since no punitive measures will be imposed on Egypt in case of withdrawal.

Al-Ahly Club director Sayed Abdel Hafeez said in an April 20 statement that the club did not agree to Sheikh’s nomination in the first place, as the EFA did not request the club’s prior approval to this effect.

Meanwhile, Hassan al-Harithi, a sports critic, commented on the players’ withdrawal from FIFA 20, saying that withdrawing from tournaments because of the participation of hostile countries would eventually lead to the isolation of Egypt at the global level. “These countries have representation in FIFA and it is possible that Egypt would face them off in other championships and tournaments, where withdrawals could entail sanctions as in the World Cup,” he told Al-Monitor.

“The withdrawal from the FIFA e-game should serve as an opportunity to discuss the rules of participation in international competitions and to stress that refusing normalization of relations should not lead to Egypt’s isolation. Many Arab countries have come to realize the importance of separating between the rejection of normalization [with hostile countries] and the repercussions that might lead to isolation,” he concluded.