Saudi Arabia has expanded its investment in the sports sector in Egypt by pumping millions into financing clubs and youth sports activities, a move that has triggered public resentment among some who see it as a means of gaining influence. 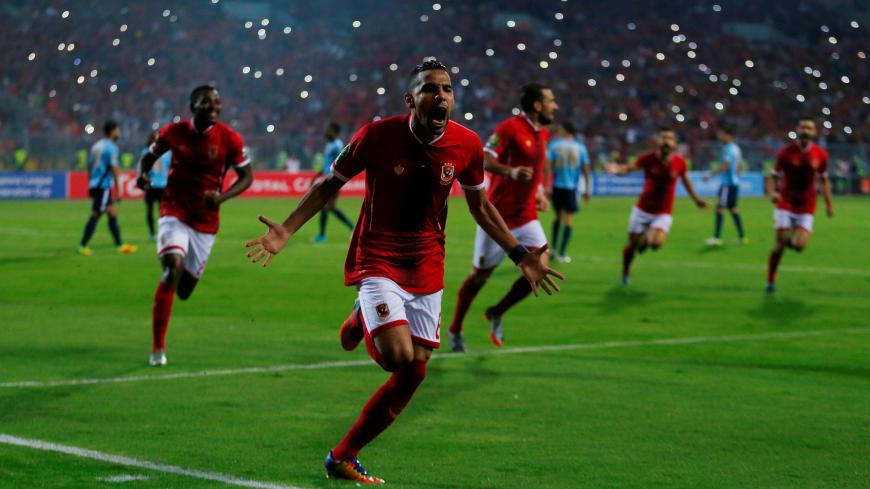 CAIRO — Saudi Arabia recently expanded its investment in the sports sector in Egypt. Turki al-Sheikh, chairman of Saudi Arabia's General Sports Authority and head of the Saudi Arabian Olympic Committee, announced March 20 a Saudi-Egyptian action plan to support Egypt’s ability to organize the World Cup in the near future.

Sheikh’s repeated attendance of Egyptian public events, in addition to his honorary presidency of Al-Ahly soccer club and the large amounts of money he spends (unlike his predecessors), has sparked criticism and raised questions about the goals behind the Saudi spending plan on the sports sector in Egypt.

Sheikh has played a remarkable role in funding sports projects such as the “Project of the Century,” which is the construction of a new stadium for Al-Ahly soccer club. Mahmoud al-Khatib, chairman of the soccer club, announced the project at a press conference on Dec. 31, 2017. Construction of the stadium is expected to take 30 months.

Following a meeting with Sheikh, head of Zamalek soccer club Mortada Mansour said in a press statement on Dec. 31, 2017, that an integrated sports city will be built in Giza, on the southern outskirts of Cairo.

Saudi Arabia has pumped millions of dollars into several large sports projects in Egypt and facilitated the move of professional athletes to Saudi teams, making them generous offers. The kingdom has launched sports championships for Egyptian youths and brought important players to support Egyptian teams in local and international championships. Soccer midfielder Momen Zakaria, for instance, was transferred on Jan. 4 from the Egyptian Al-Ahly club to Al-Ahly in Saudi Arabia. He joins the Saudi club for a fee of $400,000 on a six-month loan deal.

On Dec. 30, Egyptian President Abdel Fattah al-Sisi met with Sheikh in Cairo. Saudi Ambassador to Egypt Ahmed Kattan attended the meeting that focused on bolstering cooperation between the two countries in different sports by working on joint sports investment projects and increasing the exchange of expertise and sports delegations.

The Egyptian Al-Ahly club announced Dec. 31 the appointment of Sheikh, who is the adviser to the Saudi royal palace, as honorary president for the club. Zamalek followed suit on March 16 by giving Sheikh the honorary chairman position in return for building the new stadium.

When asked about the reasons behind financially supporting Al-Ahly, Sheikh said in a TV interview Dec. 31, “We see Al-Ahly club as an investment opportunity. It is a successful investment for us with 80 million fans and several championship wins. It is the African club of the 20th century. It is our gain, not yours.”

Some believe that Saudi’s expansion in investments and financial grants in the field of sports are an indirect attempt to increase Saudi’s political influence in Egypt through the flow of financial support.

Hani al-Asar, researcher at Al-Ahram Center for Political and Strategic Studies, told Al-Monitor that Saudi financial investments in Egypt’s sports sector are a way to expand the kingdom’s influence in the country. He said that Saudi’s projects in support of Al-Ahly club — the most popular soccer team in the Middle East — have turned from love for the team, as shown in the past by some Gulf princes, to control of Egypt’s sports decisions. “The kingdom is playing a systematic role in increasing its influence in Egypt,” he noted.

Asar added, “The significant expansion in Saudi investments in the sports sector — especially in soccer — is only natural. Soccer is a popular game and Egyptian teams have a wide public base. Through its financial support, Saudi Arabia garners public support and achieves more influence on the public opinion, thus constituting a gateway for it to control others sectors.”

He said that Sheikh’s recent steps in funding and supporting Egyptian team deals are a weak spot in Egyptian-Saudi relations, noting, “A Saudi official pumping money [in Egypt's sports activities] is a way to gain control rather than cement relations.”

Meanwhile, former Egyptian Minister of Youth and Sports Abdel Moneim Omara told Al-Monitor over the phone that affluent Saudis do not support Egyptian teams financially, except when asked, despite the financial crisis these teams have been experiencing after the floatation of the Egyptian pound against foreign currencies.

He did note, however, that the Gulf financial support for Egyptian sports has been around for years, whether in the form of financial grants or assistance. He added, “The public resentment toward this Saudi financing might be due to the fact that financial support has become a theatrical show and that Sheikh should not be pictured as such.”

Yet it seems that Saudi Arabia’s increased investments in Egypt’s sports sector cannot be separated from the kingdom’s attempt to cement its influence in the decision-making circles. Saudi Arabia has also been exhibiting increased interest in becoming the only influencer in Egypt by putting on a show that has annoyed many Egyptian soccer fans.