Democrats are drafting new legislation that would force the Donald Trump administration to declassify a report on Khashoggi’s murder, potentially implicating the crown prince. 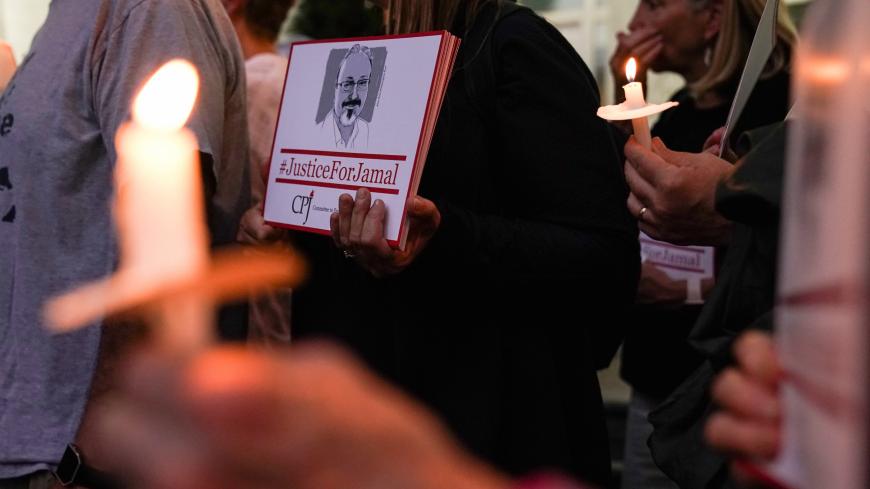 The Committee to Protect Journalists and other press freedom activists hold a candlelight vigil in front of the Saudi Embassy in Washington on Oct. 2, 2019, to mark the one-year anniversary of the killing of journalist Jamal Khashoggi at the kingdom's consulate in Istanbul. - REUTERS/Sarah Silbiger

Jamal Khashoggi’s family may have publicly forgiven the eight men Saudi Arabia had convicted in the journalist’s 2018 assassination, but that has done little to take Congress’ eye off Crown Prince Mohammed bin Salman’s alleged role in the murder.

Democrats are doubling down on efforts to force the Donald Trump administration to publicly release a report on every Saudi official complicit in the murder, which could include the crown prince himself. A United Nations report found “credible evidence” that Prince Mohammed was involved in the journalist’s murder. The CIA has reportedly reached a similar assessment.

“There can be no accountability for the brutal murder of Jamal Khashoggi until the administration makes public what the US government knows regarding who in the Saudi government ordered, carried out and attempted to cover up the killing,” House Intelligence Chairman Adam Schiff, D-Calif., told Al-Monitor in a statement. “Congress will need to take further legislative and budgetary steps to ensure declassification of a report the intelligence community provided to Congress earlier this year.”

Last year’s defense authorization bill required the Trump administration to submit an unclassified version of the list to Congress. The initial bill also included a provision that would have sanctioned every Saudi official named in the report. While that veto-proof provision passed the House 405-7, the final bill did not contain sanctions amid opposition from the White House and its Senate Republican allies.

The Trump administration refused to give Congress an unclassified report per the law. Instead, the intelligence community submitted a classified version in February, arguing that publicizing it would jeopardize “sources and methods.”

A House Democratic aide who did not want to be identified told Al-Monitor, “We are unaware of any harm to US national security that would result from declassifying the February report.

“This is especially the case because the [intelligence community] should be able to rely on a broad range of sources and reporting to reach analytical conclusions consistent with what is outlined in the annex,” added the aide. “The administration’s failure to comply with the law [that] required an unclassified report on Khashoggi gives rise to concerns that [the Office of the Director of National Intelligence] is using the classification process impermissibly in order to shield information of public interest.”

Former Senate Intelligence Committee Chairman Richard Burr, R-N.C., who stepped down earlier this month, urged the Trump administration to declassify the report in a letter alongside the panel’s top Democrat, Mark Warner, D-Va., earlier this year.

And one Intelligence Committee member, Sen. Ron Wyden, D-Ore., has threatened to take advantage of a little-used Senate mechanism that would trigger a vote on declassifying the report. Wyden has yet to trigger the vote on the committee, and his office did not respond to Al-Monitor’s request for comment.

Still, the Oregon senator did list Intelligence Director John Ratcliffe’s refusal to commit to declassifying the Khashoggi report during his confirmation hearing as one of his reasons for voting against his nomination. The Senate nonetheless confirmed Ratcliffe in a 49-44 party-line vote last week.