Despite government measures to help those most affected by a general lockdown aimed at containing the spread of the coronavirus, Tunisia’s economy is being dealt a heavy blow. 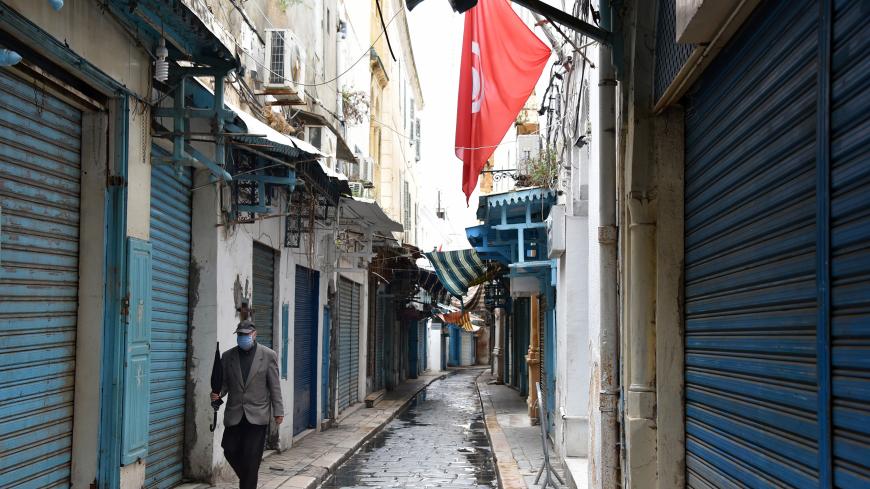 A man wearing a protective face mask as a preventive measure against the spread of coronavirus walks through an alley of the souk in the Medina, Tunis, Tunisia, Apr. 20, 2020. - Jdidi Wassim/SOPA Images/LightRocket via Getty Images 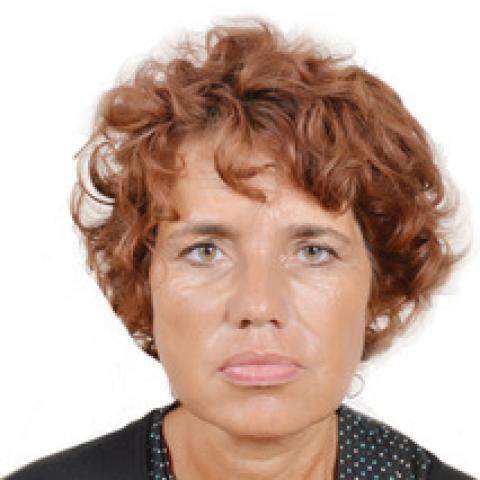 Tunisia’s initial two-week coronavirus lockdown will continue until May 3 amid growing fears over its economic impact. Health Care Minister Abdellatif Mekki claims the country has overcome with minimal damage the critical phase of the epidemic. But the restrictions hurt the economy immensely, with the International Monetary Fund projecting a 4.3% fall in economic growth in 2020.

“This is the country’s deepest economic depression since its independence from France in 1956,” Lotfi Saibi, economic analyst and founder and director at 4D Leadership House (a consultancy agency in Tunis), tells Al-Monitor.

The general lockdown brought Tunisia's economy to a near halt. Only essential businesses such as groceries, medium-sized supermarkets and pharmacies are allowed to remain open. City to city travel is banned. On March 22, when the decision came into effect, the country reported 54 positive cases, relatively low compared to other countries. However, the drastic decision was deemed vital to enable the weak public health service to cope with the outbreak. The number of cases has risen to around 879 as of April 20.

The health care sector alerted the government about a serious equipment shortage and said Tunisia could not handle numbers similar to Europe. “At the moment we don't need money, but rather medical equipment. That's essential. It is urgent,” former Minister of Health and head of the pneumology department at the Rabta hospital Samira Merai Friaa told La Presse on March 21.

With fewer than 258 intensive care unit beds unevenly distributed across the country for around 12 million inhabitants — the south and east have no beds at all — the country's health care capacity is extremely limited.

In a bid to soften the economic repercussions of the lockdown and protect jobs, the government vowed financial assistance to low-income families, food distribution to less-privileged areas and incentives to help businesses. Within the past four weeks, 1 million people have received the social assistance benefit of 200 Tunisian dinars (about $69), Prime Minister Elyes Fakhfakh said in a televised address March 31 to the nation over the lockdown extension.

While polls show strong public support for the lockdown — 91% of Tunisians support the restrictions — analysts say the measures are disproportionately affecting the less privileged.

“I am positive such a drastic decision was demanded by the most privileged, heavily influenced by reporting in the media on the propagation of the virus in Europe,” political scientist and essayist Amine Snoussi tells Al-Monitor.

Snoussi says the lockdown particularly hits the people working in the country’s informal economy who have not been included in the government's package of economic support measures. According to the International Labor Organization, around 53% of the total labor force of Tunisia works in the informal sector.

“It’s a crime. Hundreds of thousands of people working in the informal sector are completely left to their own devices,” Snoussi says, adding, “Besides, the monthly social assistance benefit of 200 Tunisian dinars per month per family is largely insufficient to meet the people’s needs, as prices have risen tremendously.”

As the fulfillment of promised financial support was slow to materialize, social tensions emerged. Thousands of workers protested despite the lockdown for protection from the economic hardships caused by the countrywide shutdown. On that same day, March 31, despite the protests, the government announced the extension of the lockdown by two weeks.

According to Saibi, the shortcomings in the implementation are due to the country’s continued inability to undertake serious steps to change its public administration. “It’s the price for stalling key reforms since the 2011 revolution,” Saibi says. “The bureaucracy is the biggest bottleneck, exacerbated by a lack of coordination and internal conflicts of interest,” he adds.

With the lockdown being extended, the number of citizens who have to resort to relief from the Tunisian state increases. A recent survey published by the Tunisian Union of Industry, Commerce and Handicrafts (UTICA), the country’s biggest representative of the private sector, indicates that only 36.6 % of employers expect to be able to continue paying their employees in May. To support the employers, the government agreed with UTICA to pay 200 dinars of April salaries for each employee, while the rest of the remuneration will be paid by the company.

“For each month that the lockdown continues, unemployment will rise [by] 5%,” Saibi predicts. If that’s accurate, unemployment in May, after almost two months of lockdown, will have soared from 15% to 25%, i.e., a quarter of the Tunisian workforce.

The worldwide coronavirus lockdown uncovers the vulnerability of Tunisia’s economic structure. Since the 1970s, Tunisia’s economic development policy has been based on those sectors that bring in foreign currency (mining, services, tourism and international transport) as a strategy to strengthen its economic competitiveness. According to a study by former Minister of Economy and Finance Hakim Ben Hammouda and economic expert Hedi Bechir, the crisis in these sectors could lead to a loss of productivity of 50%.

Saibi says the amount of 2.5 billion Tunisian dinars — about $862,000, or 2% of the gross domestic product — earmarked to cover the costs of the economic support measures will be well below what is needed.

“I expect at least double is needed, and even then, the state will have to make stark choices; 95% of companies are small- or medium-sized and have no reserves,” the economic analyst says.

The country must depend on its international donors to finance the package. The International Monetary Fund (IMF) executive board approved a $745 million emergency assistance loan under the Rapid Financing Instrument. In addition, the European Union granted Tunisia 230 million euros ($273 million), Italy pledged to donate 50 million euros ($55 million), while the Jeddah-based Islamic Development Bank has announced plans to lend Tunisia $280 million. The IMF expects the public and external debt to reach 89% (from 77.1% in 2019) and 110% (from 92.8% in 2019) of the GDP in 2020, respectively.

This will inevitably lead to social unrest. In 2019, Tunisia’s largest labor union — the Tunisian General Labor Union — staged a nationwide strike to protest the government’s refusal to raise the salaries of 670,000 public servants, as a result of pressure from the IMF to freeze public wages. The minimum wage in Tunisia is 15.50 Tunisian dinars ($5.35).

Snoussi warns against prolonged instability. “The Tunisian state has been weakened for various reasons for a very long time, and excessive and unjust decisions such as the lockdown could ruin it,” he says.

But Saibi sees no other option. He says, “Since the state has done nothing to tackle corruption, amongst others, we have no reserves.” 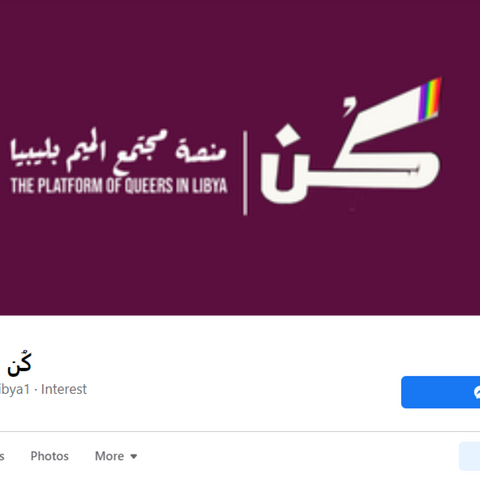 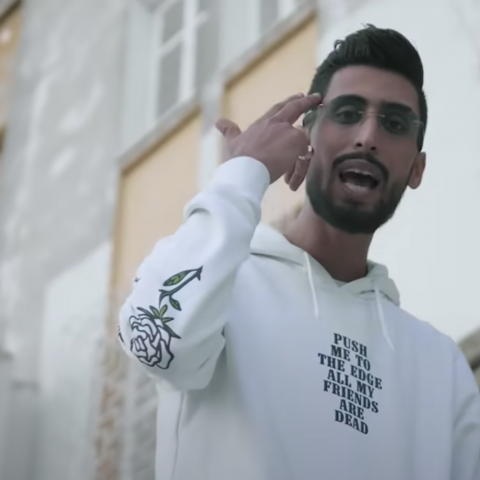