Lebanon's president said he welcomed any financial assistance from "the friends of Lebanon.” 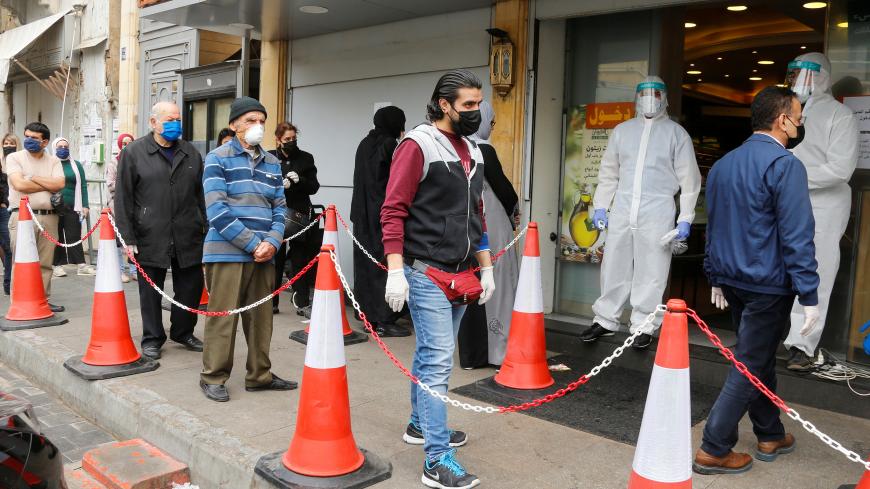 Customers wearing face masks and gloves queue outside a supermarket, during a lockdown to prevent the spread of coronavirus disease (COVID-19) in Beirut, Lebanon, April 6, 2020. - REUTERS/Mohamed Azakir

Lebanese President Michel Aoun has asked the international community to help shore up his coronavirus-struck country as it plunges deeper into economic crisis.

“We welcome any international assistance from the friends of Lebanon,” Aoun said at the presidential palace in Baabda during a meeting of the UN-created International Support Group.

Specifically, Aoun asked donor governments to free up some $11 billion in aid pledges made during a conference in Paris in 2018. The $10.2 billion in loans and $860 million in grants were conditional on Lebanon making long-overdue reforms and public-spending cuts that donors say Beirut has not yet implemented.

“Given the danger of our current financial situation, and its significant economic impact on nationals, residents and refugees, our reform program will need external financial support,” Aoun said of Lebanon, one of the world’s most indebted countries.

The coronavirus pandemic has compounded the country’s financial crisis. The economic downturn — considered Lebanon’s worst in decades — was brought on in 2019 by dwindling dollar reserves, a plunge in the currency’s value and a sharp decline in foreign investment. On April 2, the World Bank announced it had approved a $40 million loan to help Lebanon fight COVID-19.

Nationwide anti-government protests over perceived government corruption, high youth unemployment and a lack of basic services erupted in October. Lebanese Prime Minister Hassan Diab, who has promised to address the concerns of the protesters, pledged a wide-reaching rescue plan that his office says will include commitments to long-stalled reforms.

During Monday’s meeting, Aoun also pointed out that since 2011 Lebanon has taken up to 1.5 million refugees from neighboring Syria, who, along with tens of thousands of Palestinians, have put additional strain on the country’s finances. Aoun warned of a humanitarian disaster should the coronavirus reach Lebanon’s overburdened refugee camps.