Some of Istanbul's most vulnerable people, including Syrian child refugees, are still out on the streets day and night, braving the pandemic to earn a living. 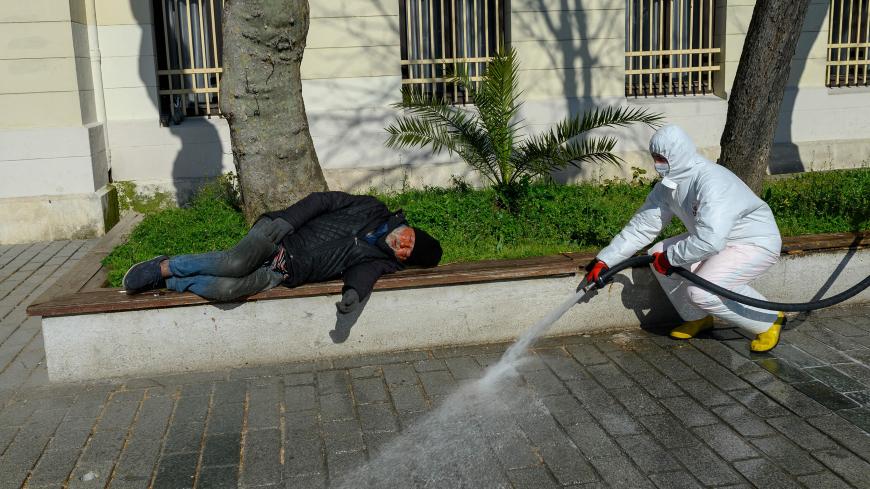 Though Istanbul's busiest districts have emptied amid the accelerating number of coronavirus cases and bars, nightclubs, shops and cafes across the country have been shut down by the government, some of the most vulnerable people in the city are still on the streets struggling to earn a living.

Istanbul's street children are still out day and night selling packets of tissues or playing music on the street and on public transportation vehicles for tips. They do not have the luxury of social distancing, as their families depend on them to earn money to survive.

One late Friday evening on the normally packed Istiklal Avenue, some of the only people around were a couple groups of street children, running around and playing with bags of tissue packages still in hand, evidently trying to have a bit of fun after a grinding day of work.

Many of them are Syrian refugees, who have quickly picked up Turkish and frequent the districts of Beyoglu and Sisli, where there are usually high numbers of Arab tourists that they can also communicate with.

There are also children from other disenfranchised groups, such as Turkey's Roma community, who are relatively better off than their counterparts in Europe but still some of the most disadvantaged people in Turkey.

“There aren’t statistics on the number of street children, whether Syrians or from other nationalities,” said Omar Kadkoy, policy analyst at the Ankara-based Economic Policy Research Foundation of Turkey. "The underlying reason, however, for the children to be in the streets begging and/or selling whatever they can carry is economic in nature. Syrians work predominantly informally in the labor market. Hence, being subject to various forms of exploitation, namely, below minimum-wage salaries. Therefore, and under similar conditions, children become breadwinners.”

Thousands of informal recyclers pull large wheeled carts, deftly maneuvering through the city while rummaging through garbage dumpsters to collect paper products and other materials that they resell. Until a few years ago, this grueling job was primarily carried out by Turkish nationals but nowadays large numbers of migrants, particularly those from Afghanistan and Pakistan, also work as recyclers. They put in long hours and make multiple runs, stuffing their carts to the brim as they get paid by weight.

Ankara recently banned the practice as a measure against the novel coronavirus, but so far it appears that Istanbul has not done so, and on April 1 several recyclers were observed busily hauling their carts in the district of Sisli.

While Istanbul's street children and the recyclers work day and night throughout the city, the vast majority do not actually reside on the street, but by and large return to homes either in peripheral, crowded working-class districts such as Esenyurt, Esenler, Bagcilar and Gungoren or poor, stigmatized neighborhoods in the city center such as Tarlabasi, Dolapdere, Haciahmet, Hacihusrev and Kustepe.

The actual number of homeless people in Istanbul is relatively low. A survey released by the opposition Islamist Saadet, or Felicity Party, late last year indicated that there are 6-8,000 people living on the streets in Istanbul, a city of nearly 16 million. According to the report, 90% of the homeless people in Istanbul are men and 70% are Turkish nationals, with the remaining 30% primarily from Morocco, Uzbekistan, Palestine and Syria.

Street children, recyclers, beggars and street vendors are among the groups most vulnerable to the coronavirus, due to the long hours they spend outside and their constant contact with people. They also risk spreading the virus in the dense, impoverished and often structurally unsound areas in which they reside, where homes often lack electricity and running water.

There are insufficient educational resources in Turkey in spite of support programs that are in place, contributing to the prevalence of child labor, Kadkoy told Al-Monitor. “While combating the informal employment of the parents is rather a complex subject, supporting children to attend school is more feasible. This is the aim of the Conditional Cash Transfer for Education (CCTE), which is implemented under the partnership of the Ministry of Family, Labour and Social Services, the Ministry of National Education, the Turkish Red Crescent and UNICEF and funded by the EU, Norway, and the US. The CCTE program extends monthly financial support and girls are entitled to more money so that children attend school,” Kadkoy said.

“One shouldn’t overlook the fact that there are structural problems in the public schooling system, namely lack of enough spaces, that add to children being on the streets,” he added.

The opposition right-wing Iyi Party's chair Meral Aksener recently announced that she was sending six months of her salary to the main opposition Republican People's Party (CHP) mayors of Istanbul and Ankara. She criticized President Recep Tayyip Erdoğan and the ruling Justice and Development Party for failing to provide assistance to local municipalities, which she says have been “left alone by the government” in their efforts to combat the epidemic.

On the other hand, the city leaderships have a responsibility to protect refugees and other vulnerable groups, Kadkoy said.

“In his campaign, [Istanbul Mayor] Ekrem Imamoglu prioritized refugee women and children. Now, the mayor has a challenging opportunity to stand out as a politician who makes good on his promise,” Kadkoy said.

Ultimately it is up to the government agencies to ensure that Turkey's refugee population, which has surpassed four million and is not limited to Syrians but includes several hundred thousand people from other countries, is informed about the coronavirus.

The Ministry of Health in conjunction with the migration directorate and various nongovernmental organizations are circulating multilingual information to different refugee communities regarding the virus, Kadkoy said, explaining, "This is important for asylum seekers and refugees from different backgrounds to receive accurate information. Most importantly, in this situation, we must not allow a fight between birthrights and human rights to emerge. Everybody in Turkey must have equal rights to access necessary health services if they contract the virus."