Prime Minister Benjamin Netanyahu said he was confident that President Donald Trump will let the Israeli government annex parts of the West Bank, as stated in the American peace plan. 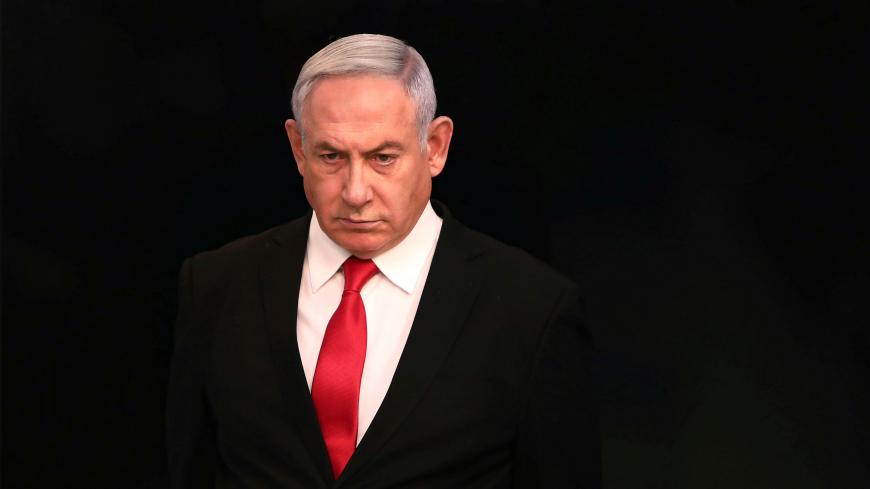 Israeli Prime Minister Benjamin Netanyahu arrives for a speech at his Jerusalem office regarding the measures that will be taken to fight the coronavirus, March 14, 2020. - Gali Tibbon/Pool via REUTERS

Prime Minister Benjamin Netanyahu said April 26 that he was confident that President Donald Trump will enable the Israeli government to apply Israeli sovereignty over parts of the West Bank within a few months. Netanyahu, addressing by video a conference organized by the European Coalition for Israel lobbying group, said, “Three months ago, the Trump peace plan recognized Israel’s rights in all of Judea and Samaria [the biblical name of the West Bank]. And President Trump pledged to recognize Israel’s sovereignty over the Jewish communities there and in the Jordan Valley. A couple of months from now, I’m confident that that pledge will be honored.’’

Netanyahu is currently busy passing legislation at the Knesset that would allow the Likud and Blue and White to form a new government. So why was the prime minister in such a rush to bring up the controversial annexation issue again?

One reason is a domestic one: Netanyahu wants to lock Blue and White into an annexation policy, even though the party is hardly enthusiastic about this. The unity agreement says that Netanyahu can raise the issue in the near future and that any such proposal would be brought to the Knesset for approval, with each coalition party free to vote as it deems appropriate. This was the escape path Blue and White leader Benny Gantz guaranteed for himself and for his party.

On the international level, Netanyahu’s statement was made just a few days after US Secretary of State Mike Pompeo said the decision on annexation is in Jerusalem’s hands. "That's [annexation] an Israeli decision. And we will work closely with them to share with them our views of this in [a] private setting," Pompeo said.

Palestinians saw the two statements as being coordinated.

Palestinian and Jordanian leaders also recently launched a diplomatic blitz against Israel’s intention to assume sovereignty over parts of the West Bank. According to reports, Jordanian Foreign Minister Ayman Safadi spoke with counterparts from Russia, Germany, Egypt, Japan, Sweden and Norway in an effort to engage them in the Palestinian anti-annexation campaign.

The United Nations and the European Union have warned Israel on several occasions in recent weeks not to annex parts of the West Bank. UN special Middle East envoy Nickolay Mladenov warned April 24 that such a move would be a "devastating blow" to the internationally backed two-state solution to the Israeli-Palestinian conflict.

Netanyahu’s April 27 statement evidently shows that Jerusalem is engaged in a blitz of its own, designed to put the issue on the international table several months ahead of any concrete move. Some see this an effort to exhaust the international community and to make clear that Israel and the United States have already decided to go ahead with annexation, no matter what.