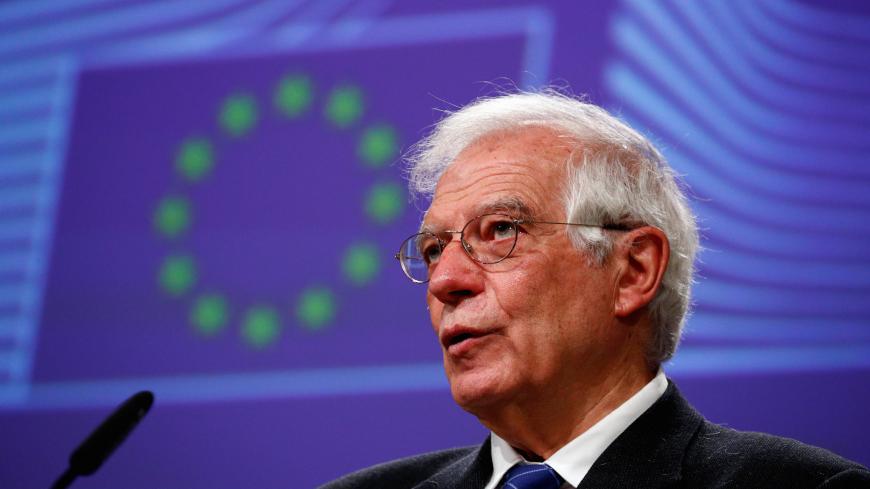 Israeli Foreign Minister Israel Katz on April 23 slammed Josep Borrell, the European Union’s high representative for foreign affairs, for personally reiterating the EU’s opposition to Israel's annexation of areas on the West Bank. Targeting Borrell, Katz remarked in a statement, “It’s unfortunate that Josep Borrell, who pretends to be responsible for the foreign relations of the European Union, chooses in this manner to welcome a new government over a central partner to the EU and prefers to see relations between Israel and the EU through the prism of the [COVID-19] pandemic and the ‘status of the territories.’”

Katz also questioned the legitimacy of Borrell going on the offensive against Israel, arguing that Brussels has failed to mobilize support from all the EU member states on the issue. “We wonder which states the honorable gentleman is choosing to represent,” Katz said mockingly. He then thanked unidentified EU members for not backing Borrell’s statement.

European diplomats had recently been delivering messages to Blue and White leader Benny Gantz urging him not to agree to annex parts of the West Bank in coalition talks with Prime Minister Benjamin Netanyahu. Since the signing of a deal on April 20 by Gantz and Netanyahu to establish a unity government, the EU has been reinforcing its position to the future government about any such intentions.

On April 22, EU foreign affairs spokesperson Peter Stano said, “If this [annexation] proceeds, it will not be left unanswered.” Today, Borrell, in announcing the EU's readiness to closely cooperate with the new Israeli government on fighting the novel coronavirus, reiterated the warning, stating, “Any annexation would constitute a serious violation of international law. The European Union will continue to closely monitor the situation and its broader implications, and will act accordingly.”

Katz’s reaction reflects Netanyahu’s long-time strategy of trying to drive a wedge between EU member states and his view of the EU’s Brussels leadership as a political enemy. Over the past decade, Netanyahu has established close ties with Eurosceptic leaders like the far-right Hungarian Prime Minister Viktor Orban and the neo-nationalist Italian Deputy Prime Minister Matteo Salvini, mobilizing them against any type of European draft resolution criticizing Israel's occupation of Palestinian territory and its settlement policies.

Israeli diplomats stressed that Borrell’s statement had not been co-signed by the EU member states, because Hungary, Austria and several others had objected to the implied threat in the draft text. Apparently, Borrell chose to go ahead with the statement as written, in his own name, instead of forgoing the warning entirely.

A European diplomat told Al-Monitor that Brussels had wanted to adopt strong language to send a clear signal on where it stands before a new Israeli government is sworn in, with the Foreign Ministry likely headed by Blue and White's Gabi Ashkenazi, who is not a Netanyahu loyalist.