Israel's deadline after the deadline

Blue and White leader Benny Gantz has 48 hours to choose between a fourth round of elections and a unity government under conditions orchestrated by Benjamin Netanyahu. 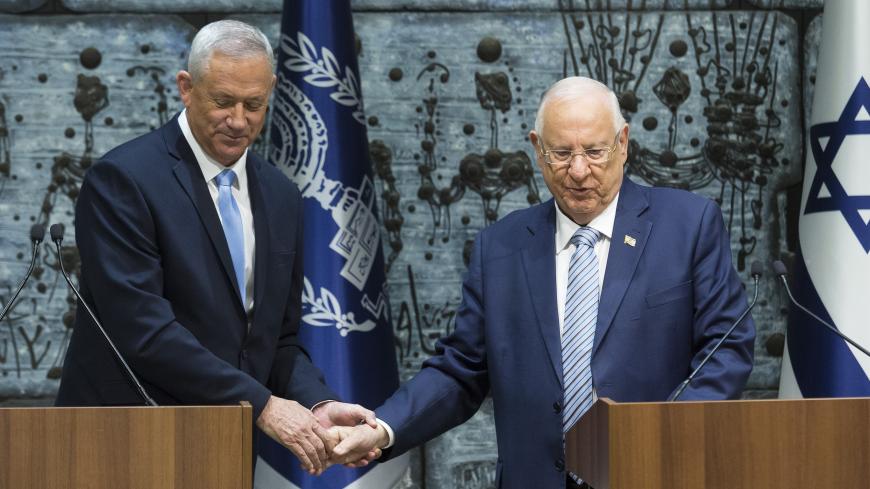 The deadline to end Israel’s never-ending political drama had been set for April 13, at the stroke of midnight, by which time Blue and White leader Benny Gantz would have conceded defeat or announced success in assembling a new government. In Israel, however, after one deadline comes another deadline. At the end of every dead end there's an escape route. At every crossroads lurks a path unknown by any GPS system. By comparison, the drama surrounding the prime minister’s residence in Jerusalem makes the “House of Cards” look like “Little House on the Prairie.”

In the early morning hours of April 14, Israeli President Reuven Rivlin agreed to extend Gantz’s mandate to assemble a government, but only for 48 hours. Usually, if a Knesset member tasked with assembling a government asks for time beyond the designated 28 days, the president should grant an additional 14 days. Given the low degree of trust in the political abilities of Gantz and in the political credibility of Prime Minister Benjamin Netanyahu, however, the president granted only two days.

If Gantz and Netanyahu don't have a deal on a unity government by midnight April 15, the mandate will go to the Knesset for another 21 days of zigzagging, libels, intrigue and conspiracies. Should no one succeed in that challenge, Israel will hold a fourth round of elections somewhere between the end of July and the end of August 2020. This is a scenario that no one on earth could have predicted a year and a half ago.

It took more than a year, but Netanyahu has finally succeeded in dismantling the rare alternative to his regime — the Blue and White, led by three former military chiefs of staff (Gantz, Moshe Ya’alon and Gabi Ashkenazi) and a former finance minister (Yair Lapid). He did it the way he prefers — with extraordinary political precision, aggressiveness and deception.

Netanyahu’s luck is that none of the opponents who successively arise against him learn the lessons of their predecessors. Netanyahu identified the “crack” in Blue and White’s leadership and then infiltrated. He knew that Gantz and Ashkenazi were worn down, realizing that there was no way to beat Netanyahu at the ballot box. In the ultimate standoff, it would be better to deal with him in reaching a unity deal, at the end of which the Netanyahu family would finally leave the prime minister's residence on Balfour Street in Jerusalem.

Opposite Gantz and Ashkenazi stood the resolute Lapid and Ya’alon, backed by Yisrael Beitenu leader Avigdor Liberman, three men aware that no deal exists that Netanyahu has failed to violate. With every Netanyahu promise reneged on, they felt it better to follow their original plan: replace the Knesset speaker, take control of the parliament through the 61 members who supported Gantz and then pass legislation targeting Netanyahu, by prohibiting criminal defendants from assembling a government. “Only that will force Netanyahu into a truly fair deal,” Liberman had told Al-Monitor. “It is the only thing that will put him in a position where he’ll have nowhere to go and will be forced to accept the decision.”

This was considered the only effective weight in Gantz’ hands that would force Netanyahu to agree to a deal with advantages for Blue and White. This was the only lever that could eject Israel’s eternal ruling family, the Netanyahus, from the sanctum they've established on Balfour Street.

Gantz, however, came hampered with a number of problems, among them naivete, a lack of political expertise, and no killer instinct. His timing was also bad. He let Blue and White implode before he had a signed agreement with Netanyahu in his hand. According to one of Gantz's associates, the Blue and White leader told him that during the early hours of April 10, he had sat opposite Netanyahu and shook hands with him. The coalition agreement was ready. All that remained was to print four copies and pour two glasses of wine. That was a few hours after Blue and White had fallen apart because of Gantz's deal with Netanyahu.

What did Netanyahu do at that point? Enjoy himself. Quickly realizing that Blue and White, his mighty opponent, had fractured in two, Netanyahu decided to make new demands in the negotiations, ostensibly small things that he supposedly recalled at the last minute. If Gantz had picked up the phone and talked to former Zionist Camp seniors Tzipi Livni, Avi Gabbai or Isaac Herzog, Presidents Barack Obama or Bill Clinton, or presidential candidates Hillary Clinton and John Kerry, among many others, every one of them would have told him that this was a tried-and-true Netanyahu technique.

When negotiating, Netanyahu always follows the same pattern: Initially, he wages a war of political attrition in the form of endless negotiations that make the person on the other side of the table ready to commit (political) suicide. Next comes agreement to a deal that he will (almost always) want to change one minute before or one minute after the last possible moment. That is exactly what happened with Gantz.

Now, Gantz is in Netanyahu’s hands. If they reach an agreement before their new deadline, Gantz might ultimately have the last laugh: a deal, if according to the already agreed-upon rotation, in which Netanyahu will have one and a half guaranteed years in power, but with an expiration date stamped on his forehead.

Netanyahu finds this difficult to swallow because current polling gives him as many as 40 mandates to Gantz's 19 if elections were held today. If the negotiations fail and a deal is not signed, Netanyahu will try to take advantage of the three weeks in which the mandate remains in the Knesset for the use of any MK who can put together a coalition. What will he do? With possibly 59 Knesset members already in his camp, he’ll try to hunt down two willing defectors from the opposing camp. There are numerous candidates, but at the moment this seems an unlikely route to success.

So if all else fails, Israel will return to elections in which Netanyahu will face only fragments of parties and weakened rivals. The great Blue and White threat has dissipated. The chiefs of staff have parted ways. The “anyone but Netanyahu” public no longer believes that Gantz can deliver. One thing is certain: Netanyahu knows that when it comes to elections, one never knows how things will turn out.