Netanyahu gets cold feet on unity government for Israel

Prime Minister Benjamin Netanyahu has backed away from the unity government plan even after Blue and White leader Benny Gantz agreed to many of his conditions. 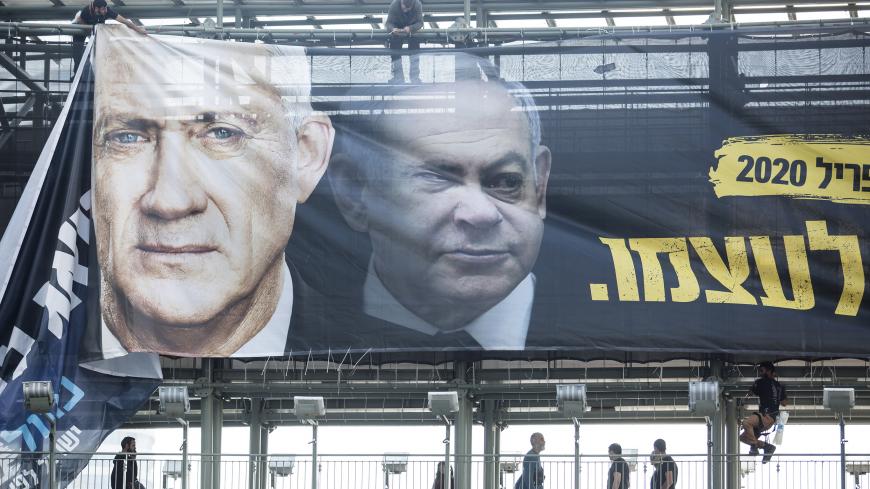 Four copies of the coalition agreement for a new unity government were printed on the afternoon of April 6. But suddenly, Prime Minister Benjamin Netanyahu retracted his agreement on who would sit on the Committee for the Appointment of Judges, signaling that negotiations had broken down. Netanyahu changed his mind while the various news channels were busy reporting on the creation of a “coronavirus government,” in which Netanyahu would end his term in office in another 18 months, and be replaced by Blue and White Party leader Benny Gantz.

On April 3, Netanyahu and Gantz met for hours on the famous patio in the prime minister’s house on Balfour Street, while maintaining a safe distance in accordance with the Health Ministry's guidelines. Most of their political and legal advisers were on the phone. Obstacles were removed one after another. The overall mood was that a great event was about to take place. Both sides seemed to want to make a deal before the Passover holiday, so they both made important concessions.

Gantz agreed to concede on the possible annexation of certain territories in the West Bank as part of the US peace plan, after first requesting that such a move require the agreement of the international community. Now he accepted Netanyahu’s demand that annexation be unilaterally brought before the government for approval. Netanyahu seemed to have given up on the right’s hold on the Committee for the Appointment of Judges and the veto he had demanded on the matter. Furthermore, Netanyahu agreed that Knesset member Avi Nissenkorn, a former head of the Histadrut labor union, would be appointed minister of justice. He also agreed to forego the reappointment of Yuli Edelstein as Knesset speaker, to be replaced by the Likud's Yariv Levin.

A solution was also found to Blue and White's concerns that Netanyahu would not comply with his commitment to give up his office at the end of the 18 months allocated to him. The fear was that he would break the government apart right before the rotation was implemented. It was decided to change the current legislation, so that Gantz would be sworn in as prime minister together with Netanyahu. This way, once Netanyahu’s term was over, Gantz would automatically become prime minister. Gantz made enormous concessions, stepping back from his promise not to sit in a government with an idicted Netanyahu, to harsh criticism from his base.

As soon as the press revealed details of the emerging agreement, the right began to attack Netanyahu for his concessions, including the one about the Committee for the Appointment of Judges. Ministers from Yamina made vicious attacks against him and his confidante Minister Levin. “A permanent government isn’t necessary to impose sovereignty. This could be done also by a caretaker government,” tweeted Transportation Minister Bezalel Smotrich, implying that control of the Supreme Court is too high a price for a unity government. Meanwhile, top journalists on the right, usually admirers of Netanyahu, attacked the prime minister on the social networks. “Nissenkorn in the Justice Ministry doesn’t go down well,” tweeted radio host Erel Segal. “Abandoning the Committee for the Appointment of Judges would leave us mourning for generations to come.”

As could be expected, the commotion on the right and on social networks got to Netanyahu and Levin. Though Netanyahu was busy preparing his statement on the novel coronavirus that he was planning to deliver right before the holiday, he found the time to make new demands. Now he insisted that the final agreement regarding his veto over the Committee for the Appointment of Judges must be reopened for further negotiations. Two advisers close to Gantz, Hod Betzer and Maayan Yisraeli, were still on Balfour Street to complete the final preparations before the agreement could be initialized. Until then, everyone had assumed that an agreement would be signed that same evening. Netanyahu had insinuated as much in his daily statement to the press about the coronavirus, saying that he believes a unity government would soon be formed, as necessitated by this time of emergency.

In response, Gantz’ negotiating team announced that it was putting a stop to the negotiations. The two sides have severed communication as of Tuesday morning, April 7, and the future of the emergency government, which had seemed a done deal, is now uncertain. It is highly unlikely that a government will be formed before the Passover holiday. The question now is whether it will be formed at all.

People in Gantz’ inner circle say that what happened was ridiculous. One of his most senior advisers told Al-Monitor on condition of anonymity, “It’s sad, but Netanyahu got cold feet because of the attacks he was subjected to from the right. It was a sealed deal. He was just scared off by [Ayelet] Shaked and Smotrich.” According to that adviser, Gantz considered a unity government to be a matter of national responsibility. He agreed to concede on the issue of annexation out of necessity.

“Now they’re telling us, ‘Hold on. There’s something else,’” said the source. “This is a red line, as far as we are concerned, so we stopped everything. Now, it’s up to Netanyahu. He needs to make a bold decision, and it’s not at all clear he has the courage to do that.”

Senior members of the Blue and White Party know it's possible that Netanyahu will withdraw from the outline altogether. “If that occurs, Gantz will appear before the public and tell them exactly what happened,” another source in the party told Al-Monitor on condition of anonymity. “He was the one who made a bold leadership decision. Once again, Netanyahu has proved himself to be a con man who shows up with his hands dirty.”

Meanwhile, Gantz is close to signing an agreement with Labor leader Amir Peretz to unite their two factions after Peretz announced last weekend that he was ending his partnership with Meretz. The merger would strengthen Gantz’ position in the Knesset after the original Blue and White Party split up.

In the current situation, Netanyahu will be unable to form another government and Gantz will continue to serve as speaker of the Knesset. In this position, Gantz will be able to advance legislation against an indicted politician forming a government, preventing Netanyahu from serving as prime minister after a new election. That kind of legislation could win a majority in the Knesset, which is already antagonistic toward Netanyahu, and involve a fourth round of elections. Netanyahu may even be trying to get there now after breaking apart the Blue and White Party, which had posed the only real alternative to his government. Polls show that he would become even stronger in yet another election.

If that happens, Netanyahu will once again prove himself a Machiavellian figure with no inhibitions, concerned only with himself and eliminating his rivals. In this scenario, it is not at all certain that Netanyahu will be able to preserve the right-wing-ultra-Orthodox bloc that has been so loyal to him. As Shas Party chair and Interior Minister Aryeh Deri had acted as a guarantor to the Blue and White Party regarding Netanyahu’s intentions, Netanyahu’s latest move is an enormous gamble.