In Israel, Arabs feel sidelined in struggle against coronavirus

The Arab community has been disappointed with Israeli government communications about the coronavirus. 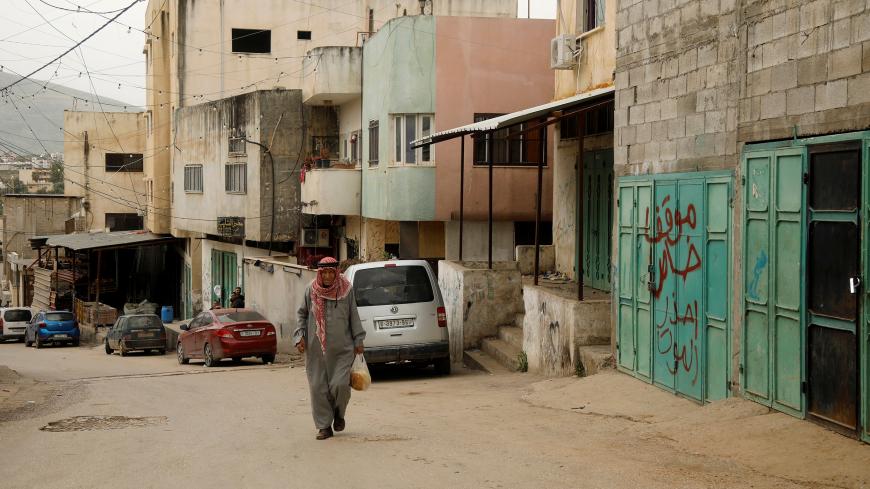 A Palestinian man walks in al-Fari'ah refugee camp amid concerns about the spread of the coronavirus in the Israeli-occupied West Bank, March 31, 2020. - REUTERS/Raneen Sawafta

In the decades since the founding of Israel, Arab citizens never really felt that they were part of the country or its struggles (civil or non-civil). Obviously, there are many reasons for this. Yet even when talking about the 2006 Second Lebanon War, in which 19 Arab civilians were killed (out of a total 44 civilians killed in the war), there is an overwhelming feeling that Arab casualties don’t count. Indeed, none of that changed over the last few weeks, with the spread of the coronavirus in Israel. Ever since the early days of this crisis, many officials, from the prime minister himself to the mostly lowly bureaucrat, have avoided addressing the Arab community in Israel directly.

Even with Arab doctors, nurses and hospital staff serving at the front lines in the battle against COVID-19, the overall feeling is that the Arab community is left out of the game, or rather, the struggle. The most flagrant example of this is the way that up until just a few weeks ago, the Information Center at the Ministry of Health barely communicated with the Arab population. Little was published in Arabic. At the same time, the majority of coronavirus tests were given to the Jewish public. This led to some very vocal complaints, verging on an uproar, among the Arab population. After all, most Arab citizens wanted to follow the instructions in order to protect themselves from the virus. The problem was that they were never told how. It was as if they simply didn’t count.

“We investigated the situation and came to the conclusion that there wasn’t enough information, nor were there enough tests for the Arab population. For example, we discovered that there was no Arabic-language option at the Magen David Adom call center [for health emergencies], and that the waiting time was longer than usual. That is why we launched an intense information campaign in traditional and social media, and we added Arabic-speaking staff to the Magen David Adom call center,” Dr. Zahi Said, a Health Ministry spokesman to the Arab population, told Al-Monitor. “The biggest change, however, came from the health insurance providers. This was the result of a decision to provide family physicians with the option of deciding on their own whether a coronavirus test was necessary and to provide these tests at their clinics, instead of referring patients to Magen David Adom. That helped a lot, because in the Arab society people tend to prefer the intimate relationship they have with their family physicians."

The doctor also said, ''It is important to note that the level of compliance in Arab society with Health Ministry instructions is encouraging. Evidence of this can be seen in the current numbers. As of April 8, there were about 250 cases of coronavirus among the Arab population, after some 10,000 tests were given [about 2.5%]. Furthermore, there are no cases in living facilities for the elderly in the Arab public. This contrasts sharply with the situation in the Jewish public.”

Said added, “It was important for us to speak to the Arab public in a language that it understands, especially given the diverse cultures and communities within Arab society. We put an emphasis on the factor of shame, telling people that they have no reason to be ashamed of contracting the disease. The fact that it affects 2.5% of people tested proves that we have succeeded in this. The fact that the number is so low, given the number of total tests, proves that our hard work has some positive results.”

Compliance with the Health Ministry’s directives is especially visible in the various houses of worship in the Arab public. Mosques, churches, and khalwats (Druze houses of worship) stand empty. In the age of the coronavirus, most people have abandoned their holy spaces, preferring instead to pray at home, like most of the world. The best example of this is the Kaaba, Islam’s holiest site, in the city of Mecca, Saudi Arabia. Usually a site of pilgrimage, the site is now empty.

Sheikh Samir Assi of Acre told Al-Monitor, “The Prophet Muhammad spoke about dealing with plagues when he said, ‘If you hear of an outbreak of plague in a land, do not enter it; but if the plague breaks out in a place while you are in it, do not leave that place.’ That is, effectively, the quarantine that people speak about today.” Assi also said, “As the former imam of the El-Jazzar Mosque in Acre, I called for the various houses of worship in the city to be closed once the virus started to spread across the country, in order to protect people’s health. On Monday [April 6], we held a joint prayer service in Haifa. Leaders of Israel’s four major religions [a rabbi, a priest, an imam and a Druze spiritual leader] participated in prayers for public health and well-being.” A similar service took place March 26 in Jerusalem, with Israel’s religious leaders coming together in prayer on behalf of those infected by the coronavirus.

The Rev. William Abu Shqara of Al-Saida Catholic Church in the town of Rameh told Al-Monitor, “At first, we prayed in groups of no more than 100 people, in accordance with instructions we received from the Health Ministry. Today, however, the churches are empty. Instead, prayers are held live over social media. In addition to that, every village has a priest, who visits his congregants in order to maintain the connection between believers and the church.”

As for the Druze community, Nayif Hino, deputy general manager of the Population and Immigration Authority, told Al-Monitor, “At the very start of the crisis, the spiritual leader of the Druze community, Sheikh Mowafaq Tarif, released a statement banning people from congregating for prayers in the khalwats, as well as at mass events such as weddings, funerals, etc., out of fear that it could cause the spread of the virus. It is worth noting that most members of the Druze community make sure to follow the Health Ministry’s instructions. It’s heartwarming. Even the streets are empty. Most people only go out for vital needs, such as purchasing food or obtaining medical care.”

Nevertheless, there are still fears of a very high incidence of the virus in Israeli Arab society. The reason for this is the lifestyle and high population density in Arab towns and villages. Many families live right next to one another, and many of them have elderly family members at home. In addition to this, the culture and lifestyle of the Arab community often revolves around social gatherings, with people meeting for coffee or to smoke a hookah.

There is, of course, fear of infection at religious ceremonies and holidays, especially with the Christian celebration of Easter, and Muslim Ramadan right around the corner. Western churches celebrated Easter on April 12, a week before the Eastern Orthodox Christians do; Ramadan begins April 23. In addition to that, weddings are also a ticking time bomb, with a serious threat of mass infection. As a result, there has been a widespread cancellation of social events and weddings by the Arab public. “All the events scheduled for March and April were canceled. There is nothing in my diary. People aren’t taking a chance. They’ve even asked to cancel events scheduled for May,” said singer Elias Glyanos, one of the most popular singers in Israeli Arab society. He told Al-Monitor, “Everyone assumes that this will take time. Besides, no one knows what the guidelines will be in the future. Who knows what will happen later on, when things get a bit better? There is a real concern that even when restrictions are eased in general, events like weddings would be limited to no more than 100 guests, and so people will stop hiring singers and bands. And with the economic crisis, they would want to keep their expenses low. There is no doubt that the wedding industry and all the associated businesses —– singers, photographers, event halls, etc. — suffered a devastating economic blow because of the coronavirus. I assume that unlike previous years, more people will be getting married in winter this year.”

Haytham Jeshy, a well-known singer from Haifa, said, “Quite a few events scheduled for March and April have been canceled. Some couples canceled their wedding celebration altogether, preferring a quiet and intimate ceremony without any guests, to postponing it to an unknown date. Other have postponed their wedding to the end of the year, in the winter season, or even to 2021, because they don’t want to take any chances.”