Iraqi authorities are worried the Islamic State will rear its head again now that the US-led coalition's anti-terror efforts have been put on hold, in part due to the coronavirus pandemic. 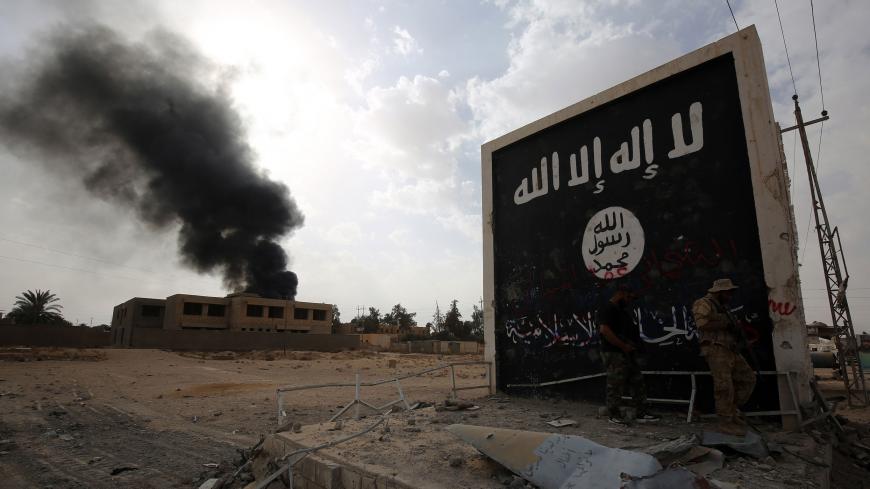 A wall bearing the Islamic State group flag is seen at the entrance to Qaim, Iraq, Nov. 3, 2017. - AHMAD AL-RUBAYE/AFP via Getty Images

BAGHDAD — The Islamic State (IS) is seeking to take advantage of Iraq's preoccupation with the coronavirus pandemic and the global coalition's suspension there of military operations against IS.

Accordingly, Iraqi forces have launched a preemptive operation to cut off IS supply routes and weaken its combat capabilities.

“Despite the suspension of the global coalition’s operations, Iraqi forces are conducting operations to hunt down the terrorist organization on the border with Syria," Iraq Defense Ministry spokesperson Yahya Rasoul told Al-Monitor. "IS has incurred huge losses in recent days as it tried to exploit the coronavirus crisis to expand its terrorist operations.”

The global coalition announced in March that it stopped its combat, logistical and training operations in Iraq. The French Defense Ministry said its soldiers there departed according to agreements with the Iraqi government. Meanwhile, Washington withdrew US personnel from some military bases, most notably the Qayyarah air base in northern Iraq, and handed the bases over to the Iraqi side.

The coalition's withdrawal was described as temporary and “tactical” amid reports that training of Iraqi forces to target IS remnants could resume once the pandemic is under control. However, some Iraqi parties have warned that in the meantime, IS might once again take control of large parts of the country's northwest.

The biggest threat comes from the areas of Jazira and Badia, which are adjacent to the Iraqi-Syrian border — especially considering that Iraq's Popular Mobilization Units (PMU) monitored armed IS groups entering Iraq from Syria. The groups had escaped March 30 from a prison in Hasakah. Add to this the escalating activity of IS cells in the Hamrin Mountains of Diyala province, as well as in southwest Salahudin.

Rasoul acknowledged that the absence of the coalition's technological support has affected Iraqi forces, but said it won't lead to a major shift in Baghdad's pursuit of IS.

“The real battle is an information battle, and the intelligence effort in Iraq has evolved a lot. IS is unable to cause great damage in the country like it did before,” he added.

Asked about Kurdish concerns over IS movements, Rasoul pointed out that IS exploits "void areas" between the places controlled by Iraqi forces and those controlled by Kurdish forces to infiltrate and carry out some attacks. But, he said, “There is coordination between the two sides to avoid this imbalance.”

Meanwhile, some authorities in Iraqi Kurdistan believe there could be a repeat of the 2014 scenario that led IS to dominate large areas of the country.

Jabar Yaro, secretary-general of the Ministry of Peshmerga Affairs in the Iraqi Kurdistan government, told the Russian news agency Sputnik on April 1, “The US withdrawal under such circumstances will affect the security conditions and the combat and defense ability of the federal and Kurdistan region forces and will lead IS to grow again in the region.” There have been numerous clashes reported, the most recent being an April 7 attack in which two peshmerga members were killed by IS sniper fire in Kolajo in the Garmiyan region, according to a Rudaw reporter in the area.

Sinjar Mayor Mahma Khalil said IS is likely to take control of Mount Sinjar and the surrounding area “if the security forces fail to preemptively strike the organization, especially considering that the border between Iraq and Syria is not controlled around there.”

He said, "The security conditions in Sinjar and its outskirts are fragile due to the presence of [armed groups], an uncontrolled spread of arms and the failure of the security forces to play their role in maintaining security. These factors lead IS to exploit the situation and reorganize its ranks.”

The prospects for a strong IS return are linked to its growing ability to smuggle more of its detainees from Iraq and Syria. Despite tightened security measures in Iraqi prisons, some courts are deciding to evacuate inmates accused of terrorism for fear of a coronavirus outbreak in prisons. There are calls for the release of more prisoners, but Iraqi authorities have yet to announce a plan to monitor and track the released individuals.

Kate’ al-Rikabi, a member of the parliamentary Security and Defense Committee, told Al-Monitor that reports about the power of IS and the possibility of its members escaping from prisons in Iraq come from the “media war” that Washington has waged to achieve specific political goals after its forces withdrew from some military bases. Chief among these goals, he said, is showing the importance of US forces remaining in Iraq.

"The withdrawal of some international coalition forces was a response to the Iraqi parliament's decision in January to end the presence of foreign forces, but coincided with the spread of the coronavirus pandemic, which accelerated the withdrawal process," Rikabi said.

“The Iraqi forces and the Popular Mobilization Units are capable of providing security after the experience they gained during the past years, and IS will not occupy areas of the country,” he added.

However, he did acknowledge that there have been changes in some mountainous areas, such as Sinjar, due to the absence of military air cover provided by the global coalition.

At the beginning of this year, the Iraqi parliament passed a resolution calling on the government to expel foreign troops from Iraq in protest against the US killing, on Iraqi soil, of Iranian Quds Force commander Qasem Soleimani and PMU deputy head Abu Mahdi al-Muhandis.

The decision created a wide political division, as Kurdish and Sunni parties emphasized the country's need for US forces to combat terrorism.

In this context, the partial withdrawal of these forces and the suspension of the global coalition operations due to the coronavirus crisis may reveal the extent to which Iraq is capable of facing its security challenges without seeking foreign support.