Despite a curfew and other restrictions imposed by the Iraqi government to limit the spread of the novel coronavirus, Iraq’s major protest squares remain packed with demonstrators. 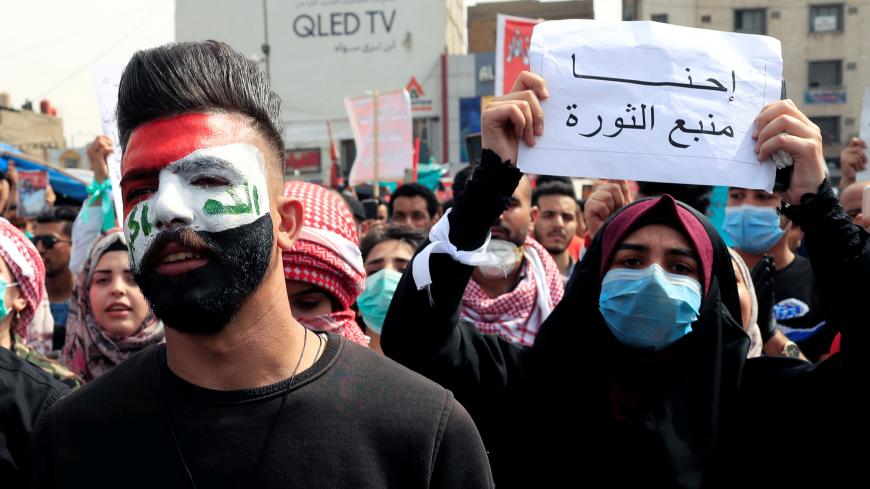 A woman wearing a face mask against the novel coronavirus outbreak holds a sign reading "We are the source of the revolution" as she attends a protest in Baghdad, Iraq, March 8, 2020. - REUTERS/Thaier Al-Sudani

Anti-government protests that began in October and raged through Iraq for months were officially suspended in late March as part of efforts against the novel coronavirus, or COVID-19, pandemic. Major squares, however, remain occupied. Some protesters say they have to stay amid continued assassinations of activists.

Umm Abbass, a well-known female activist in Nasiriyah, was killed on April 5 when militias allegedly stormed her home at dawn.

Security forces have found it difficult to make much of the population fully comply with orders to close all non-essential businesses. Flights from Iran seem to have continued despite the ban and religious processions have gone ahead despite risks of contagion.

It is unclear whether force will be employed to clear the squares at some point under the justification that they pose a public health risk.

On April 2, clashes reportedly broke out in Sadr City when security forces attempted to make the local working-class population abide by the government-imposed curfew.

Though the regulations are meant to prevent the spread of COVID-19, the lower classes in many countries restricting movement have found it difficult if not impossible to comply with them.

As for those still in Tahrir Square, “The virus will not matter to the protesters until their demands are met,” activist Nizar told Al-Monitor during a Whatsapp conversation on April 1. He sent a video of himself disinfecting the square, as the activists have been doing since mid-March.

Iraq confirmed its first case of COVID-19 in late February after the protests had already lost much of their initial momentum. Tension between the United States and Iran as well as other power struggles reduced participation significantly in the prior two months.

When Al-Monitor visited the square in the early afternoon of Feb. 26, the iconic high-rise known as the “Turkish restaurant,” which had been occupied by protestors for months, was empty and men stood guard nearby, watching everyone suspiciously. There were a few people in the tents and a loudspeaker blaring a recording of an Islamic greeting followed by the words by Muqtada Sadr about Iraqis of all sects and religion being Iraqis first and foremost and ending with “We will not let the corrupt politicians divide us.”

Al-Monitor had first met Nizar that afternoon in late February near Khilani Square, when protesters were trying to regain the square that they had lost in previous weeks. Many were throwing rocks at the security forces, lighting fires and yelling angrily. Three young men had died there the previous day, allegedly shot by security forces.

For months the protesters had held three major bridges and the squares near them, only to have their protest area reduced to Tahrir Square and its surroundings.

The tunnel under Tahrir Square, embellished with revolutionary graffiti, has been frequently featured by the international press since the protests started. For months, the street linking the two squares was filled with slogan-chanting marchers waving the Iraqi flag and other banners.

Al-Monitor had been warned by one Sadr supporter in January, however, not to go past a certain point on the street at night, as “those are a different type of people down there” closer to Khilani Square, near Sinak Bridge leading to the Iranian Embassy on the other side of the river.

In February, Nizar had noted that he thought the protesters should not be trying to regain Khilani Square, and especially not through violent means. He said he was there to be “a good influence” on them and try to convince them to go back.

During the April 1 Whatsapp conversation, Nizar denied that there had been any clashes in the area or that protesters had been attacked in recent weeks.

Other sources claim that security forces and others had attacked them in recent days. Many protesters and activists are hesitant to speak after a rash of kidnappings and killings in previous months.

In Nasiriya, a city known for decades as a revolutionary incubator and where dozens were killed in a brutal crackdown on a single day in November, protesters remain in the now-iconic Habboubi Square.

Clashes reportedly broke out between security forces and protesters in Nasiriyah April 3.

Ali, an activist and education ministry official Al-Monitor met during a previous reporting trip to the city in November, said in a Whatsapp conversation on April 1 that “about 200” protesters remain in the area but protesting had been suspended in order to “protect public health,” the safeguarding of which was one of the reasons for the protests in the first place.

The widespread corruption protesters have railed against has long been seen as detrimental to vital health care and services for the country’s citizens.

This sentiment was acutely felt and frequently expressed to Al-Monitor during visits to homes in impoverished areas such as Sadr City, where this reporter met with family members of young men killed by security forces or others in the first protests in October. In those homes, elections were seldom mentioned but demands for access to proper health care were constant.

In Basra, violent protests were sparked last year over a serious crisis created by contaminated water that had hospitalized thousands of residents.

Now, in Nasiriya’s Habboubi Square, Ali said, “We have formed teams to clean the tents and the square constantly,” adding that the teams are provided masks and gloves.

During Al-Monitor's November trip prior to the discovery of the COVID-19 virus, those tasked with cleaning had already been wearing masks and volunteers had been regularly cleaning the streets and tents.

Ali claimed that in late January, “militias linked to Kataib Hezbollah and Asaib Ahl al-Haq,” which have recently been disseminating videos of their supporters spraying disinfectant on Baghdad's streets, “burned our tents, killed six protesters and wounded many others.”

Engaging key tribal leaders in negotiations “with the militias,” he said, has lowered the threats they posed for the moment.

“But I still can’t sleep at home,” he claimed, saying he hadn’t been able to do so for months due to his initial high profile within the city’s protests and the risks of being kidnapped or killed even now.