Syria has requested assisted from Moscow to fight the coronavirus outbreak, as Russia implements a campaign to cultivate its image as a "caring power," approaching Middle East leaders to work together against the spread of the virus. 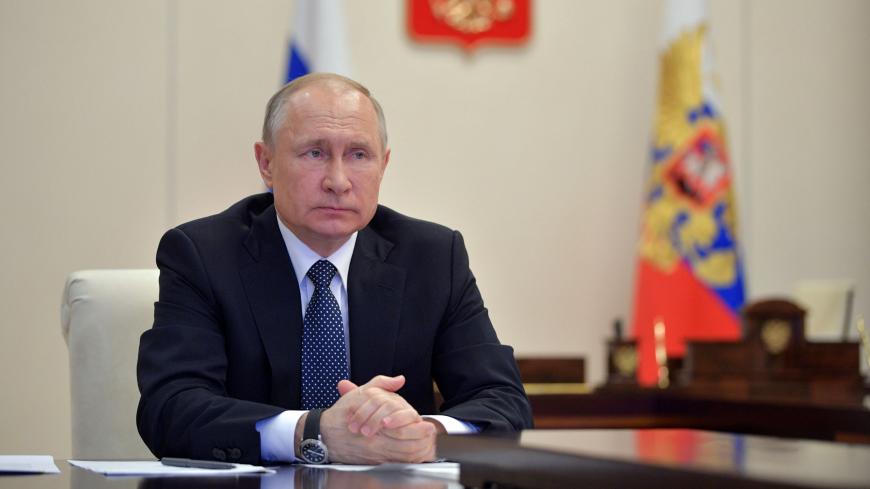 Russian President Vladimir Putin chairs a meeting on measures to stop the spread of the coronavirus disease at Novo-Ogaryovo, the state residence outside Moscow, April 7, 2020. - Sputnik/Alexei Druzhinin/Kremlin via REUTERS

Syria has made an official request for Russian assistance to combat the novel coronavirus outbreak. On April 8, Syria’s ambassador to Moscow, Riyad Haddad, told Russian reporters that he had approached the Russian Health Ministry to request aid to clamp down on the spread of COVID-19 in his country.

According to Haddad, Damascus has asked Moscow for testing kits and detection equipment, personal protection gear, and medical devices.

Why it matters: On April 7, Syria's government-run news agency, SANA, reported Health Ministry claims of a total of 19 coronavirus cases in the country. Among those infected, three people had recovered and two had died. Unofficial reports point to potentially much higher figures.

The spread of the virus in Syria has been on Moscow’s radar for more than a month. On March 24, Al-Monitor reported that Russia providing assistance to Syria to deal with the pandemic had been on the agenda of a meeting that day in Damascus between Russian Defense Minister Sergei Shoigu and Syrian President Bashar al-Assad.

On March 26, Russia, China, Iran, Syria, Venezuela, Nicaragua and North Korea appealed to UN Secretary-General Antonio Guterres to facilitate putting the brakes on sanctions hampering the fight against COVID-19. The effort has not produced the desired result.

New opportunities? Over the last few days, Russian officials, including President Vladimir Putin, have discussed the COVID-19 pandemic with a number of Middle Eastern leaders. On April 1, Putin spoke with Turkish President Recep Tayyip Erdogan about joint activities by their countries to combat the virus. On April 6, Israeli Prime Minister Benjamin Netanyahu called the Russian president, and the two “expressed a mutual stance in favor of enhancing coordination in countering the spread of the coronavirus infection,” a Kremlin press release noted. On April 7, Deputy Foreign Minister Mikhail Bogdanov spoke by phone with Ismail Haniyeh, political bureau chief of Hamas. The conversation reportedly focused on potential efforts to counter the worsening economic and humanitarian crises in the Palestinians territories.

Earlier, on Feb. 29, Iranian Prime Minister Hassan Rouhani had called Putin to get Russian reassurances to “render help in curbing the spread of the infection.” On March 12, Russia sent Iran testing systems able to identify the coronavirus relatively quickly, and on March 17 Deputy Foreign Minister Sergey Ryabkov said that Moscow had sent “additional humanitarian aid” to Iran, but he did not elaborate.

Moscow's engagement appears to be aimed at strengthening Russia's standing in the region by providing humanitarian assistance and cultivating the image of a “caring power.”

What’s next? Russia has received additional requests from a number of friendly countries that like Syria want help dealing with the coronavirus. Armenia, Kazakhstan and Serbia are among the most recent to reach out. Over the last 48 hours, the Russian military deployed chemical, biological, radiological and nuclear defense units to Belgrade and a number of other Serbian cities to help with decontamination and disinfection efforts. In Syria, this same response can be expected, but in addition, Moscow might as well include some medications that the Russian Health Ministry deems effective in suppressing the virus.

The long-shot effort to loosen sanctions against Russia, Syria, Iran and other countries is likely to remain unsuccessful.

Know more: Check out Khaled al-Khateb’s article in Al-Monitor on how Syrian students are turning to e-learning amid the COVID-19 pandemic and Kadri Gursel’s observations on how the Erdogan government has prioritized the economy over containing the coronavirus.