Egyptian President Abdel Fattah al-Sisi has done much to secure women's support, but angry mothers may be a major crack in the relationship. 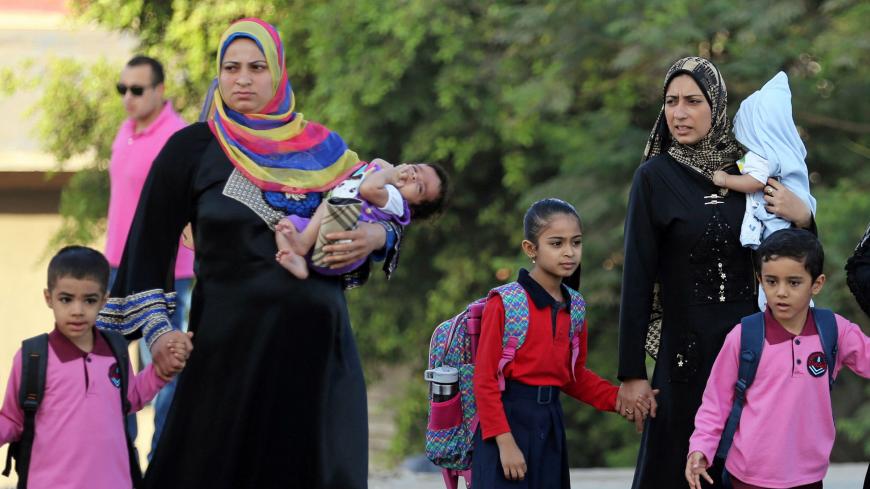 Students walk with their families to school on the first day of their new school year in Giza, south of Cairo, Egypt, Sept. 25, 2016. - REUTERS/Mohamed Abd El Ghany

CAIRO — Expressing her feelings about the detention of Khaled Safwat — an activist who founded the online platform Egyptian Mothers’ Revolution Against the School Curriculum, which criticizes Egypt’s education system — Lola Ismail wrote on Facebook, "I am optimistic and pray to God to bring you back home safe and sound.”

Ismail is a member of this group, considered one of the largest mothers' groups on Facebook in Egypt. The Facebook group was closed down in March after its founder was accused of “spreading false information” about the coronavirus pandemic in schools.

Safwat’s lawyer, Amr Abdel Salam, told Al-Monitor that Safwat was charged with spreading false news on the outbreak of the coronavirus among students.

Egypt has had a number of mothers' groups on Facebook and WhatsApp since the mid-2010s. These mostly include mothers of students in international and private schools. They discuss curricula and teachers’ methods, exchange experiences on the schools and find ways to help children study. Over the last two years, however, they have been very vocal in protesting some changes in the education system, including Minister of Education Tarek Shawki’s plans for the 2018/2019 academic year. What particularly drew the ire of the mothers then was the decision to leave the teaching of English to later years instead of in the first years of primary schools. Mothers argued that early introduction to a foreign language was precisely why they had chosen international and private schools for their children.

Relations have become further strained between the Ministry of Education and the mothers' groups with the online education system put in place because of the pandemic. Mothers' groups thought the minister’s decision to close schools on March 15 was made too late and put their children at risk.

The ministry’s decision that individual research projects would replace exams also created vocal criticism, as the mothers’ groups said the research projects assigned are too complicated for primary school students.

Their complaints only angered Shawki. “These groups exist only to stir controversy. Those who do not wish to educate their kids can save their questions,” Shawki said during a phone interview on the Egyptian Channel One March 19, refusing even to reply to the mothers' comments.

Though many groups have been vocal, it was Safwat who was detained March 17. “The public prosecution decided to extend his detention several times based on security investigations on some of his posts on his personal account and on the Egyptian Mothers' Revolution Against the School Curriculum group. One of the posts in question was a March 1 video titled ‘No need to rush, [the coronavirus] is here,’ a jab at the minister for not suspending school earlier,” said lawyer Abdel Salam.

A security source who spoke on condition of anonymity told Al-Monitor that Safwat’s posts — including the aforementioned video, which he or his close associates later deleted — contained inaccurate information such as the alleged spread of the virus among students in schools and the escape from hospital quarantine of several infected persons. “A post also mentioned that 135 Egyptians were in contact with patient zero [for the virus outbreak in Egypt],” the source said.

Besides Safwat, four women who are administrators and members of other groups were also arrested on charges of promoting false rumors and exciting the public. Three of them were arrested March 11; their names and the charges against them were not made public. M.R., the founder of a group called Egyptian Mothers in Distress, was arrested March 14. Charged with spreading false rumors, her name was also not disclosed.

Al-Monitor contacted through Facebook T.F., who is a member of the Egyptian Mothers' Revolution Against the School Curriculum. She said there has been a systematic security and media campaign against the vocal mothers, particularly those who are members of mothers' groups.

“I think the campaign is orchestrated by some officials in the Education Ministry who are trying to get back at some women who are administrators and members of these groups because they oppose the new education system and call the ministry officials out on their mistakes,” T.F. told Al-Monitor.

T.F. said this conflict between the mothers and the ministry signaled a crack in the good relations between President Abdel Fattah al-Sisi and his government and Egyptian women.“The president’s policy to empower Egyptian women had gained him much popularity among them,” she added.

Several prominent anchormen, television talk shows hosts and presenters who are said to be close to the Egyptian state, such as Amr Adeeb, Wael al-Ibrashi and Rami Radwan, have scathingly criticized the mothers' groups as arrest campaigns have been carried out.

Shahira Fahmi, a member of the Egyptian Mothers' Revolution Against the School Curriculum, admitted to Al-Monitor that the groups were huge and diverse and some of the posts were uncontrollable. “These groups are a double-edged sword. They contain a great deal of objective criticism of the policies of the Education Ministry and important tips for mothers. But at the same time, some mothers use it to post unfounded rumors. But this is the case with so many groups on social media,” she said.

“The state must differentiate between the founders of these groups and members who don't promote rumors and false news, and those who do,” she added. "[The state should] take action against those who spread false rumors without closing the groups. These groups are, after all, channels for Egyptian women and mothers to express themselves, which is an action encouraged by President Sisi."