The facts on the ground achieved by the Russian-backed Syrian regime on the battlefield in northern Syria were imposed upon Turkish President Recep Tayyip Erdogan by Russian President Vladimir Putin in Moscow. 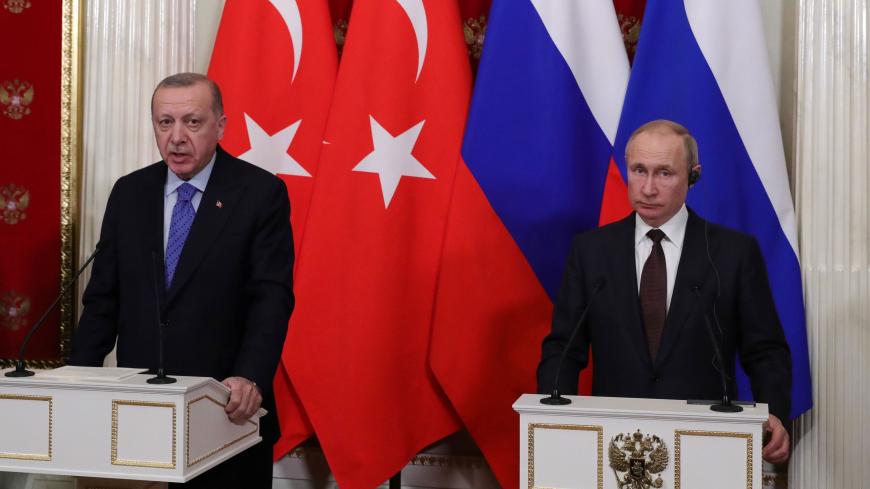 In Turkish, there is a saying which can roughly translate as “How you will end up on Thursday looks clear enough on Wednesday.”

When Turkish President Recep Tayyip Erdogan and his entourage of senior officials headed to Moscow on March 5, their expectation was to achieve a quick cease-fire in Syria’s rebel bastion of Idlib. They had expressed this desire the previous day. Many Turkey experts and pundits predicted that Erdogan’s meeting with Russian President Vladimir Putin would produce a temporary deal that could be face-saving for Erdogan without Syria having the military gains achieved on the Idlib battlefield reversed in favor of Turkey and its Syrian proxies.

Indeed, this is what happened in Moscow.

By agreeing to rush to Moscow instead of hosting Putin in Istanbul, and after making persistent requests for a meeting with Putin, Erdogan showed a weak hand. On his way to Moscow, he demonstrated that he needed Putin more than the Russian president needed him.

A respected Russian analyst, Dmitri Trenin, put it succinctly. “Putin is Russia’s czar, and Erdogan would like to be Turkey’s sultan, but he is not. He always feels insecure and faces serious opposition in his own country. Putin is basically at ease. He is at the top of his country and far more secure than Erdogan,” Trenin said.

The video footage of Erdogan’s reception at the Kremlin was full of unmistakable scenes of humiliation of Turkey’s president cum sultan by the czar of Russia. The body language of both leaders was revealing. As Erdogan sat next to Putin, the latter stood up and made a coarse gesture to call members of the Turkish delegation for a handshake. He acted as if he were doing them a favor or gracing them with his attention. The Turkish officials, including the foreign and defense ministers and the country’s spymaster, rushed clumsily toward Putin. They looked more like school kids called by the headmaster. Erdogan, seeing what was happening, stood and walked toward the opposite direction to shake hands with Sergey Lavrov and Sergei Shoigu, Russia’s foreign and defense ministers.

The most striking humiliation of the Turkish guests appeared in the choreography of the meeting. Footage showed the crowded Turkish delegation standing under an imposing statue of Catherine the Great, the Russian empress who annexed Crimea from Ottoman Turkey in 1783 and defeated the Ottomans several times in the Russo-Turkish wars in 1768-74 and 1787-1792. To add insult to injury, Erdogan was seated next to Putin under a bronze sculpture of Russian soldiers of the fateful Russian-Turkish War that ended in Ottoman Turkey’s defeat in 1878.

Al-Monitor’s Russia editor Maxim Suchkov was quick to observe the symbolism on Twitter, drawing attention to the statue of Catherine the Great and the sculpture of the Russian soldiers who defeated the Ottomans.

For anyone familiar with Putin’s penchant for symbolism in messaging his politics, the choreography of the Kremlin reception with Erdogan looked very diligently planned to humiliate and impose on him a Syria deal on Russia’s terms.

Thus came “Sochi 2.0,” as some like to interpret it, or, with its official title, the “additional protocol" to the Sochi memorandum of understanding of Sept. 17, 2018. The protocol's three points are as follows:

The protocol looks like a replacement for the earlier Sochi memorandum’s points 3, 5, 6 and 8. They were as follows:

Erdogan could not and did not implement what he had committed himself to in September 2018. Now, at the Kremlin in March 2020, he was imposed upon to accept the facts achieved on the Idlib battlefield by the Russia-backed Syrian regime offensive.

The “additional protocol” makes no mention at all of the M5 highway and the Turkish observation posts left behind the Syrian lines. It has become a non-issue for Russia and its Damascus ally.

As for the M4, which is still largely under the control of Turkey’s Syrian proxies, a security corridor will be established 6 kilometers deep to the north and south of it. This means Turkey has committed itself to remove its proxies from along the M4 highway so that it can be opened to transit traffic. This, in fact, was the eighth point of the 2018 Sochi deal, which has not been implemented thus far and has been the primary objective of the Syrian army’s Russian-backed offensive in Idlib.

Commenting on the Erdogan-Putin deal on the Al-Mayadeen channel, Vitaly Naumkin, a former Al-Monitor columnist and an influential figure on Russia’s Syria policy, said, “The Syrian army has achieved its objectives in Idlib by ending the militants’ control of the M4 and M5 highways.”

Al-Masdar al-Arabi, a Syrian media outlet considered as pro-government, made a similar assessment, saying, “This agreement ultimately gives the Syrian government what it has wanted for the entire Idlib operation: control of the M-4 and M-5 highways.”

And what is the face-saving element for Erdogan in the new deal on Idlib? The cease-fire he was so eager to get. That was enough for Erdogan to market the deal at home as if he got what he wanted to get in Moscow.

The government-controlled Turkish media paid almost no attention to the wording of the Moscow document, which calls for “ceasing all military actions along the line of contact.” This was a tacit acknowledgment by Turkey that there are new facts on the ground in Idlib that Turkey would not try to reverse. The “line of contact” is much different than the lines of Sochi 2018.

Erdogan had issued an ultimatum to the Syrian government forces to withdraw to the 2018 boundaries by the end of February, threatening that “no heads will remain on their shoulders” if they failed to comply. Still, Syrian forces continued to advance.

Contrary to the official propaganda, the Turkish military performance was far from brilliant. There is no doubt that Turkey’s drones and heavy artillery inflicted considerable damage to the Syrian military’s capacity. However, in the last 72 hours before the Moscow deal, Turkey lost 10 drones. The Russian daily Izvestia published a map of the Idlib battlefield under the subtitle “military adventure” and gave the figure as 13. According to the daily, eight of those drones were products of Bayraktar, a company owned by one of Erdogan’s sons-in-law (the other is the minister of finance in his government).

The battered Syrian government forces needed a break to heal their wounds — and have their arsenal replenished by Russia — but so did Turkey. The loss of drones and human casualties would have been impossible to sustain in the near future. So, a face-saving deal with Putin — albeit ostensibly temporary — is a salvation for Erdogan for a while. Hence, he and his loyalists are in a mood of celebration.

The New York Times quoted veteran Russian military analyst Pavel Felgenhauer as saying that Putin — a former KGB agent who served in East Germany during the Cold War — "has always been a professional recruiter, and his foreign policy boils down to recruiting leaders.” Applying his observation to Putin’s relationship with Erdogan, Felgenhauer said the Russian president “has been trying hard to recruit Erdogan and pull Turkey away from the West.”

Putin gambled once again with Erdogan and won again.