Turkish policymakers are split on whether a lockdown approach is the best way to protect Turkey from coronavirus, with some more fearful of the economic fallout than the potential deaths. 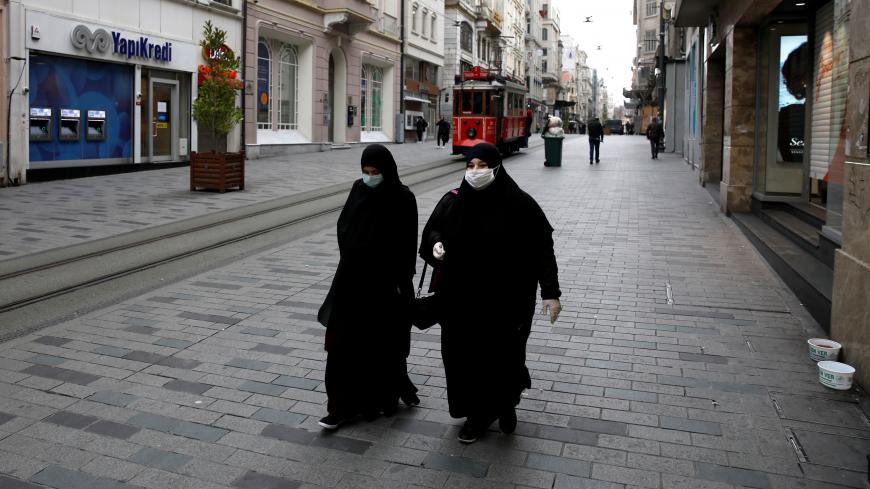 Turkish public health officials are pressing for a national lockdown while decision-makers at the helm of the economy fear the measure's possible impact on the country’s already ailing economy. Turkish President Recep Tayyip Erdogan tends to favor the latter, at least for now, well-informed sources told Al-Monitor.

Turkey's steep upward curve in new COVID-19 infections is leading many to ask whether Turkey will be the next Italy, where the death toll is more than 7,500 as of March 27. Many experts urge the government to order a full or regional lockdown as projections based on current statistics depict a grim prospect for the public health, economy and security. The death toll in Turkey can reach 250 people in 10 days and 99,000 over the course of the pandemic, if the current mortality rate remains the same, at 2.5%. The same projection suggests more than 4 million people in Turkey could be hospitalized.

The number of cases has rapidly increased after Turkey reported its first case March 11. The death toll has climbed to 59 in less than three weeks. More than 2,500 patients tested positive and some 8,000 patients are being monitored at hospitals, Erdogan announced March 25, a week after Turkey crossed the critical 100-patient mark.

Sources told Al-Monitor that Turkish policymakers are at odds over how to turn the tide, with some advocating a lockdown and others opposing such a measure.

Turkish Health Minister Fahrettin Koca and the ministry’s coronavirus scientific committee members are said to be in the first group. They advocate stricter measures to contain and mitigate the effects of the virus before it’s too late. The second group, meanwhile, led-by Treasury and Finance Minister Berat Albayrak, who is also Erdogan’s son-in-law, argues that Turkey’s ailing economy, which never fully recovered from the currency crisis in 2018, doesn’t have the luxury of going into a lockdown.

Despite the public sympathy Koca has elicited through his sincere and skillful demeanor since the beginning of the outbreak, Erdogan seems to be favoring the Albayrak-led approach, at least for now, defying demands for a limited or complete lockdown. The division is impeding the government’s ability to adopt a comprehensive crisis management strategy. The pandemic has now become a test for the government’s decision-making and crisis management skills along with the country’s already overwhelmed public health system.

Apparently, Erdogan believes that Turkey could overcome the crisis within a few months through strict restrictions on movements and activities instead of a lockdown. “We can get through this process with as little harm as possible and as soon as possible within two to three weeks by slowing down the spread rate of the virus,” Erdogan said March 25 in an address to the nation.

Experts worldwide, meanwhile, warn that it’s impossible to know how long it will take for the outbreak to subside.

Aside from its public health and economic aspects, the contagion also has a security dimension. Questions linger regarding the coronavirus' impact on the Turkish army and its troops deployed in Iraq and in Syria, where the first coronavirus case was reported March 22.

Although Turkish Defense Minister Hulusi Akar announced March 24 that no coronavirus cases have been documented in the army, and that necessary precautions, including tests and disinfection measures, are underway, these young men live in crowded wards and engage in athletic activities during their service, which can last six to 12 months.

Yet most of the soldiers dispatched to cross-border operations are contractors, who are paid for their army service. According to the Defense Ministry, there are no cases of COVID-19 among the Turkish troops in Syria or Iraq. The ministry is reportedly administering meticulous health checks on soldiers before dispatching them to foreign countries, and soldiers suffering from fever or cold are disqualified from duty.

The health of the Turkish troops in Syria’s Idlib province is particularly critical, given the limited access to medical treatment and challenging evacuation scenarios in the region. The Turkish military outposts are too crowded to implement social distancing. Furthermore, they are in constant contact with Syrian National Army fighters and civilians in their deployment areas.

Will Turkish troops take to the streets in Turkey? This prospect is unlikely, at least in the short run, the sources told Al-Monitor. They added that the Turkish police and military police, under the control of the Interior Ministry, would be sufficient to oversee the current restrictions.

Turkey has already implemented broad restrictions on movement and activities, including banning people over the age of 65 and those with chronic illnesses from leaving their homes; canceling all public gatherings and sports events; and limiting the use of public transportation and the number of customers permitted inside grocery stores. Schools will also remain closed until the end of April. The extent of the restrictions is expected to be extended.

Yet security forces and private security guards face new challenges amid the restrictions. For example, Turkey’s social media is flooded with videos that depict elders defying the ban on leaving their homes and facing harassment, prompting the police and local authorities to take further measures to prevent harm.

In a separate incident, a man stabbed two security guards at an Istanbul hospital when he was denied entry to his infected mother’s room. One of the guards remains in intensive care.

Turkish authorities may even cut off access to social media to keep the public mood under control at some point, as they usually do when a crisis has the potential to turn into public upheaval. But such a measure can backfire this time, as the internet, and social media in particular, are becoming a basic need for people who self-isolating. Most recently, Turkish authorities banned access to social media after the Russia-backed Syrian forces killed more than 30 Turkish troops in Idlib Feb. 27.

The outbreak, for now, has upstaged foreign policy matters, allowing Erdogan to deflect attention away from Ankara's failures in Syria and Libya.

In efforts to alleviate the concerns of businesspeople amid fears of recession, Erdogan also announced an economic stimulus package worth 100 billion Turkish liras ($15.4 billion). Yet this measure will deliver little relief to Turkey’s ailing economy, experts say.

As public health becomes priority across the country, a perfect storm will loom over Turkey in the coming months. The gloomy economic outlook worldwide and possible external financial shocks could further exacerbate the country’s woes.

Turkey should brace for a tough summer and fall. Whether Erdogan will tighten his authoritarian grip over the country as a response to the pandemic is an open question, but one thing is clear: Erdogan can’t weather these hard times without taking drastic measures.