The Turkish-Russian deal on a cease-fire in Idlib was expected to ease economic jitters in Turkey, yet the country’s risk premium has hardly changed under the impact of the coronavirus crisis. 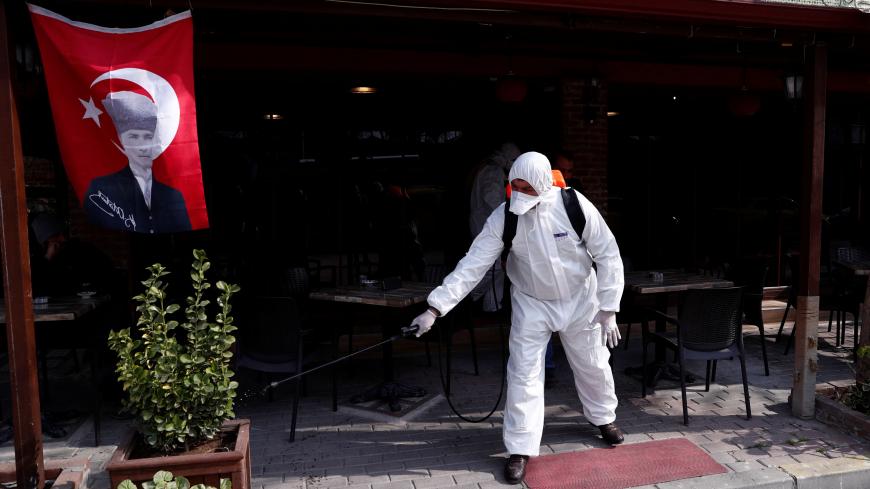 The global fallout from the coronavirus outbreak is turning up pressure on the struggling Turkish economy, which has long been stuck in a roller coaster of domestic and foreign tensions. On March 11, Ankara confirmed its first infection case, with the virus scare coming hot on the heels of war jitters from Turkey's military involvement in Syria.

The rapid spread of COVID-19 from China has badly rattled the global economy, which was already volatile and shaken by Washington’s trade moves against China. While the ultimate human and economic toll of the epidemic remains anyone’s guess, moves to minimize the fallout are spawning “derivative” risks such as the oil price war between Saudi Arabia and Russia.

Tensions with the Russian-Syrian alliance in Idlib were the leading factor in Turkey’s risk aggregate a few weeks ago, but the coronavirus outbreak is now climbing to the top, mirroring the trend across the world. Its impact on travel and other economic activities was already apparent before Turkey’s confirmation of its first patient, which came quite a while after the virus reached its neighbors, including Iran, the worst-hit country in the Middle East.

Turkey’s risk premium, reflected in credit default swaps, is a good indicator of how economic and political tensions have affected the country. As recently as Jan. 13, Treasury and Finance Minister Berat Albayrak, who is also President Recep Tayyip Erdogan’s son-in-law, was hailing the drop of the country’s risk premium to 267 basis points, its lowest level since May 2018. “We have achieved an improvement of some 320 basis points since the currency attack in August 2018,” Albayrak tweeted. “Our economic performance in 2019 boosted confidence in our country. We will take this much further in 2020,” he wrote.

In only several weeks, however, the risk premium climbed to more than 340 basis points amid a dramatic escalation in Turkey’s military intervention in Idlib, marked by the deaths of more than 30 soldiers in a single attack Feb. 27. Erdogan’s March 5 meeting with Russian President Vladimir Putin raised hope that a deal to defuse the crisis would pull the risk premium down.

Indeed, the summit in Moscow resulted in a cease-fire deal that has silenced the guns for now, yet the risk perception for Turkey has hardly changed. The country’s credit default swaps exceeded 390 basis points March 9 before climbing further to about 420 basis points the following day under the impact of the coronavirus epidemic, including both its worsening global fallout and Ankara’s tacit admission of its arrival to the country.

Finally, in the early hours of March 11, Health Minister Fahrettin Koca confirmed the first officially identified infection case in Turkey. “I’d like to give you some news that is regrettable but not frightening,” he said, announcing that a male patient with fever and cough had tested positive for COVID-19. The patient, whose general condition was good, contracted the virus in Europe, Koca added.

By the time he made the announcement, the World Health Organization had tallied more than 114,000 infection cases and over 4,000 deaths in 110 countries. The relatively long wait before Turkey identified its first infection case was widely seen as bizarre, with some even questioning Ankara’s transparency.

Under the impact of the epidemic, the global economy’s growth rate is expected to drop to 2.4% this year from 2.9% in 2019, according to a recent report by the Organization for Economic Cooperation and Development (OECD). Growth in the Group of 20 of leading developed and developing countries is expected to fall by 0.4 percentage points to 2.7%, while the rate is projected to drop to 0.8% in the euro zone and below 2% in the United States. The Chinese economy is expected to take the worst blow and grow only 4.9%, a decrease of 1.2 percentage points from last year.

For Turkey, the OECD projects an economic growth of 2.7%, a far cry from the 5% target that Ankara has set. Much to the chagrin of the ruling Justice and Development Party, a growth of 2.7% would be a rather mediocre performance, given the country’s rampant unemployment — 13.7% or 4.4 million jobless in 2019. Many had hoped for a stronger recovery in 2020 after the economy grew only 0.9% last year following a severe currency shock. The coronavirus crisis has already triggered tremors in the country’s civil aviation sector and the vital tourism industry. Consumption is bound to decrease in general as people choose to stay at home and shun crowded places.

Many observers doubt the effect of the US Federal Reserve’s emergency rate cuts in curbing the damage of the outbreak and the same goes for any similar moves the Turkish central bank could make. The impact of rate cuts would be even more questionable in a country where inflation appears to be ossifying in the region of 12%-13%, coupled with a resurging current account deficit.

Other precautions are already under way on a sectoral basis. The Banks Association of Turkey, for instance, has announced a set of measures that banks should implement, including the preparation of “disaster centers” and contingency plans on the substitution of critical personnel if they fall ill from the virus and for bank employees to work from home.