IMF option looms larger for Turkey amid row with US

Turkey’s economic woes keep growing, exacerbated by central bank inaction and simmering tensions with the United States, in what many see as an inevitable march to the IMF. 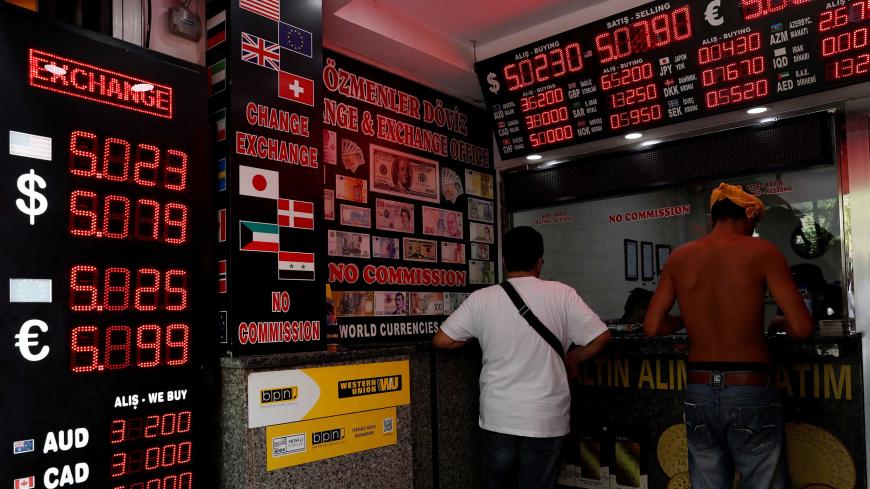 The embattled Turkish lira hit a new low late Aug. 1, breaking the psychological mark of 5 against the dollar as Washington slapped unprecedented sanctions on Ankara in a simmering row over a detained American pastor. The mounting bilateral tensions and their economic impact come atop alarming signs of how President Recep Tayyip Erdogan will handle the ailing economy under the one-man rule he has been building since his victory in the June elections. Though few in Ankara would admit it, the prospect of Turkey running for aid from the International Monetary Fund (IMF) is looming large.

The new Cabinet that Erdogan formed after the elections had to grapple with growing economic woes immediately after it took office. Among the Cabinet members, the president entrusted the biggest authority to his son-in-law, Berat Albayrak, by appointing him treasury and finance minister and attaching the central bank to his ministry. Though Erdogan had ostensibly delegated powers, he seemed to cast a long shadow on both Albayrak and the central bank when the latter convened July 24 to make a decision on interest rates and send the first major signal on how Erdogan’s new administration would run the economy.

The markets anticipated a hike of at least 100 basis points to prop up the Turkish lira and curb the menacing rise of hard-currency prices. Albayrak reinforced the anticipation, pledging ahead of the meeting to not fight with the markets and instead pursue “a win-win relationship” with them. But the meeting ended with a shocking decision to keep the policy rate unchanged, which markets perceived as a direct order by Erdogan, given his well-known aversion to high interest rates and unconventional economic views that have long perturbed investors.

The lira, which was gaining ground toward 4.6 against the dollar ahead of the meeting, nosedived anew. The greenback’s price ultimately broke the 5 lira psychological mark Aug. 1 as the United States imposed sanctions on two ministers over Ankara’s refusal to release pastor Andrew Brunson, who Washington said is “the victim of unfair and unjust detention by the government of Turkey.”

The Turkish economy has been stuck between mounting hard-currency prices and already high lending costs of nearly 25%. While both trends have a bruising effect on the economy, Erdogan seems bent on maintaining his opposition to hiking rates at the expense of further increases in hard-currency prices, which contribute to fanning inflation.

Hopes of reining in inflation have dimmed, with the rate standing at more than 15% in consumer prices and more than 24% in producer prices. The upward trend is likely to continue and reach 20% in consumer prices and at least 25% in producer prices at the year-end. The increased cost of imports — the result of the rise in hard-currency prices — is a major factor pushing up the inflation.

In its July 31 inflation report, the central bank revised its year-end inflation projection to 13.4%, an increase of 5 percentage points from 8.4% in April. The report said that the rate is expected to fall to 9% in 2019.

Many local and foreign observers doubt the credibility of those projections. While the inflation trend offers no prospect of easing, there is a growing conviction among observers that the one-man regime lacks the ability to take things under control.

Because of high inflation, other economic indicators have been deteriorating as well. While the climate of uncertainty is discouraging investments, inflation is eroding real incomes and curbing domestic consumption. As a result, the shrinking demand is bearing on economic growth, which has relied largely on the domestic market. The Turkish economy, which grew 7.4% in 2017, is expected to slow in the third quarter before beginning to contract.

The growing uncertainties are discouraging also the inflow of hot money from abroad, which Turkey desperately needs. Moreover, existing foreign investors have been fleeing the Turkish stock market, albeit slowly — a trend that contributes to sustaining the high prices of foreign exchange, especially the dollar. Accordingly, Turkey’s risk premium — reflected in credit default swaps (CDS) — is on the rise. Turkey’s CDS, which had stood at 166 basis points Feb. 1 and 199 basis points May 1, hit a record high of 334 basis points on the evening of Aug. 1 — up from 321 points in the morning.

The increasing risk premium means that Turkey will now face higher interest rates when it tries to borrow from foreign creditors. The country’s external financing needs for the next 12 months amount to $230 billion, including $180 billion to roll over external debts and $50 billion to cover its gaping current account deficit. Hence, the question of how the required funds will be secured and at what cost is crucial. The tensions with Washington came amid this already serious crunch, exacerbating the woes of Erdogan’s regime.

The row over Brunson had flared last week, as both President Donald Trump and Vice President Mike Pence threatened sanctions unless Ankara took “immediate action” to release the pastor, who is being held on what Washington sees as bogus charges of espionage and collaboration with terrorist groups.

The warnings had an immediate economic effect, pushing up Turkey’s risk premium, as pundits sought to predict the scope of the upcoming sanctions. Some suggested that Washington’s hardening stance would bear on the flow of foreign capital to Turkey and the support it might seek from the IMF, while others saw trouble looming over Halkbank, the Turkish public lender embroiled in a scheme to evade US sanctions against Iran. Ultimately, Washington announced sanctions on Interior Minister Suleyman Soylu and Justice Minister Abdulhamit Gul under the 2016 Magnitsky Act, which targets individuals and entities involved in human rights abuses. According to Bloomberg, this “could be just the start of what would look like a US assault on Turkey’s vulnerable economy,” including a potentially hefty fine on Halkbank.

The political quarrel between the two NATO allies is clearly harming the Turkish economy, with the sanctions having an immediate effect on the currency. Yet Ankara’s failure to hike interest rates on the lira to counter the rise of foreign exchange is leaving Turkish companies in limbo. Both indebted companies and the banking sector, which is struggling with bad loans, are under severe strain.

The banking system is already under the scrutiny of international credit rating agencies. In a July 30 report, Fitch Ratings warned that the multiple risks to Turkish banks that led to widespread rating downgrades in July continue to threaten their credit profiles. “Depreciation of the Turkish lira, higher interest rates and slowing economic growth pose significant risks to banks’ performance, asset quality, capitalization, funding and liquidity,” it said. “We expect sector performance to deteriorate in 2018, and most of the banks' ratings are still on Negative Outlook or Rating Watch Negative.” Earlier in July, Fitch downgraded its already “junk” rating on Turkey’s sovereign debt as well as the ratings of 24 Turkish banks.

The gloomy outlook painted by credit rating agencies makes the provision of external funds all the more difficult, pushing Ankara step by step to the IMF’s door.

The Justice and Development Party has long boasted of ending the era of IMF debts and austerity programs for Turkey, and Erdogan has even claimed that the IMF has sought to borrow from Turkey. At the current stage, however, the country’s economic conditions are increasingly dictating the IMF option — though the government will go to any lengths to avoid conceding to it.