The Jordanian authorities' effort to distribute bread to citizens brought more confusion and panic than aid. 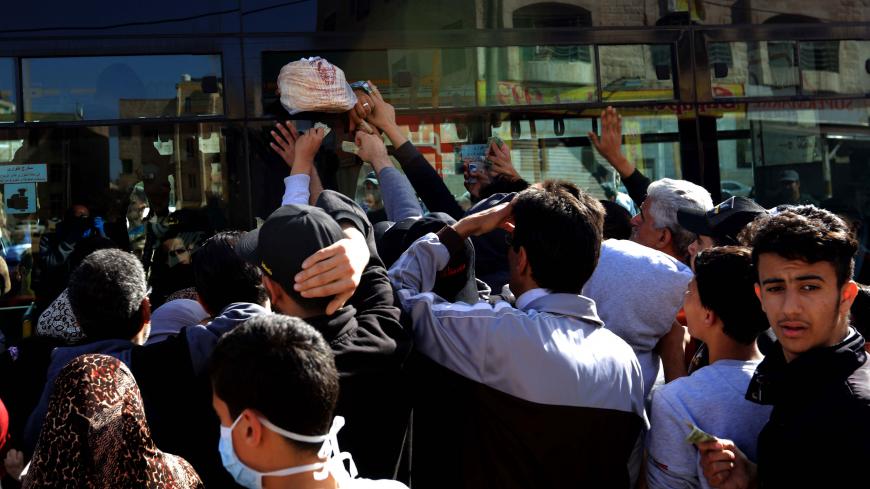 People crowd round to buy bread from a bus in Amman, Jordan, March 24, 2020. - Xinhua/Mohammad Abu Ghosh via Getty Images

Chaos reigned in Jordan March 24 as the authorities distributed bread to Jordanians amid a total lockdown and the closure of food stores in an effort to curb the spread of COVID-19. As of that day, there are 153 cases in Jordan.

The government pledged to distribute bread to citizens via municipal vehicles and public transportation buses. After the announcement, hundreds of citizens across the kingdom ran out to meet the buses, jostling each other despite police attempts to keep them apart.

The chaos prompted the government to reassess the distribution experience and step up calls to citizens to stay at home and wait for delivery. “Work is underway to solve the difficulties that have emerged on the first day of bread distribution to citizens," Local Administration Minister Walid al-Masri said in a March 24 press statement. "The distribution process is ongoing and there is enough stock for everyone, so there is no need for people to leave their houses, as everyone will have their share.”

Salah al-Lawzi, the director of the Land Transport Regulatory Authority, told Al-Monitor that an agreement has been reached with transportation companies, yellow taxis and ride-share vehicles to distribute bread.

On the same day, Minister of State for Media Affairs Amjad al-Adaileh promised to rectify errors in the distribution system. “There are no ideal solutions in such difficult circumstances," he said in a press conference. "Errors will be made and we will work to improve. Everyone, including citizens, should assume their responsibility in this regard.”

In the wake of the chaos, Prime Minister Omar al-Razzaz decided to allow small district shops to open starting March 25 and to permit large markets to provide delivery services as of March 26.

Meanwhile, social initiatives have surfaced to help the needy.

Activists in the Husn Palestinian Refugee Camp launched the Poor Pulse Initiative to support families in need of basic food items such as eggs, bread and water.

Social worker at the camp Ahmed Abu al-Haifa told Al-Monitor, “The food distributed to the poor and daily workers was donated by camp residents and volunteers were able to donate food to most of the affected families.”

The country's Teachers Syndicate launched the “Jordan Virtual School,” an online platform to support the government's plan to provide distance education for students.

“The student will find video classes on this platform,” a spokesperson told Al-Monitor, adding that the syndicate donated half a million dinars ($705,000) to the government to fund the delivery of basic supplies to citizens. "We are ready to form teams to serve citizens and provide them with their needs in full coordination with the General Security, Civil Defense and army authorities,” he added.

On a lighter note, Jordanians, like many other people around the world, are fighting boredom during the curfew by sharing curfew diaries online, showcasing singing and cooking talents and offering rounds of applause from balconies to the medical teams working around the clock.

To send a bit of fun to the house-bound, the Jordanian Civil Defense personnel distributed the Snakes and Ladders board game to some homes for families to play together.

But despite efforts to make the curfew bearable, some, like head of the Jozoor Center for Human Rights Fawzi Samhouri, think it should be more flexible. Samhouri told Al-Monitor, “We all support the measures that the government is taking to limit the spread of the virus, but it must allow one member of the family to go out to buy basic needs. Legally speaking, public health is the responsibility of the government. Imposing the comprehensive curfew is not [the only option], particularly from a humanitarian point of view. The government must learn from the experiences of other countries."

“The solution is to allow retail sector to work for four hours every day,” he added.

The Jordanian authorities have imposed a strict curfew based on a March 21 defense order that prohibited movement across the kingdom until further notice. The penalty for breaking it can be one year imprisonment and thousands of police and military forces have been deployed on the streets to stop movement between provinces.

According to the Public Security Directorate, 1,657 citizens had been arrested for breaking the curfew as of March 24.

A spokesman for the Public Security Directorate said that in cooperation with the Jordanian Armed Forces, two military facilities in the Khoo and Al-Hasa regions will be dedicated to people who are arrested for violating the curfew.

Jordanians have rarely known curfews. The kingdom imposed one in 1956 after the rebellion of a group of officers known as the “Free Officers Movement." The second time a curfew was imposed was after September 1970 fighting between the Jordanian army and Palestinian resistance organizations.