The global coronavirus outbreak and falling oil prices could spell a massive economic slowdown for oil-producing countries in the Middle East. 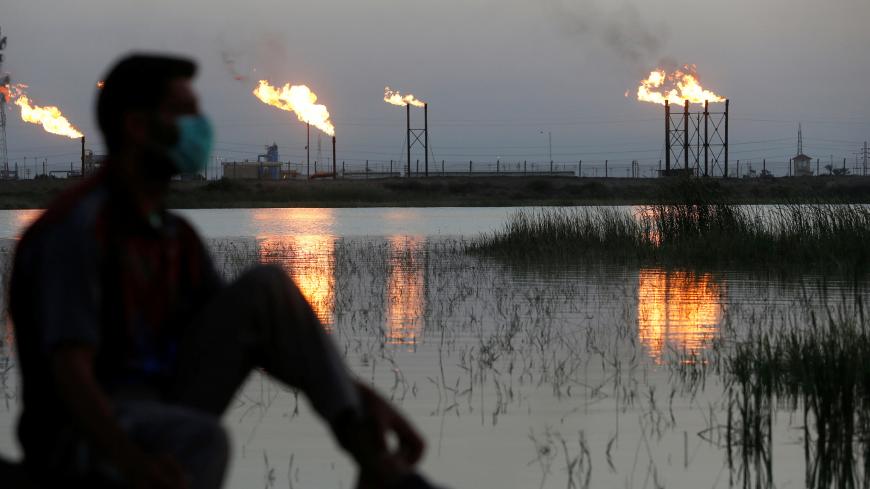 Flames emerge from flare stacks at the Nahr Bin Umar oil field, and a man is seen wearing a protective face mask following the outbreak of the coronavirus, north of Basra, Iraq, March 9, 2020. - REUTERS/Essam Al-Sudani

Amid the coronavirus panic and plunging oil prices, fears are mounting of an economic slowdown in the Middle East’s main oil-producing countries.

The price of Brent crude oil dropped nearly 30% Monday in its biggest one-day fall since the Gulf war in 1991. The tanking oil prices followed a breakdown in talks between Saudi Arabia, the world’s second largest oil producer, and Russia.

On Sunday, the kingdom announced a deep discount in its export prices in apparent retaliation for Moscow’s unwillingness to join the Organization of Petroleum Exporting Countries (OPEC) in a large production cut meant to offset the impact of the coronavirus outbreak.

The ensuing price collapse comes as the region is still reeling from the spread of the novel coronavirus, also known as Covid-19. More than 116,000 people have contracted the illness in over 80 countries, according to Johns Hopkins University. Of the more than 4,000 recorded deaths, the majority have occured in mainland China.

All the Gulf Arab states have recorded cases. On Monday, Saudi Arabia announced it was temporarily closing its borders to flights from more than a dozen countries, including the UAE, Kuwait and Bahrain.

In Iran, where the outbreak is among the deadliest outside of China, authorities say the virus has killed more than 290 people and infected over 8,000.

Amid the coronavirus fears, the region’s top oil producers have seen a decrease in oil consumption from China. The World Bank warns those countries will likely see a decline in income this year if the price drop persists.

“As the world struggles with the fear of recession, the Middle East and North Africa could be the hardest hit by what is arguably a perfect storm: The coronavirus spreads to the region and oil prices collapse,” the World Bank said in a recent briefing paper.

“It is likely that lower oil prices will directly hurt oil exporters, whose income will decline, and indirectly importers — which will see reduced foreign direct investments, remittances, and grants from the exporters,” it read.

On Tuesday, Iraq’s Oil Minister Thamir Ghadhban said in a statement that he was in contact with other OPEC+ members to discuss ways to prevent oil prices from dropping further.

"Flooding the world market with oil is not in the interest of the producing countries,” his spokesman added.

According to the International Energy Agency’s latest forecast, oil demand could drop in what would mark the first full-year decline since 2009. If the coronavirus is not contained, the Paris-based agency said global demand for oil could fall by as much as 730,000 barrels a day in 2020.

In another bleak assessment, the Organization for Economic Co-operation and Development (OECD) predicts global GDP growth could fall to just 1.5% in 2020 — half the rate projected before the viral outbreak.