From Beirut to Khartoum, women in the Middle East held demonstrations calling for the elimination of discriminatory laws and improvement of their situation. 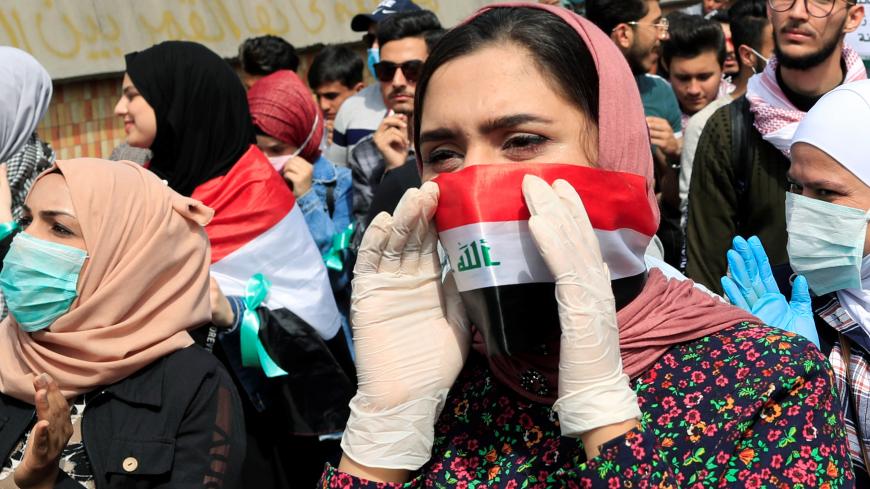 Despite global fears of the spread of the coronavirus, women around the world took to the streets March 8 to celebrate International Women’s Day. In the Middle East, from mask-clad Lebanese women calling for a feminist revolution on the streets of Beirut to protests by Sudanese women in front of the country’s Ministry of Justice, women have used the occasion to call for nondiscriminatory laws, greater representation in decision-making and strong measures to fight against domestic violence.

In Khartoum, Sudanese activists gathered in front of the Justice Ministry to voice their disappointment at the lack of progress on women’s issues, particularly after they have been at the forefront of the protests that toppled Omar al-Bashir last year.

“Nothing has been done to meet women’s demands [in Sudan],” Zeineb Badreddine, one of the activists, was quoted as saying by AFP. The activists’ demands include government measures to increase the age of marriage for girls to 18, get more women in the country’s ruling Sovereignty Council and abolish the system of guardianship that requires women to have a male guardian so they can travel abroad.

In Beirut, although the International Women’s Day march had been canceled due to precautions following the COVID-19 outbreak, a few hundred women — and men — walked through the streets of Beirut, calling for the fall of traditional patriarchal structures and improvement of personal status laws.

In Baghdad, Iraqi women marked the day at Tahrir Square with red and white roses and purple banners. Most of them wore masks.

In Istanbul, despite a ban imposed by the Governor’s Office, at least a thousand women gathered in Istiklal Square carrying banners demanding justice for victims of femicide and domestic violence. They were prevented by the police from marching down the main pedestrian street, so they marched through a parallel street instead.

Some 850 kilometers (530 miles) from Istanbul, female asylum seekers who were waiting at the buffer zone at the Turkish-Greek border to cross to Europe have staged a demonstration demanding the gate be opened on International Women’s Day.

The region’s politicians shared their own messages to pay lip service to women, such as pledging their commitment to women’s progress in Riyadh, hailing them as “makers of happiness” in Cairo and as “first teachers of humanity” in Ankara.

But deeds, rather than words, is what is needed to ensure the equality of women, according to Equality Now, a London-based group that lobbies governments to repeal laws that explicitly discriminate on the basis of sex.

Earlier in March, the rights group called on all governments to review their legislation to amend discriminatory laws such as guardianship of men over women, polygamy, early marriage and domestic violence — common problems seen in the family laws of the Middle East and beyond.

“I dream of a family law that gives equal place to women rather than one that reflects the patriarchal society,” Suad Abu-Dayyeh, the Middle East and North Africa expert of Equality Now, told Al-Monitor.

Abu-Dayyeh is one of the contributors to Equality Now’s report, “Words and Deeds: Holding governments accountable in the Beijing +25 review process.” This year’s report, the fifth one since they published the first report in 1999, focuses on family law, which Abu-Dayyeh said is one of the most difficult legal areas to change as it is based on religion, custom and tradition.

“Religious, cultural, and ethnic identities are vested in family law,” the report states, explaining why they chose to focus on family law this year. “These laws include marriage, divorce, custody and guardianship, property rights, as well as inheritance. … Attempts to reform family laws are often portrayed as threats to group identity and rights and used as justifications to resist demands for reform towards further equality.“

Abu-Dayyeh stressed that this is particularly true for the Middle East and North Africa. “The most discriminatory laws against women — from marriage to divorce, from the right to work to the custody of children — are embedded in family laws in the region. They define marriage as a power relationship, not a contract between equal partners,” she said.

The report gives specific examples of discriminatory laws that place women at a disadvantage, such as Article 8 of Algeria’s family law that allows polygamy for men. “We see that in many countries in the region, including Egypt, Jordan and Iraq,” said Abu-Dayyeh. “We also see laws that allow girls younger than 18 to get married under certain conditions or laws that force women to marry their abductors or rapists.”

Other examples of discriminatory laws in the report include the Iraqi Penal Code that states that a man who “punishes” his wife is “exercising a legal right,” or Tunisian and United Arab Emirates laws that allow sons to inherit twice as much as daughters.

Despite the gloomy picture overall, Abu-Dayyeh said that there has been progress in the region.

Saudi Arabia has lifted a ban on women driving as well as male guardianship, she pointed out. “Now women can get a passport without the consent of a guardian,” she added.

“Marry your abductor/rapist” law, a popular name for the penal code articles that pardons a rapist if he weds his victim, has also been repealed in Tunisia, Lebanon and Jordan.

In Palestine, the age of marriage used to be 15 for girls and 16 for boys, but an amendment approved by President Mahmoud Abbas in November 2019 put the age limit for both at 18, though a judge may decide to allow couples to get married earlier, which is a point of concern for women's groups.

According to a UNICEF report published in July 2018, there are 40 million child brides in the Middle East and North Africa. The same report states that one out of five women marry before the age of 18 and one in 25 before the age of 15.