Israel's High Court has held an emergency hearing on the government's use of cyber technologies to track carriers and suspected carriers of the novel coronavirus. 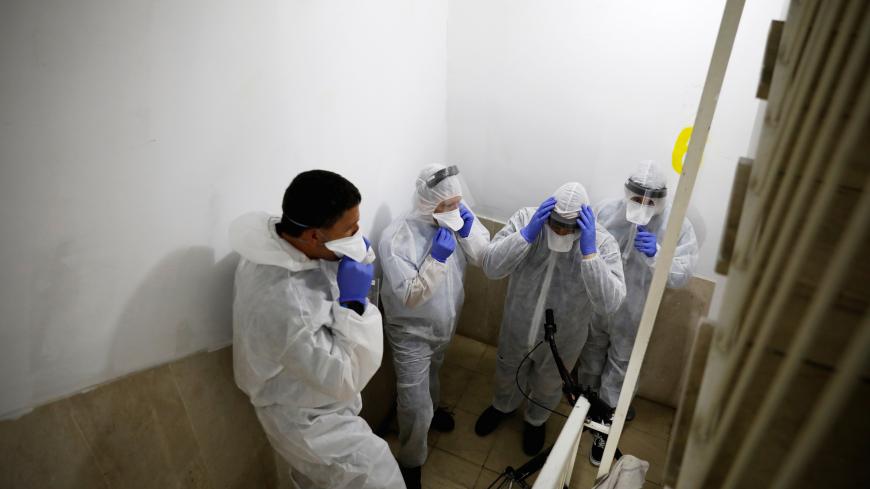 Israeli Health Ministry inspectors put on protective gear before they go up to the apartment of a person in self quarantine as a precaution against coronavirus spread in Hadera, Israel March 16, 2020. - REUTERS/Ronen Zvulun

Israel's High Court of Justice will decide whether to suspend the use of controversial cyber technology that would allow the government to track the movements of people infected with the novel coronavirus and those believed to be carrying it.

On March 16, the Cabinet of Prime Minister Benjamin Netanyahu bypassed Knesset approval and signed off on the security agency Shin Bet tracing the affected individuals cell phones. The technology had previously been used to monitor Palestinians suspected of involvement in terror activities.

Netanayhu defended the cyber monitoring as a necessary measure to stop the spread of the virus, while noting that it would “entail a certain degree of violation of privacy.” The government says the technology would allow it to inform unsuspecting Israelis that they had come into contact with an infected individual.

Haaretz reports that the High Court held an urgent hearing this morning on the tracking, which went into effect on March 17. The Arab Joint List, the Association for Civil Rights and Adalah—the Legal Center for Arab Minority Rights claim in petitions they filed that Israel’s use of counterterrorism technology for coronavirus tracking infringes on the civil liberties of citizens.

“The government cannot bypass the legislature and hide behind a general state of emergency to commit such extreme human rights violations,” Adalah asserted in a statement. “This crosses a red line no less troubling than the coronavirus epidemic itself.”

“The Joint List will not allow Benjamin Netanyahu to obliterate a basic civil right in the middle of the night,” he said in a statement.

Israel's Ministry of Health reported an additional 96 case of coronavirus infection since yesterday, bringing the total number to 529. There are 44 reported cases in the West Bank and none so far in Gaza.

Netanyahu said the government will begin conducting at least 3,000 coronavirus tests a day, and within the next two weeks, scale up to 10,000 per day.