Hamas does not want to distance Egypt as the chief mediator between the group and Israel, but it would like to add Russia to the equation. 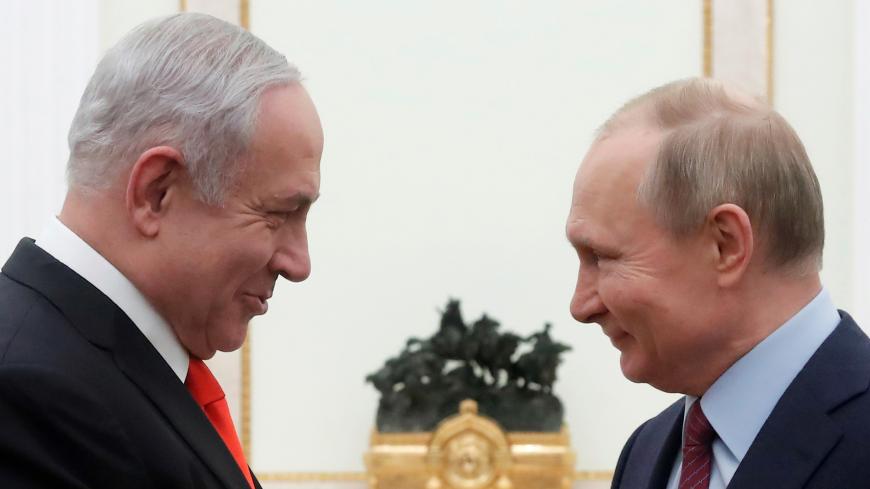 While Israel was busy with its fateful, charged election campaign, the heads of Hamas went to the Kremlin March 2 for a meeting with Russian Foreign Minister Sergey Lavrov. This visit received almost no media coverage in Israel. Still, it is likely that even if the visit had taken place under normal, non-election circumstances, neither Prime Minister Benjamin Netanyahu nor Blue and White party leader Benny Gantz would have censured Russian President Vladimir Putin for hosting the heads of an organization defined by Israel — as well as by the United States, the European Union and additional organizations — as a terror entity. We can only guess at how senior Israeli figures would have reacted if such a visit had taken place in a European, Asian or Latin American state. But when Putin opens the Kremlin gates to Hamas, Netanyahu chooses to remain silent.

The Hamas figures in Moscow included head of the Hamas political bureau Ismail Haniyeh; his deputy, Saleh al-Arouri; and Moussa Abu Marzouk, another member of the political bureau. In a tweet, Abu Marzouk boasted about the official and fruitful talks underway and even included a picture of Haniyeh and himself presenting a modest gift to Lavrov — a painting of Al-Aqsa Mosque and a dove (the dove of peace?) hovering overhead.

This was not the first time that Hamas heads were received warmly in Moscow. Former head of Hamas’ political bureau Khaled Meshaal visited Moscow in March 2006, heading a delegation of Hamas seniors from Gaza and Damascus. This visit took place only a few weeks after Hamas won the elections of the Palestinian parliament and Haniyeh was appointed prime minister. At first, Meshaal was supposed to meet with Putin, but at the last minute, the rank of the visit was downgraded. The Hamas delegation had to make do with meeting the foreign minister in a meeting in the chambers of the Foreign Ministry in the city. Only the next day did the Hamas leadership conduct their publicized tour of the Kremlin.

That visit in 2006 could have perhaps changed the sad state of Gaza and Hamas; the latter searched for international recognition that would extricate it from the isolation and partial closure imposed by Israel on the Strip (that was the era before the uprising carried out by the movement in June 2007). But instead of acting like a calculated diplomat, Meshaal found refuge in his mantra that hadn’t changed and declared to Lavrov, “We will never recognize Israel.” Even the compromise formula that Moscow offered Hamas was rejected by Meshaal. Thus, the latter returned to Damascus with empty hands and a closure on isolated Gaza that has continued to this very day.

Meshaal met Lavrov again in August 2015 in Qatar, about a year after the 2014 Israel-Gaza conflict (Operation Protective Edge). At that point, Meshaal asked for assistance to the Strip in light of the terrible destruction of infrastructure and the thousands of people killed or wounded from bombardments by the Israel Defense Forces in the conflict. But aside from a lot of tsk-tsks from Lavrov regarding the terrible state of the Strip, Hamas received nothing. Now the movement’s leadership is again trying to recruit Moscow’s help, this time to complete the arrangement with Israel or at least receive guarantees to that effect.

But things have changed since Lavrov last met with Meshaal 14 years ago in the Kremlin — changes not only in Hamas but also in relations between Moscow and Jerusalem. After years of insubordination, Hamas has internalized that its “no” policy has not advanced the organization by an inch. True, the arrangement with Israel does not constitute official recognition of the existence of the State of Israel, but it is definitively a tacit admission.

The agreement between Israel and Hamas that has taken shape in the recent year — and that is being called an “arrangement” — requires a cessation of armed operations (acts of terror) by Hamas in exchange for the easing of economic sanctions. In other words: a de facto recognition of Israel without a formal, public announcement. Critics of Hamas in Gaza argue that the organization has abandoned the path of jihad and armed struggle, and there is some truth to that.

Haniyeh understands that one word of Putin to Netanyahu has much greater weight than all the talks conducted by the heads of Egypt’s intelligence with the highest-ranking members of Israel’s defense system, Shin Bet head Nadav Argaman and National Security Council director Meir Ben-Shabbat. Putin’s sponsorship of contacts for an arrangement can from Hamas’ point of view help to grease the wheels of an arrangement under the assumption that the Russians assume the role of involved mediator and that both sides cooperate in the process.

In general, both sides — Israel and Hamas — are interested in an arrangement and are willing to pay the price for it. For Hamas, this means renunciation of Jihad; as aforesaid, this translates into its silent acquiescence to the existence of the State of Israel. There is another, additional concession involved: an unspoken agreement that the border of the disengagement from Gaza begun by Israel in 2005 is the border between Gaza and Israel. The dream of liberating waqf land (the holy soil of Palestine) is relinquished. For Netanyahu, an arrangement with Hamas is an arrangement with a terror organization that succeeded in imposing terror on Israel — an arrangement with a terror entity that he himself had argued must be eliminated. Now he must lower his profile and come to an agreement with them instead.

In recent months, Netanyahu has allowed the flow of Qatari money to the Strip; this is what keeps Hamas alive. The prime minister is also willing to consider special easements, including printing thousands of work permits to laborers from Gaza and approving economic projects, which would, in fact, perpetuate the Hamas regime in the Strip. All this despite one painful point: Hamas has not prevented Islamic Jihad from firing rockets at Israel in innumerable rounds over the recent months.

The relations that Hamas wants to create with Moscow were not intended to replace Egyptian mediation. None of the movement’s leaders fool themselves into thinking that Egypt would be willing to give up its role as mediator. Hamas also understands that Egypt has control over Gaza’s “oxygen pipe,” which is the Rafah border crossing. But Haniyeh and other heads of the movement believe that Moscow must also join the cast and assume a minor role behind the scenes. That “role” would be to keep up the pressure on Netanyahu. And Netanyahu will, indeed, think twice before saying “no” to Putin.

So far, Netanyahu and the heads of Israel’s defense systems have cooperated with Egyptian intel heads with full understanding. Both Israel and Egypt view Hamas as a problematic organization that must be under suspicion at all times. One example is the limitations placed on Haniyeh by the Egyptians following Haniyeh’s last visit to Iran. The addition of a heavyweight player like Moscow to the arrangement-agreement would be welcomed by Israel, even if only “part time.” Moscow’s presence may even change the clear rules of the game created after the fall of the Muslim Brotherhood in Egypt in 2013.

In any case, Moscow’s presence has an advantage that no one can deny: Both Israel and Hamas know that if Moscow gets involved and backs an arrangement-agreement, no one will dare play with it.