Secretary of State Mike Pompeo used a teleconference of leading industrialized nations' foreign ministers to urge tougher international action on Iran and its regional proxies in line with the US maximum pressure campaign. 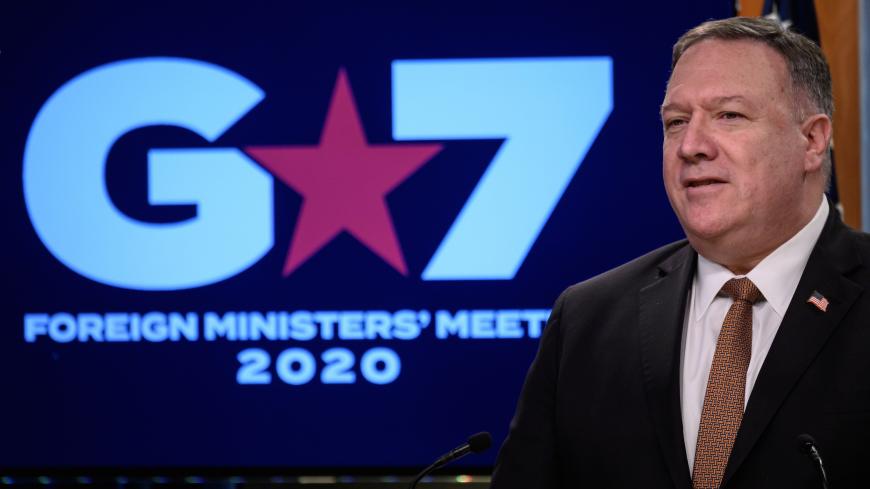 US Secretary of State Mike Pompeo speaks during a news conference at the State Department in Washington, March 25, 2020. - Andrew Caballero-Reynolds/Pool via REUTERS

Secretary of State Mike Pompeo today used a teleconference of foreign ministers of the Group of Seven leading industrialized nations to urge tougher international action on Iran and its regional proxies in line with the US maximum pressure campaign.

“I thank the countries for holding the regime accountable through actions like banning Mahan Air and designating all of Hezbollah and other Iran-backed terror groups as terrorist organizations,” Pompeo told a small group of reporters after the conference. “Our pressure campaign remains designed to induce Iran to act like a normal country. I urged our G-7 partners to go further in joining us, and they should especially stand with the US in ensuring that Iran never obtains a nuclear weapon.”

Why it matters: The G-7 member states — the United States, Canada, Britain, France, Germany, Italy and Japan — have a wide array of divergent Iran policies, some of which are closer to the American position than others.

For instance, Britain in January joined the United States and Canada in designating both the military and political wings of Lebanon’s Iran-backed Hezbollah group as a terrorist organization. But France, Germany and Italy maintain a distinction between the paramilitary wing of Hezbollah and the political party, which serves as part of Lebanon’s governing coalition.

And while the United States sanctioned Iran’s Mahan Air carrier in 2011 for supporting the Islamic Revolutionary Guard Corps’ Quds Force, the United States struggled for years to convince Europe to follow suit. France, Germany and Italy finally did and banned Mahan Air last year after Iran allegedly attempted to assassinate members of the Mujahedeen-e-Khalq opposition group in France and Denmark.

Still, the United States remains isolated in its decision to withdraw from the Iran nuclear deal. While Europe has activated the deal’s dispute resolution mechanism in a bid to force Iran back into compliance with the accord, the European parties to the agreement still hope to restore it.

The State Department also rebuked France this week for releasing an Iranian wanted for evading sanctions in a prisoner swap with Tehran despite an extradition treaty with the United States.

What’s next: Another fissure between the United States and Europe could emerge over Tehran’s request for a $5 billion International Monetary Fund loan to help it fight the coronavirus pandemic, which has hit Iran particularly hard. Europe has come out in support of the loan, but a State Department spokesperson declined to comment on the loan this week in response to an Al-Monitor query.

Know more: Iran has pointed to the US maximum pressure campaign to justify dismissing Washington’s effort to provide coronavirus assistance and has instead called for sanctions removal. Read more about President Hassan Rouhani’s reaction to the US offer on Al-Monitor.