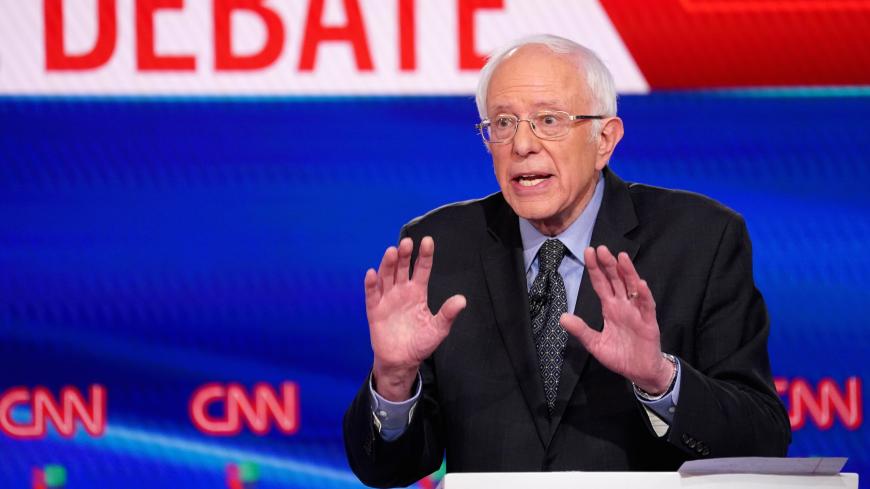 Democratic US presidential candidate Sen. Bernie Sanders, I-Vt., speaks during the 11th Democratic debate of the 2020 US presidential campaign, held in CNN's Washington studios without an audience because of the global coronavirus pandemic, in Washington, US, March 15, 2020. - REUTERS/Kevin Lamarque

“Iran is facing a catastrophic toll from the coronavirus pandemic,” Sanders wrote on Twitter. “US sanctions should not be contributing to this humanitarian disaster. As a caring nation, we must lift any sanctions hurting Iran’s ability to address this crisis, including financial sanctions.”

Why it matters: Tehran said that more than 1,100 Iranians have died and some 17,000 have been infected as a result of the coronavirus. President Hassan Rouhani wrote to several world leaders that Iran’s response to the crisis has “been severely hampered by US sanctions.” While Iranian leadership initially downplayed the crisis, both Reformist and conservative parliamentarians have accused Tehran of underreporting the initial number of cases, allowing the pandemic to spread.

In a letter to the United Nations last week, Iranian Foreign Minister Mohammad Javad Zarif wrote that the sanctions, which are the main pillar of Trump’s Iran maximum pressure campaign, have curtailed Tehran’s access to medical supplies. But the Treasury Department did issue a general license exemption last month allowing for the trade in humanitarian goods through Iran’s central bank.

What’s next: While Trump has repeatedly stated his desire to cut down the US military presence in the Middle East, he has so far remained committed to the maximum pressure campaign. Secretary of State Mike Pompeo announced new US sanctions on nine entities in South Africa, Hong Kong and China for “significant transactions” in petrochemical trade with Iran. The Trump administration also designated three Iranian individuals.

Sanders and his rival, former Vice President Joe Biden, the overwhelming favorite to win the Democratic nomination, both support reentering the nuclear deal — which would involve lifting sanctions. However, that deal is on life-support as Iran has stepped up its uranium enrichment activity and stockpile in response to US sanctions.

Know more: Al-Monitor will keep you posted on the latest coronavirus updates in Iran here. An embattled Rouhani has defended his government’s response to the pandemic as Tehran instates a mandatory quarantine on hard-hit areas. Iran has also shuttered schools, mosques and is asking people to stay home for the Nowruz holidays, when it’s customary for families to visit elderly relatives — one of the groups with the highest coronavirus mortality rate.