Sudan's rejection of an Arab League resolution supporting Cairo in negotiations with Addis Ababa over the filling of Ethiopia's Renaissance Dam has caused alarm in Egypt, already at odds with Ethiopia over construction of the multibillion dollar dam. 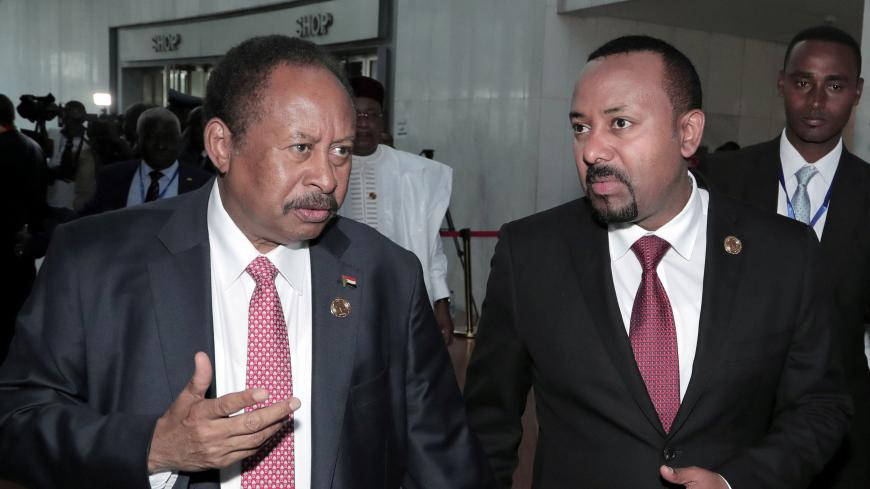 Sudan's Prime Minister Abdalla Hamdok and Ethiopia's Prime Minister Abiy Ahmed arrive for the opening of the 33rd Ordinary Session of the Assembly of the Heads of State and the Government of the African Union in Addis Ababa, Ethiopia, Feb. 9, 2020. - REUTERS/Tiksa Negeri

Sudan has rejected an Arab League resolution, expressing support for Cairo in negotiations with Addis Ababa on Ethiopia’s Grand Ethiopian Renaissance Dam (GERD), a move that raised eyebrows in the Arab League and alarmed Egyptian authorities.

The Arab League statement — the outcome of deliberations at a regular session of the Arab Foreign Ministers Council held March 5 — expressed the pan-Arab bloc's rejection of “any form of infringement on Egypt's historical rights to the waters of the River Nile.” The statement further stressed the need for Ethiopia “to adhere to the principles of international law,” noting that “Egyptian water security is an integral part of Arab national security.”

The resolution, put forth by Egypt, was endorsed by all countries in the 22-member state organization, save for Sudan. An initial draft statement had cited the historical rights of both Egypt and Sudan to Nile waters; but Sudan, in a surprise move, requested that its name be removed from the text, saying it had not been consulted by Egypt.

An Arab League source who spoke with Al-Monitor on condition of anonymity denied that Sudan had not been consulted, insisting that the Sudanese diplomatic mission in Cairo had been handed the draft document March 1 (four days before the meeting). “But we received no response from the Sudanese side prior to the meeting,” he lamented.

The Arab League statement also lauded as “fair” a US-brokered draft agreement on filling and operating the dam. The league said the agreement “serves the interests of the three countries,” in reference to Egypt, Sudan and Ethiopia, which are engaged in the dam negotiations mediated by the US Treasury Department.

The US-sponsored talks, which started in mid-November, hit a glitch in late February when Ethiopia failed to attend what would have been the last round of negotiations in Washington. Ethiopia said it rejects the US Treasury's claim that “an agreement had been finalized.” The draft agreement was signed by Egypt but not by Sudan, which chose to side with Ethiopia, much to the chagrin of its northern neighbor.

Sudan, meanwhile, said the Arab League document was not in its best interests and cautioned against involvement of the Arab states in the Nile water dispute, fearing the Arab League resolution may lead to confrontation between them and Ethiopia. A Sudanese Foreign Ministry statement released March 6 said, “The draft resolution does not serve the spirit of dialogue … to reach an agreement between the three countries … on the process of filling and operation of the dam.”

The statement added that Sudan had submitted a proposal to amend the text in line with the goal of encouraging the parties to continue dialogue and avoid escalation of the dispute and polarization that does not serve the desired goal of agreeing to a road map that serves the water interests of the three countries. The statement also called on Egypt and Ethiopia to return to negotiations to reach “a satisfactory agreement.”

“Khartoum completely rejects the internationalization of the Renaissance Dam issue,” Tijjani Adam, the secretary-general of the Sudanese Energy, Mining, Electricity and Regulation Authority, was quoted by the Ethiopian News Agency as saying. He said, “Internationalization of the dispute would not benefit the countries concerned and would only complicate things further and delay the expected solutions.”

Egypt's Foreign Ministry expressed its "regret” over Sudan's reservations to the Arab League document and said Sudan's permanent representative at the Arab League had received the draft statement several days before the ministerial meeting but had not commented on it. In a statement released to the press March 8, Foreign Ministry spokesperson Ahmed Hafez said Egypt had acquiesced to the Sudanese request to have any mention of Sudan removed from the draft document. He added that amendments proposed by Sudan — if accepted — would have diluted the impact of the Arab League decision. Egypt's Foreign Minister Sameh Shoukry. meanwhile, has visited a number of Arab countries in recent days to drum up support for Egypt and win regional allies in the country's dispute with Ethiopia.

Egyptian analysts and the country's largely pro-government media, meanwhile, rebuffed Sudan's “controversial” stance vis a vis the Ethiopian dam, saying that it showed a clear bias on the part of Egypt's southern neighbor in favor of Ethiopia. An opinion editorial published in the privately owned Raialyoum news website on March 5 slammed the decision by Sudan's military government to move away from the Arab fold and to publicly announce its choice to side with Ethiopia against Egypt at the Arab League. Some of the questions in bold print above the editorial were “In whose interest is it to collude (with Ethiopia) to starve millions of Egyptians? Who is behind this dramatic shift in Sudan's official position?”

Sudanese journalist Mohamed Mostafa Gamea responded to the criticism in an editorial published in the Sudanese Sama news website. “The Sudanese are united in their position over the Renaissance Dam, a position that is in line with the revolutionary goal of (putting) Sudan's interests first,” he wrote.

“Sudan is a sovereign state and has the right to express its reservations and oppose what it deems harmful to the interests of its people. … The Sudanese position on the Renaissance Dam remains unchanged; we have written several articles in the past highlighting the benefits of the dam for Sudan and its people. Even during the era of ousted President Omar al-Bashir, the Sudanese government and the people had supported Ethiopia in its right to construct the dam — not as a conspiracy against Egypt nor out of hatred for the Arabs or Islam as the Egyptian editorial states, but because the dam will benefit Sudan; it is in the country's higher interests to see the project completed,” Gamea added in his article.

Sudan has supported Ethiopia's $6.4-billion dam construction project since 2013 when it gave the upstream country the green light to change the course of the Blue Nile, one of the Nile River’s most important tributaries, in the conviction that Khartoum would enjoy a large share of the electricity generated by the dam. Sudan enjoys strong economic ties with Ethiopia and has repeatedly praised the latter's role in mediating a truce between Sudan's warring factions and its supportive role in bringing peace and stability to Sudan during the recent revolt that ousted Bashir.

For Egypt, meanwhile, the Nile River is a lifeline supplying more than 90% of the country's freshwater. Egypt considers Ethiopia's hydroelectric dam a national security threat, fearing the dam will threaten its already scarce water resources, despite assurances from Ethiopia that the dam will not disrupt the river's flow nor cause significant harm to the downstream countries. In a statement published on its official Facebook page March 4, Ethiopia's Foreign Ministry announced it would go ahead with plans to fill the dam despite the breakdown of the talks.

"Ethiopia as the owner of the GERD, will commence first filling of the GERD in parallel with the construction of the Dam in accordance with the principles of equitable and reasonable utilization and the causing of no significant harm as provided for under the Agreement of the Declaration of Principles," reads the statement, referencing the 2015 agreement on the dam signed in Khartoum between the three countries.

But Gamal Bayoumi, a former assistant to the foreign minister and secretary-general of the Arab Investors Union, blamed Sudan's overtures for disengagement from Arab states on “the lack of experience of the new government in Sudan.” Bayoumi lauded Egypt's response to the action as “balanced” and “diplomatically correct.”

Bayoumi told Al-Monitor that Egypt had dispatched its intelligence chief, Gen. Abbas Kamel, to Sudan after the recent failed assassination attempt on the life of Sudanese Prime Minister Abdalla Hamdok. On March 9, the Sudanese premier survived an explosion — widely believed to have been an assassination attempt — near his convoy as he headed to his office in Khartoum.

“The move was meant to send a clear message to Khartoum that Egypt stands with the transitional government in Khartoum in confronting terrorism and that the two countries share more than just a common border, they share a common destiny,” Bayoumi added.