The Egyptian government announced a series of widely welcomed economic measures to help protect the industrial sector against the negative repercussions of the coronavirus. 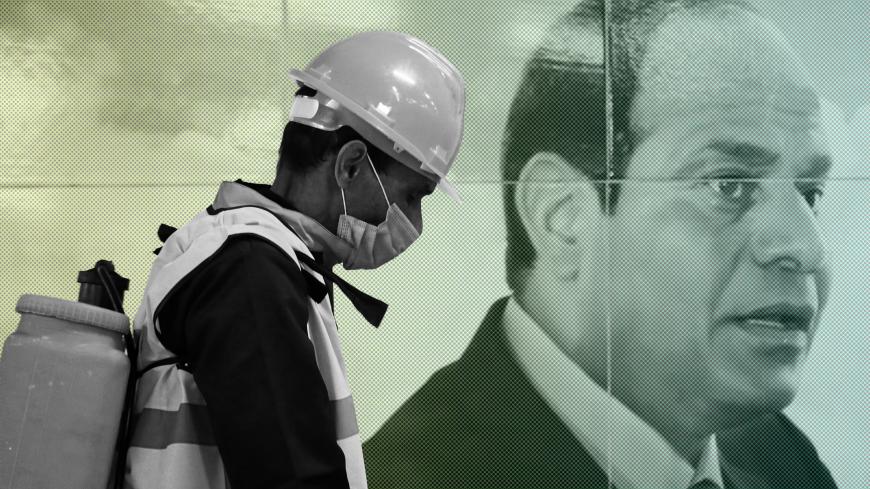 A medical team personnel member is seen beside a banner for Egyptian President Abdel Fattah el-Sisi, as he sprays disinfectant as a precautionary move amid concerns over the novel coronavirus at the underground Al Shohadaa "Martyrs" metro station, Cairo, Egypt, March 22, 2020. - REUTERS/Mohamed Abd El Ghany

Egypt is implementing a raft of measures to boost the industries and businesses expected to be hit hardest by the COVID-19 pandemic.

On March 17, Prime Minister Mustafa Madbouly announced the government has taken steps to support the industrial sector and deal with the expected economic repercussions of the spread of the novel coronavirus.

The government decided to reduce the price of natural gas provided to industries to $4.50 per million British thermal units (Btu), down from $5.50. Electricity prices were also lowered for heavy industry by 0.10 Egyptian pound ($0.0064) per kilowatt-hour.

For exporters, Egypt is providing 1 billion Egyptian pounds (about $63 million) in March and April to help cover some of the dues they pay into a government fund for their benefit. The government also will pay 10% of those dues in cash to exporters in June.

Meanwhile, authorities are delaying due dates for property taxes on factories and tourist facilities for three months.

It also halved the dividends tax rate for companies listed on the stock exchange to 5%.

The Central Bank of Egypt (CBE) has also cut key interest rates by 3%, or 300 basis points, with the overnight lending rate now standing at 10.25% and the overnight deposit rate at 9.25%. The rates are the lowest since early 2016. On March 20, Fitch Ratings hailed the CBE’s decision to cut interest rates as a "bold" move to help offset the likely effects of the coronavirus pandemic on the economy.

On March 16, the CBE delayed by six months the due dates for all types of consumer and small-business loans including mortgages and car loans, but the move does not extend to credit card payments.

Economists and industrialists have praised such measures, saying that they are much needed to keep businesses running and prevent an economic crisis.

In a March 18 tweet, business tycoon and chairman of Egyptian Steel Ahmed Abou Hashima welcomed the government's actions, which he said are historic and will contribute greatly to the development of the industrial sector.

Sobhi Nasr, head of the Association of Industrial Investors, said the economic package reflects the state's key role in stimulating the national economy in times of crisis.

“The state has fulfilled its responsibilities in reducing natural gas and electricity prices for factories as well as cutting interest rates. Now, the ball is in the court of investors and factory owners, who should assume their responsibility in resuming and increasing production,” Nasr told Al-Monitor.

“Exporters will face problems in shipping, transportation and the closure of some export markets. Therefore, spending a billion Egyptian pounds for exporters to pay their dues is a good step, but that represents less than 5% of the total exporters’ dues,” he told Al-Monitor.

Issa also advocates reducing the price of natural gas for factories to $3.50 per million Btu instead of $4.50, especially since the average world price has been well below $2.50 for months.

"We don't deny that the government's decisions are a very good and positive step, but we hope for more decisions in the same direction to face the global repercussions to confront the coronavirus,” he added.