The Central Bank of Egypt is taking steps to protect the country's economy as it weathers the coronavirus pandemic. 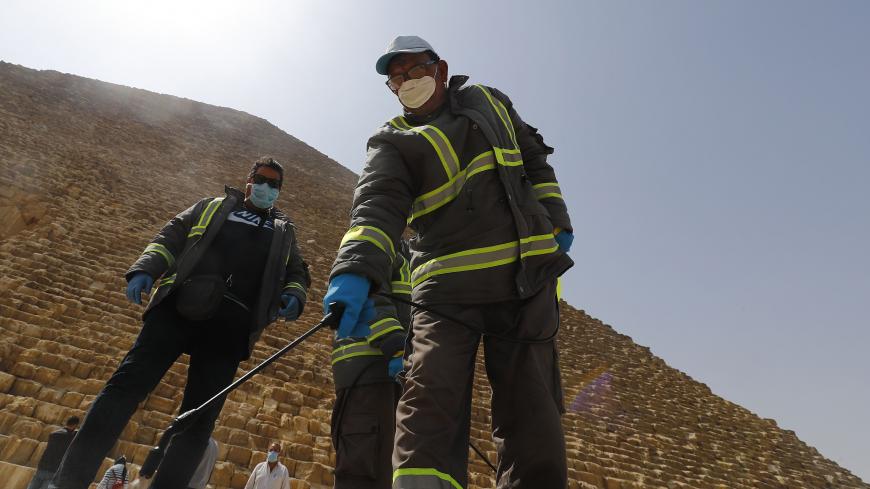 A 3% interest rate cut by the Central Bank of Egypt and a financial lifeline worth 20 billion Egyptian pounds ($1.27 billion) have lifted Egypt’s equities over the past week. However, the positive effects may be short-lived if the COVID-19 crisis persists.

The central bank cut interest rates March 16 by 3%, aiming to revive the local stock market, which has been battered by massive selloffs since March 2, after Egypt reported its first coronavirus case Feb. 14. The overnight deposit and lending rates now stand at 9.25% and 10.25%, respectively, according to the bank’s website.

Mohabeldeen Agena, head of technical analysis at the Cairo-based investment bank Beltone Financial, told Al-Monitor, “The rate cut is a positive move for boosting the economy in general. The central bank’s Monetary Policy Committee has taken the preemptive step to withstand any negative impacts inflicted by the coronavirus. We may say this is an anti-recession move.”

Agena said the rate cut will help soften a downturn that is expected to worsen. “We can't see [the full] immediate fruitful results from the rate cut now. We should be aware that this is an exceptional circumstance. The move would have a greater effect if economic conditions were normal. The slump caused by the COVID-19 concerns has made it necessary,” he said.

Agena explained that a falling inflation rate is another key factor behind the move. “Staying at home means less spending. The inflation rate plunges. The goal is to make it easier for the business community by reducing the lending rate,” he said.

As for local equities, the rate cut should lure investors and the business community in general into stocks, Agena said.

Egyptian President Abdel Fattah al-Sisi instructed the central bank to earmark 20 billion pounds on March 22 for shoring up the stock market. The next day, the EGX30 index jumped above 10,000 points, before easing to 9,770 points on March 24, according to the Egyptian Exchange’s website.

“The rebound from 8,750 points to above 10,000 points was a normal rebound, which is part of the market’s corrective trend. In my opinion, the 20 billion pounds should be allocated for bolstering the listed companies, which are facing declines in earnings as the coronavirus fears grip the economy,” Agena said.

Central bank head Tarek Amer described the rate cut as a precautionary measure implemented because of the coronavirus' potential harm to Egypt's economy.

“We don’t want to wait until a negative impact takes place. Our strong economic and financial conditions have made sacrifices possible to help the economy,” Amer was quoted as saying by al-Youm7 news March 17.

Abdel Mottaleb Abdel Hamid, an economics professor at the Cairo-based Sadat Academy for Management Sciences, told Al-Monitor, “We should take into account that the current circumstance is historically exceptional. Throughout history, the Egyptian economy has never gone through a similar situation. In normal conditions, the rate cut would have had a great impact, as demand would get a boost from lower rates.”

The professor pointed out that a slump may hit the economy in a prolonged crisis scenario, which would necessitate fresh measures.

“Slashing the borrowing costs by 3% [aims to] usher in fresh direct investments. However, the picture is not clear for the business community due to the panic in the local market. The situation in other countries, like Italy for instance, has escalated public worries in Egypt,” Abdel Hamid said.

However, the professor warned that slashing interest rates might affect the foreign exchange market, as the dollar will strengthen versus the pound.

“The central bank is scaling down the rates as the inflationary pressures ease. The monetary policymakers have relied on high interest rates since the pound flotation in 2016 to lure dollar inflows into indirect investments, for example, treasury bills and sovereign debt instruments. The rate cut may strengthen the greenback on the local foreign exchange market,” Abdel Hamid said, noting that the pound was strengthening versus the US dollar prior to the coronavirus outbreak.

As for the 20 billion-pound stock market lifeline, Abdel Hamid argued that equities “are driven by supply and demand” and the central bank won’t buy shares.

“The cash may go to market makers for creating demand and supply of listed stocks to increase transactions and daily traded volumes,” he added.