Turkish Defense Minister Hulusi Akar spoke by phone with his Russain counterpart Sergey Shoigu March 10 about the progress of the bipartisan protocol over Idlib that Russian President Vladimir Putin and Turkish President Recep Tayyip Erdogan signed in Moscow on March 5. 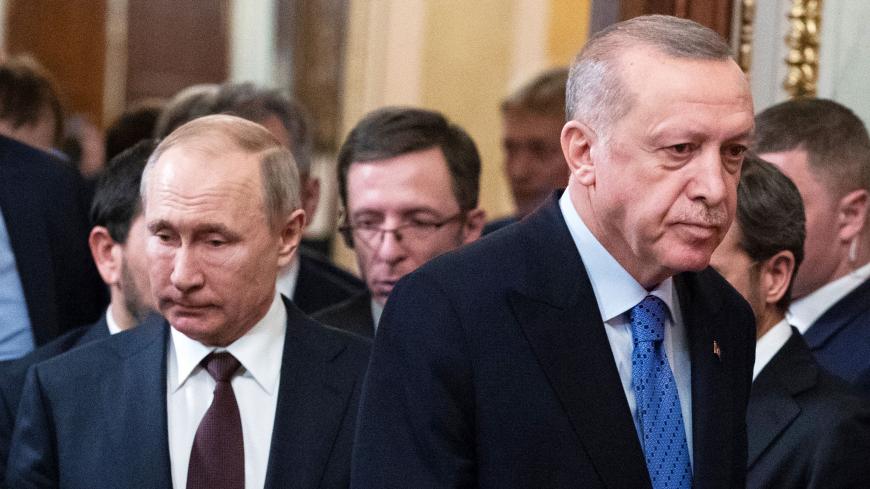 Turkish Defense Minister Hulusi Akar spoke by phone with his Russian counterpart Sergey Shoigu March 10 about the progress of the bipartisan protocol over Idlib that Russian President Vladimir Putin and Turkish President Recep Tayyip Erdogan signed in Moscow on March 5.

Earlier, Turkish Foreign Minister Mevlut Cavusoglu confirmed that the Russian military delegation arrived in Turkey to discuss concrete parameters of the security corridor along the M4 highway, a strategic roadway that traverses Syria east to west through Idlib province. The parties will also discuss details for joint Russian-Turkish military patrols of the highway from the settlement of Trumba (roughly a mile to the west of Saraqeb) to the settlement of Ain al-Havr.

Why it matters: Ever since Putin and Erdogan agreed on terms for a new deal on Idlib, both parties have eyed reinforcing their own positions in Syria amid the holding cease-fire.

Erdogan flew to Brussels to demand “concrete support” from his NATO allies in Syria. His pledge was meant to be felt by the Europeans as thousands of refugees flocked to the border with Greece after Turkey said it would no longer keep them on its soil.

Meanwhile in Russia, military and analyst circles have been discussing options for beefing up the Syrian air defense systems to halt future possible Turkish — as well as Israeli — raids on Syrian military and associated facilities.

“Syria couldn’t down the Turkish F-16 with its S-200 since it’s an old system; it really belongs to the previous generation. … The geographical landscape around Idlib is also such that it hampers S-200 to successfully track aircrafts,” wrote Alexey Podberezkin, head of the Center for Political and Military Studies at the Moscow State Institute of International Relations, in his op-ed for Sputnik.

“If they had systems of a more advanced modification, such as S-300, the chances of downing Turkish jets would have been higher,” he argued.

“[Turkey’s statements] have nothing to do with the real state of things and are nothing but an exaggeration," the ministry argued.

The Russian military clarified that most of Syria's air defense systems, including the Pantsyr systems, are deployed near Damascus, and only four of them are being used near the Idlib de-escalation zone.

What’s next: The statement by the Russian military is remarkable in that it signals Moscow is more reluctant now to concede its own positions in the information struggle with Turkish narratives on Idlib. By allowing the Turkish military to conduct an offensive on Assad’s positions for well over two days, Russia, in a way, paid Erdogan for the loss of almost 40 servicemen with its own reputation among the Syrians. Now that the new deal is in place placating Erdogan’s rhetoric makes less sense, but having Turkey deliver on its commitments — old ones as much as new ones — is a priority.

Know more: Check out a Russian angle on why the new deal on Idlib matters from Maxim Suchkov, and see the Turkish take by Metin Gurcan.