With renewed fighting in northern Syria, regime officers are transferring conscripted young men from Daraa in the south to the front lines of the battles, leading to defections. 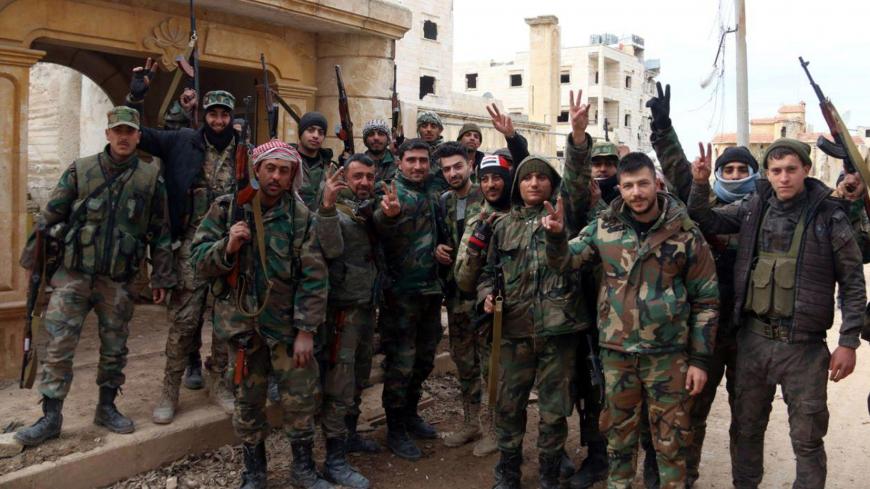 DARAA, Syria — Clashes continue between Syrian regime forces and armed volunteers on one hand and opposition fighters on the other in Daraa province in Syria’s deep south.​

The Russian military police intervened in the Daraa clashes and brokered an agreement under which opposition fighters would hand over their weapons and the weapons of the volunteer groups would be withdrawn. Opposition members who refused to abide by the agreement were moved to Idlib in the north, escorted by Russia forces and members of the humanitarian group Red Crescent. They arrived in Idlib March 5 and joined the opposition there.

This agreement is similar to the Russian-sponsored reconciliation agreement reached in July 2018 between the regime and the opposition in southern Syria. Back then as well, those who refused the agreement’s terms were moved, with their families, to Idlib, where most of them joined opposition factions there.

Meanwhile, those who remained joined the regime’s ranks under so-called reconciliation factions to avoid being pursued by security forces. The regime promised those men they would be able to conduct their military service in southern Syria only. But when the fighting escalated in northern Syria in February of this year, regime officers deployed them to the front lines in eastern Idlib.

Omar al-Hariri, an official in the Daraa Martyrs Documentation Office, spoke with Al-Monitor about the clashes. The group is an independent, nonprofit, nongovernmental human rights organization that compiles statistics on victims of the Syrian civil war from Daraa.

“We have documented the participation of hundreds of people from Daraa in the battles taking place in northern Syria, be it alongside opposition factions or regime forces. Ten opposition fighters from Daraa province were killed during the clashes against regime forces in Aleppo and Idlib provinces in February," Hariri said.

“The clashes led to the killing of about 30 members of the reconciliation factions. Several bodies were handed over to their families, and they were buried in Daraa graves. … The fate of the rest of the members involved in the battle is still shrouded in secrecy, and there are reports that field commanders in the regime's army have executed members who refused to participate in the battle."

Abu Mahmoud al-Hourani also provided statistics to Al-Monitor. Hourani is a member of the Violations Documentation Office in the Horan Free League, a local media organization that documents violations in southern Syria and issues monthly reports. He confirmed that during February, the security situation was still chaotic in Daraa.

“The office documented 37 assassination [attempts] that led to the killing of 26 people, the wounding of 12 others and the arrests of three young men. Also, it documented the killing of 12 young men in [regime prisons] in Damascus, four of them from the city of Ghabaghib, north of Daraa. These were arrested a year ago, despite the fact that their legal status was resolved after the regime forces took control of southern Syria. Their families were handed over their identification documents and informed of their deaths Feb. 27. The same town received the body of a member of the Syrian Army" on Feb. 29, Hourani added.

Sami al-Ahmad, a member of the reconciliation factions who was recently wounded during clashes in the vicinity of Saraqeb, told Al-Monitor, “I was arrested two months ago at one of the regime’s checkpoints in Damascus on charges of violating compulsory military service as I was heading to work at the University of Damascus. In late February, I was taken, along with hundreds of detainees, to participate in the battles taking place in eastern Idlib province, without us receiving any combat training.”

Ahmad continued, “A few days ago, I was hit by Turkish artillery shrapnel after the regime's army officers sent the new members and the reconciliation faction fighters from Daraa, Quneitra and the Damascus countryside to the battle front lines, making them easy prey for the opposition factions. The regime neither supported them nor secured their withdrawal.”

Ahmad added, “This huge number of fatalities is terrifying, daunting thousands of members of military units that are yet to participate in the battle. As a result, hundreds of newly joined members are defecting from the army for fear of being transferred to the battlefield at any moment."

Adham Akrad, a member of the central committee that negotiates with regime forces about violations of the reconciliation agreement, told Al-Monitor, “The lack of long-term solutions to guarantee the agreement will be implemented led people to lose confidence in the regime. Therefore, civil actors and dignitaries in the cities and towns of Daraa organized dozens of protests and demonstrations denouncing the regime's violations, especially considering that status resolution cards are no longer valid and the youth are being threatened with arrest if they don't join military service. Thousands of students have been deprived of the opportunity to complete their studies.”

Temporary status resolution cards were given to individuals who accepted the reconciliation agreement so they wouldn't be arrested.

Of note, Akrad signed the agreement but refused to join the reconciliation factions and encouraged disobedience and protests against the Syrian regime practices.

“With the start of the current round of fighting in northern Syria, these false promises and reassurances have not stopped hundreds of young people who hail from areas that signed the agreement from defecting from the army. Meanwhile, thousands of young people opted for migration despite that option being fraught with danger,” Akrad added.

Asked about the dominant factors pushing young people to leave their areas, Abdel Hakim al-Masri, minister of economy in the opposition's Syrian Interim Government, told Al-Monitor, “The absence of civil society organizations led to the spread of unemployment among the youth, as the regime refused to grant young graduates work permits and confiscated all of their properties during its control of southern Syria in late July. It used to provide more than 20,000 job opportunities to the region’s youth. Also, humanitarian aid that would have provided more than 100,000 food parcels for families in need has been cut off.”

As the pace of military operations increases, the economic situation deteriorates and young people avoid joining the military service, the Daraa area is bound to witness renewed skirmishes and combat operations with the regime forces due to the lack of trust between the two parties and the setback witnessed in implementing and enforcing the reconciliation agreement.