Algeria's president called for measures that would prioritize citizens' health but restrict their freedoms. 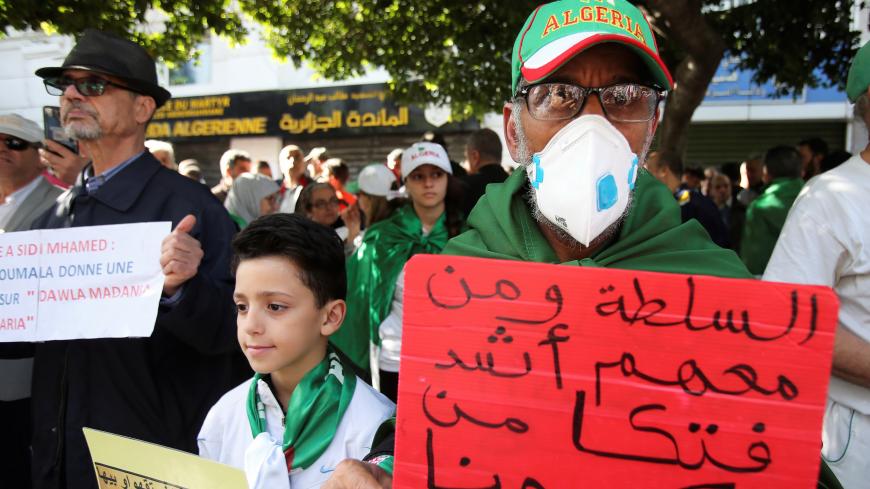 A demonstrator wearing a face mask carries a placard that reads: "The authority and its supporters are deadlier than the Coronavirus " during an anti-government protest in Algiers, Algeria Feb. 28, 2020. - REUTERS/Ramzi Boudina

Following a year of mass anti-government demonstrations, Algeria is tightening its grip on the streets with a ban on all protests and marches in the wake of the coronavirus outbreak. During a televised address Tuesday, President Abdelmadjid Tebboune told the nation it must prioritize the health of its citizens.

“The lives of citizens are above all considerations, even if this requires restricting some freedoms,” said Tebboune.

The largely peaceful protest movement, known as Hirak, erupted in February 2019 when 82-year-old President Abdelaziz Bouteflika announced his plan to run for a fifth term. Protesters succeeded in forcing the resignation of the longtime president, along with other members of the county’s political elite, and in the year since have taken to the streets weekly to demand political reforms and an end to government corruption.

On Wednesday, Algeria announced that its confirmed cases of coronavirus had risen to 72, including six deaths. The outbreak is centered mostly in the northern Blida province, southwest of the capital, where 17 members of the same family were infected with the virus.

Prime Minister Abdelaziz Djerad announced Monday the country would suspend all sea and air travel between Algeria and Europe, as well as flights with several African countries. The national air carrier, Air Algerie, announced Wednesday it would halt all international flights until further notice.

Confirmed cases of the coronavirus are relatively low across North Africa, with Libya reporting no infections at all.