US threatens to stop Yemen aid if Houthis don’t cooperate

USAID has informed Houthis rebels in Yemen that it will halt humanitarian aid deliveries to areas the rebels control if they continue to interfere in the distribution of assistance. 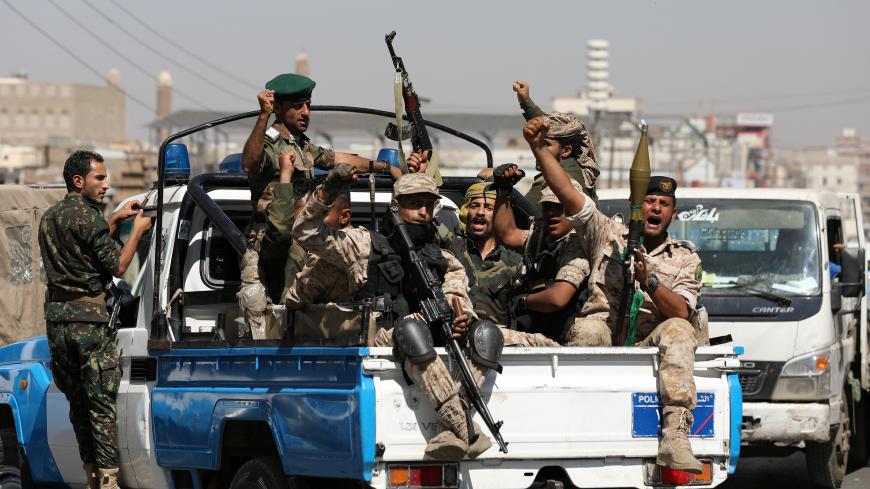 Houthi troops ride on the back of a police patrol truck in Sanaa, Yemen, Feb. 19, 2020. - REUTERS/Khaled Abdullah

The United States will halt humanitarian assistance to Houthi-controlled areas in Yemen, where a majority of the country’s population lives, if the rebels refuse to remove obstacles to aid distribution. The announcement, made Feb. 25 by the US Agency for International Development (USAID), came amid new evidence that humanitarian assistance is not reaching its intended targets and growing security concerns by the agency and its partners.

“This decision is a last resort that follows more than a year of advocacy and diplomatic engagement calling on the Houthis in Yemen to respect humanitarian principles and allow the provision of needs-based humanitarian assistance without interference,” a USAID spokesperson told Al-Monitor. If the Houthi rebels refuse to cooperate, the aid suspension will go into effect in late March.

USAID provides supplies to the people of Yemen along with other support through partners on the ground and international non-governmental organizations. The agency informed its partners in February about its decision to potentially halt assistance.

The rebels have granted aid workers access to areas under their control, but they have also made excessive demands, including a 2% slice of the UN aid budget designated for Yemeni assistance, a condition the United Nations and its donors have rejected.

The USAID spokesperson remarked, “If we are forced to reduce aid, we would maintain the most critical life-saving activities that directly mitigate famine such as treatment of acute malnutrition and cholera.”

In 2014, Yemen erupted into civil war after an unsuccessful political transition following the Arab Spring that led to the ouster of President Ali Abdullah Saleh. Houthi rebels, many loyal to Saleh, seized Sanaa, the country’s capital and largest city, and demanded the formation of a new government.

A coalition of states from the Middle East and Africa — led by Saudi Arabia and supported by US intelligence sharing, aerial refueling and search-and-rescue operations — launched a military campaign against the insurgents. Yemen was then hit with economic warfare, including a blockade of its air and seaports by the Saudi coalition, with the US Navy halting and searching vessels suspected of carrying arms to the Houthis. Later, the United States deployed warships in the region to monitor Iranian cargo en route to Yemen.

Yemen relies on imports of up to 90% to meet the population’s daily food needs, according to UN figures from 2017. As the blockade intensified in 2017, the United Nations warned that the “catastrophic” blockade could endanger the lives of millions dependent on aid for survival as well as others unless Saudi Arabia stopped blocking the flow of aid into the country.

The United States enacted a year-long freeze on development projects in Yemen in 2015, shortly after the conflict erupted, and as recently as June of last year, the World Food Programme (WFP) halted aid to Houthi-held areas for two months when the agency was denied introducing a new registration process that would ensure food assurance was reaching the intended people. WFP resumed deliveries in August after the Houthis provided a written guarantee that the WFP could begin this registration process. A WFP source said the registration process is only due to start now because of continued interference.

Systematic interference in the WFP’s delivery of emergency food assistance began in northern Yemen in 2019, when hundreds of WFP trucks were detained in rebel-held areas. Some trucks, a UN source in Yemen said, were held for six months. The interference has led to more than 5,500 metric tons of food spoiling since the beginning of last year, the UN source told Al-Monitor.

“We continue to face fierce resistance to simply just do our job to keep people alive,” said David Beasley, WFP executive director, briefing the UN Security Council last year. Beasley said his agency had uncovered “serious evidence” that some supplies were going to the wrong groups.

The United Nations and its partners have also faced growing security concerns. Rebels have begun to detain trucks at checkpoints, block access to warehouses, and threaten staff and deny them permission to travel in the country, said a UN source. On February 23, the Saudi coalition spokesman Col. Turki al-Malki said in a statement that Saudi forces had stopped a rebel attack and discovered a number of mines in the southern Red Sea, a major commercial shipping channel.

A USAID spokesperson told Al-Monitor via email that the rebels continue to make extreme demands, such as imposing a tax on humanitarian aid from the United Nations, and to cause delays, blocking critical needs assessments and harassing aid workers.

The rebels also demanded the right to more closely monitor UN aid funding, including roughly $370 million a year to pay aid workers’ salaries and other administrative costs, according to documents leaked to the AP and a subsequent report by the LA Times.

Nearly 20 million people in Yemen lack access to basic health care, and more than five million are a step away from famine, USAID said in a statement in 2019. The United Nations has sent $8.35 billion on humanitarian assistance to Yemen since 2015.

The United States is one of the largest aid donors to Yemen. Last year, Washington provided it assistance totally more than $700 million. The amount included a $36 million award in October to Gateway to Education, a five-year program for children. USAID’s development portfolio in Houthi-controlled territories is less than $30 million, according to an agency source. Projects like Gateway for Education would be suspended only in Houthi-held areas if USAID follows through on its threat.

“USAID will continue to provide aid in areas of Yemen where we are confident that our partners can implement programs without interference,” the USAID spokesperson told Al-Monitor.