Is Russia cozying up to Syria's Kurds amid rift with Turkey?

The United States has reportedly cautioned the Kurds not to fight Turkey in any potential escalation in Syria, but Russia appears to have moved closer to the Kurds, as suggested by Kurdish collaboration with the Syrian army in areas along Idlib’s boundaries with Afrin. 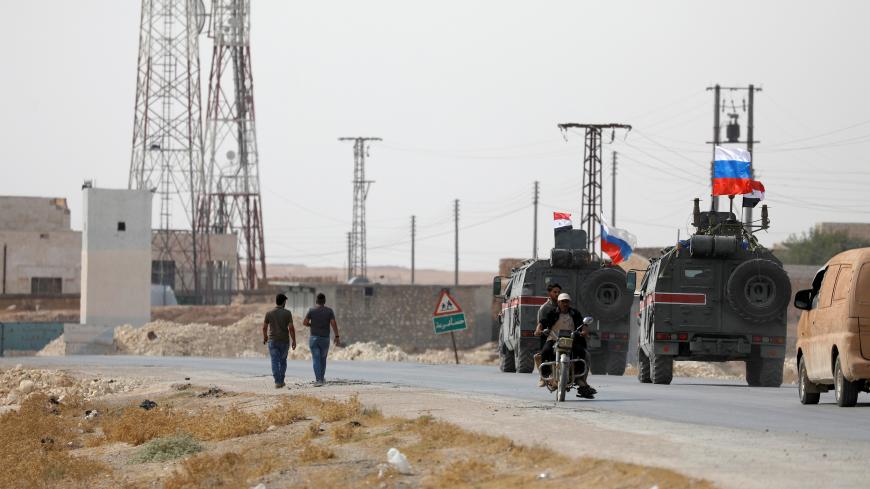 The escalation in Idlib has left Turkey vacillating between Russia’s tough options and the United States’ enticing prodding, as it maintains its menacing posture to force the Syrian army’s retreat to now-defunct cease-fire lines in the rebel stronghold. Amid the standoff, the Syrian Kurds are becoming a key factor in both US and Russian calculations to sway Turkey’s attitude.

The US administration is said to be considering options to back Turkey in a potential thrust in Idlib and, in a further move pleasing Ankara, has reportedly cautioned the Kurds to stay out of the conflict. Russia, for its part, appears to have unfolded the Kurdish card, albeit rather discreetly at this time, in a way that goes beyond reviving the dialogue between the Kurds and Damascus.

Until recently, the Kurds worried that Russia, in a bid to keep Turkey on its side in Syria, might allow it to take control of the Kurdish city of Kobani on the Turkish border in return for Turkish concessions in Idlib. In fact, this has been a fear recurring at each apparent progress in the Turkish-Russian partnership. Amid the recent head-spinning developments, however, the Kurds sense that the Russian door might open to them to an extent they have never imagined.

In general terms, the Kurdish position could be summarized as follows: The Kurds still place importance on their partnership with the United States on the ground, continue to consider Turkey’s military presence as a primary threat, and — while seeing Russia as the guarantor of any negotiations with Damascus — they keep in mind that Russia’s strategic interests might lead it to accommodate Turkey, as it did in 2018 when it acquiesced to Turkey taking over Afrin.

Yet the order of priorities in the Kurdish approach has changed since Turkey’s Operation Peace Spring in northeast Syria in October 2019. The notion that Damascus should be the address of settlement on the Kurdish issue has gained weight as a general strategic choice for the Kurdish-led self-administration in northern and eastern Syria. In late December, the Russians had a meeting with Kurdish representatives at Russia's Khmeimim air base, after which they arranged a meeting between the Kurdish team and Syrian government representatives in Damascus. The talks, in which intelligence chief Ali Mamlouk led the Syrian side, resulted in a deal to set up joint committees with a view of furthering negotiations down the road.

The straining of Russian-Turkish ties over Idlib has resulted in some undeclared changes in Kurdish tactical choices. According to Kurdish sources contacted by Al-Monitor, the Kurds are collaborating with the Syrian army in certain parts of the operations in northwest Aleppo, namely in areas along the boundaries of Afrin. An expansion of the offensive toward Afrin is likely to make the Kurdish participation more visible.

Standing out as two other potential fronts are Tel Rifaat, where the Kurdish People’s Protection Units (YPG) has redeployed after pulling out from Afrin in 2018, and Manbij, where Syrian and Russian troops have moved in since the withdrawal of US forces. To the east of the Euphrates, meanwhile, Ras al-Ain and Tell Abyad, which are controlled by the Turkish military and its ally, the Syrian National Army, as well as nearby Tel Tamer and Ain Issa, which lie on the M4 highway, are considered key areas to which potential clashes might spread. The said locations are already the scene of sporadic confrontations in the form of transient, controlled exchanges, but in the event of a direct face-off between the Syrian and Turkish militaries in Idlib, they are likely to turn into hot battlefields.

The joint Russian-Turkish patrols along the Turkish-Syrian border, which had stalled after the killing of Turkish soldiers in Idlib earlier this month, resumed Feb. 17, yet the Kurdish sources believe the Turkish-Russian arrangement reached in Sochi Oct. 22 after Turkey’s Operation Peace Spring has collapsed. The collapse of the deal would mean that Russia, a guarantor of the cease-fire, would stop acting as a brake holding up the Kurdish-led Syrian Democratic Forces and the Syrian military in the region. Still, making such a conclusion appears a bit premature at present.

Speaking of the Afrin front — which has been effectively opened with the Kurdish involvement — and other potential fronts, another curbing factor, namely the United States, is at play.

According to US sources, quoted by prominent Turkish journalist Murat Yetkin on his personal blog, the United States has made it clear to the YPG that they would not get US support if they fight the Turkish military. “A senior official stressed that YPG forces were ‘clearly and repeatedly’ told that the United States would not choose them over Turkey in case of a conflict,” Yetkin wrote Feb. 18.

The report quotes a senior US source as analyzing that Turkey’s October incursion, while opposed by Washington, seems to have accomplished two objectives, namely establishing Turkish military presence in northeast Syria, which is critical for future developments in Syria, and demonstrating that the United States would not protect the YPG against Turkey, even though Ankara was concerned and at least some in the YPG believed that the United States would do so.

Regarding the situation in Idlib, Yetkin summarizes the comments of US sources as follows: “US forces will not directly get involved in conflict [in Idlib]; that is our limit. But we will support Turkey in other areas, from advanced intelligence services to special equipment when needed.”

The journalist quotes the source as saying that Washington will not raise any objections if other NATO allies decide to assist Turkey by deploying Patriot batteries at the border to “ensure air cover.”

One of the sources notes that Turkey is capable of dispatching up to 45,000 troops to the region in a short period of time, stressing that “neither Syria nor Russia would be capable of that.” The source, however, adds that Washington does not expect Russia to strain ties with Turkey “too much” over Idlib, given “the strategic significance” of the relationship.

A Kurdish source contacted by Al-Monitor denied the Kurds had received any message to not expect US backing if they fight Turkey, but they are not ruling out such an eventuality. “The United States is against any alignment between the Kurds and Damascus. Saying that [the Kurds] should not fight Turkey amounts to saying that [the Kurds] should stay clear of Idlib,” the source noted.

Stressing that the situation remained fluid, the source said, “We are on a very fluctuant ground, where cooperation, contradiction and conflict between the United States and Turkey, between Turkey and Russia and between Russia and the United States are going on simultaneously. So, we are unable to speak in definitive terms. Still, we can emphasize this: Russia’s role as mediator and guarantor has become more prominent [for the Kurds] after the US attitude in the face of Turkey’s invasion [in October].”

According to the source, the deepening of the Turkish-Russian rift is significant for the Kurds in the sense that it could lead Russia to take the Kurds into account more prominently and result in a solution mechanism on the Kurdish question. “If the conflict in Idlib grows, the Russians are likely to open the Kurdish card. In fact, we can say they have already opened it to some extent,” the source said.

Nevertheless, the Kurds believe it is still premature to declare a clear position, not ruling out the possibility that the Russians might eventually lack the resolve to go into a full-fledged face-off with Turkey. Of note, while reaching out to the Kurds on the one side, the Russians are trying to rouse Turkey’s sensitivities on the Kurds on the other. In a Feb. 18 statement, for instance, Russia said the United States had moved more than 300 truckloads of weapons from Iraq to northeast Syria this year, with the weapons being “used against Turkish troops” in the region. In other words, the “dual usability” of the Kurdish card is another reason why the Kurds are blowing on cold water.