A Turkish delegation arrives in Washington to find a way forward for US-Turkish relations. 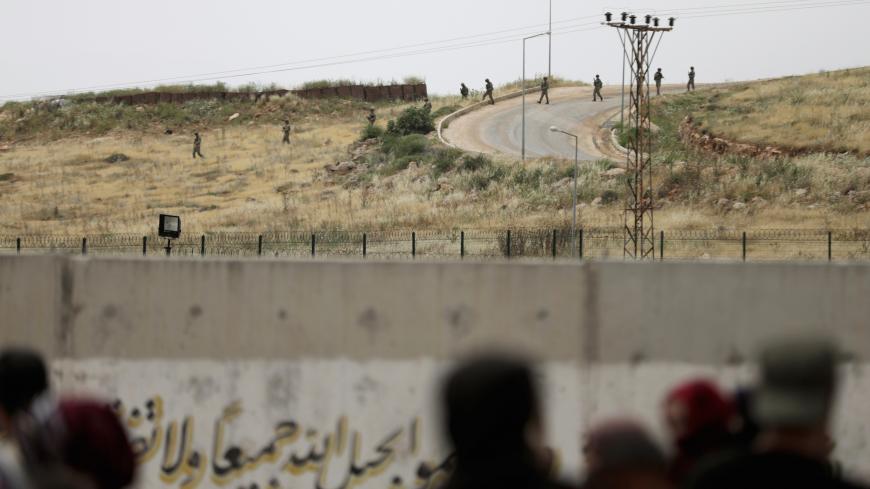 Turkish soldiers walk at the Atmeh crossing on the Syrian-Turkish border, as seen from the Syrian side, in Idlib governorate, Syria, May 31, 2019. - REUTERS/Khalil Ashawi

WASHINGTON — As Russian-Turkish relations have been strained over the Moscow-backed Syrian offensive in Idlib that has killed a dozen Turkish soldiers and sent 800,000 Syrians fleeing toward the Turkish border since December, both Turkey and the United States have looked for opportunities to improve ties.

A delegation of Turkish parliamentarians visited Washington this week to meet with US lawmakers, journalists and experts, and express hopes that the allies of 70 years could get past congressional threats to impose sanctions for Turkey’s purchase of the Russian S-400 air defense system and invasion into northeastern Syria last fall to push Syrian Kurdish forces away from its border.

“'No’ is never an answer in diplomacy,” Volkan Bozkir, the chairman of the Turkish parliament’s Foreign Affairs Committee and member of the ruling Justice and Development Party (AKP) leading the six-member delegation, told journalists at a briefing at the Turkish Embassy Feb. 12.

“Everything is negotiable,” the former Turkish diplomat said.

The Turkish parliamentary delegation visit to Washington came as the top US Syria envoy, James Jeffrey, visited Ankara and gave an upbeat assessment of US-Turkish alignment of views on both Syria and Libya.

“We have very close geostrategic objectives with Turkey in the two areas where you have forces committed right now. In Libya and in Syria,” Jeffrey told Turkey’s NTV in an interview Feb. 12. “I don’t want to get into the details of some of these conversations because we are still at a point before further decisions might be taken, but we have, first of all, a very close analysis of the situation between the Turkish side and the American side of what the problems are.”

“We’re committed to continuing close coordination, and information exchange to be helpful,” Jeffrey continued. “We are both very concerned about the role of Russia in Libya and in Syria in general and in the Idlib offensive. We have made it clear to our Russian counterparts that this activity is unacceptable.”

The Turkish parliamentarians praised the words of support from Washington for Turkey amid the Idlib offensive and Washington’s condemnation of the Syrian offensive and Russia’s failure to restrain it.

They also argued against the possible congressional triggering of sanctions, including under the 2017 Countering America’s Adversaries Through Sanctions Act (CAATSA). They noted that the Trump administration itself has argued against sanctions legislation proposed by the chairman of the Senate Foreign Relations Committee, Jim Risch, R-Idaho, and ranking Democrat Bob Menendez of New Jersey in a seven-page document sent by the State Department to US lawmakers in December, first published by the Daily Beast.

“Trump is the firewall for them, the only one who isn’t ready to sanction them,” Aaron Stein, a Turkey expert who heads the Middle East program at the Foreign Policy Research Institute, told Al-Monitor, referring to Turkey.

“It’s nebulous,” Stein mused, on when the CAATSA sanctions might be triggered. “Trump needs to implement it. The next crisis point will be in April, when the S-400 in Turkey is activated.”

Democrats on Capitol Hill said the reprieve is temporary.

“We have been recently discussing how to refocus Congress’ attention on S-400 sanctions,” a Democratic congressional aide, speaking not for attribution, told Al-Monitor. “It is one of the few spots where we are all in lockstep. … There is plenty of will to push the administration and shame them into doing the right thing.”

But another former Democratic congressional aide said it was his sense that Senate Majority Leader Mitch McConnell may prevent the sanctions bills from coming to the floor.

The Turkish lawmakers may be visiting at a particularly opportune moment, but Congress is unlikely to be permanently charmed off-course from its deep concerns with Turkey’s trajectory, said Aykan Erdemir, a former Turkish opposition parliamentarian who heads the Turkey program at the Foundation for Defense of Democracies.

“The Turkish government sees this as a moment when they might have a friendlier ear in Washington,” Erdemir told Al-Monitor. “This also gives them a better opportunity to make the case against CAATSA sanctions and the potential fines and the [Southern District of New York] court case against the Turkish public lender Halkbank. In 2020, avoiding CAATSA sanctions and Halkbank fines tops [Turkish President Recep Tayyip] Erdogan’s agenda.”

“Erdogan knows that he can enjoy good one-on-one rapport with [US President Donald] Trump, who shares his transactional approach to foreign policy,” Erdemir continued. “But with Congress, Erdogan knows that he has to reach out on multiple fronts. Hence, the Turkish government has been spending millions on an army of lobbyists, but this blitz doesn’t appear to have succeeded in burnishing Erdogan’s tarnished image.”

“At this point, Trump’s strategy will be twofold: If he is forced to issue CAATSA sanctions against Ankara, he will take this as slow as possible and select the lightest sanctions on the menu,” Erdemir suggested.

Given the current tensions in Turkish-Russian relations, “it is quite natural for Washington to see this as a unique opportunity to bring Turkey back into the fold of the trans-Atlantic alliance,” Erdemir said. But he was pessimistic that the US effort to pull Turkey closer would succeed.

“Erdogan’s Turkey has pivoted so far away from the US — not only from the trans-Atlantic alliance but also its values, especially parliamentary democracy, human rights and rule of law — that it is extremely difficult to pivot back,” he said. “Rebuilding a liberal democratic order in Turkey is mission impossible … Erdogan’s Turkey can fit in a purely military alliance, but not a political one that enshrines democratic values. At this point, the Erdogan government only has a welcoming home among the authoritarian bloc of countries.”

And for now, at least, a friendly ear and open door with Trump, who has also shown a predilection for the belief that everything is negotiable, for a price.