Raqqa seeks to repair what IS ruined

The Religious Affairs Foundation in Raqqa held its first Islamic forum as part of efforts to correct the religious concepts that the Islamic State misinterpreted and practiced, in an attempt to bridge the gap that IS created among the Syrian communities. 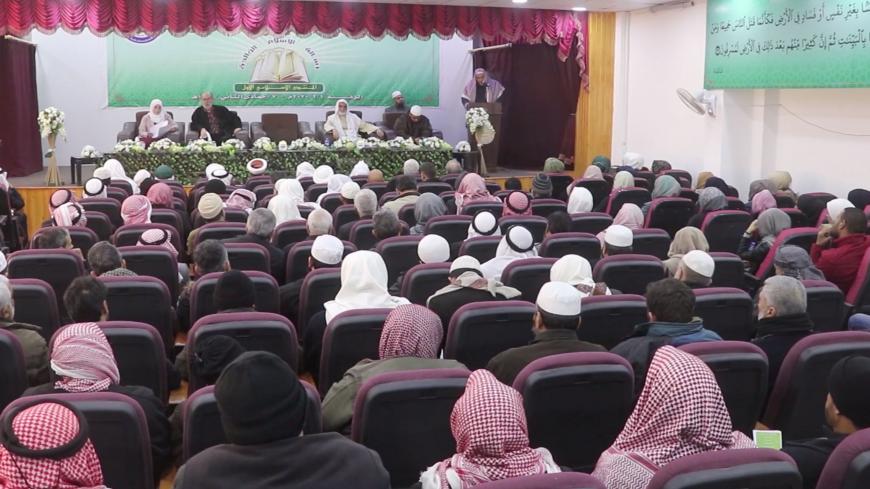 RAQQA, Syria — Since the city of Raqqa was freed from the Islamic State (IS) in October 2017, the Religious Affairs Foundation in Raqqa held its first Islamic forum in the city. The conference — titled, "The eternal message of Islam: concepts and challenges" — attracted 140 representatives of religious institutions from the various northern and eastern parts of Syria, members of the Raqqa Civil Council, Raqqa tribal elders, representatives of the Syrian Democratic Forces and officials at the Autonomous Administration of North and East Syria (Rojava).

On the first day of the event, on Feb. 1, Sheikh Anas al-Hamad, a member of the Religious Affairs Foundation, said that the forum’s goal is to rectify the religious path of Islam that IS in Raqqa misinterpreted, to counter IS extremist ideas that mushroomed among some of the youth segments that were influenced by IS ideology, to turn the mosques into places to disseminate peace and charity, and grant the rights that IS denied to women and advance their status.

Commenting on the forum’s axes, Sheikh Hassan Ziad, also a member of the foundation, told Al-Monitor, “Our discussions focused, among other things, on the role of religious scholars in spreading the true [teaching] of Islam and shedding light on [the Islamic teachings] that IS misinterpreted, especially when it comes to demonstrating respect for the rights of other religious communities in the region.”

He added, “IS perceived [these communities] as infidel, executed Raqqa’s Christians, and captivated and enslaved Christian women. The forum called to renounce violence and grant women their rights in accordance with Sharia.”

Aram Zaven, an Armenian from Raqqa, told Al-Monitor that IS killed his father because he refused to convert to Islam while the group was controlling the city. “Islam stipulates that there is no compulsion in religion. IS, however, forced the adherents of the other religious communities to abandon their religion and convert to Islam.” Zaven, who currently resides in the city of Hasakah, added, “IS killed those who refused to convert, including my father five years ago,” he said.

Aziza Khanafer, co-chair of the Religions and Beliefs Office at the Autonomous Administration of North and East Syria, told Al-Monitor that while women are dignified in Islam, IS violated their rights. “IS leaders would force women into five, six or seven marriages and divorces on the same day, disregarding the Iddah rule [waiting period] for divorced women and the Quran. This is based on published reports on IS radical teaching and as testified by the residents of Raqqa and Deir ez-zor who lived under IS occupation,” she said.

Ghaida Salem, a clothing vendor in Raqqa, told Al-Monitor that women were forced into marriages with IS fighters, saying that the husband of her sister, 20-year-old Reem, joined IS ranks and was killed in the battles against the Kurds in al-Tabqah. She said, “Two days after he was killed, the IS religious female police — known as the hesba — forced my sister to move to a madafa [a guesthouse for IS widows and non-Syrian women who joined IS], which are numerous in the city. The following week, [the hesba] forced her into marriage with another IS fighter without taking into account the Iddah rule that Muslim widows are required to abide by.”

Haifa Naeimi, a mother of three girls, told Al-Monitor that IS accused her cousin Noura of apostasy and forced her into marriage with six of its gunmen on the same day. Naeimi who resides in Raqqa said, “Every time she would get divorced by an IS judge who would then get her married to another [fighter] — contrary to Sharia law. Noura committed suicide five months before the city was liberated.”

Head of the Religious Affairs Foundation Ali Nayef al-Shuaib told Al-Monitor that the two-day conference concluded its work with outputs to be applied in the lectures and forums involving the various social segments in Raqqa. He said that the committee established following the conference will organize these lectures and forums in the near future, with the goal of bridging the gap IS created among the people of Raqqa. “IS managed to distort the image of Islam. In turn, as clerics we will seek to repractice the principles of true Islam and close the gap that IS created with the other religious communities in Syria.”

In his closing statement on the last day of the conference, on Feb. 2, Shuaib called for respecting religious symbols and venerated figures of the various Syrian components, as well as their religious values. He also called for upholding the unity of the Syrian community; promoting the values of charity, equality and peace among fellow countrymen; and renouncing and fighting against extremist ideas.