Despite the public's ire, the Palestinian Authority has been meeting with members of the Israeli media and the sympathetic left to boost Israeli opposition to the US peace plan ahead of the March 2 Knesset elections. 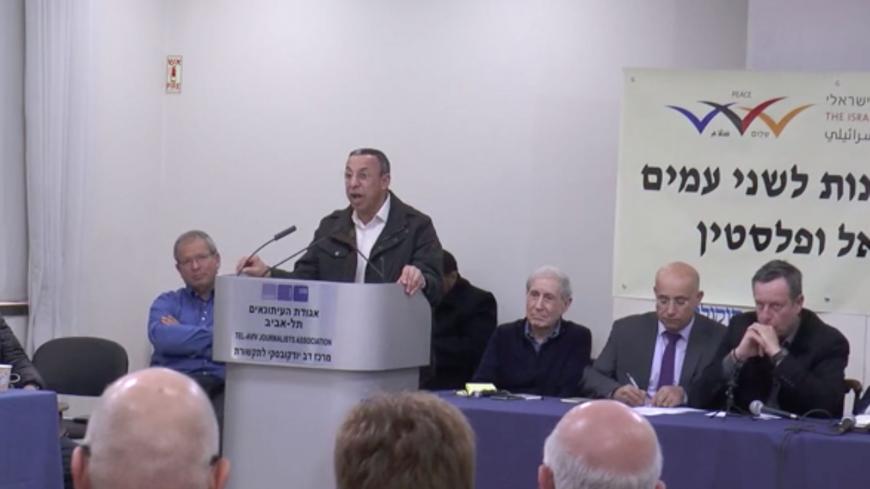 People take part in a meeting of former Knesset members, other Israeli political figures, members of the PLO’s Committee for Interaction with Israeli Society and other Palestinian political figures, Tel Aviv, Israel, as seen in a still from a video recorded Feb. 14, 2020. - Bokra.net

RAMALLAH, West Bank — The Palestinian Authority (PA) recently intensified its meetings with Israeli journalists, former lawmakers, political party members and academics in an attempt to gain their cooperation and to explain Palestinians' broad rejection of the US Mideast peace plan. But these gatherings aren't sitting well with the public.

Coordinated by the PLO’s Committee for Interaction with Israeli Society, a series of meetings began Feb. 2, bringing together an Israeli academic delegation and a member of Fatah’s Central Committee, Jibril Rajoub, in Ramallah. Since then, several more meetings have been held. On Feb. 14, former Knesset members, Israeli political figures, Palestinian representatives and members of the interaction committee met in Tel Aviv.

On Feb. 16, an Israeli delegation of 100 people, including journalists, visited Ramallah to meet with a number of top-level Palestinian political and religious officials. The next day, another delegation visited; this one involved columnists, analysts and political correspondents in the Israeli media.

The meetings sparked great anger in the Palestinian public. Palestinian factions condemned the gatherings and demanded they be halted, while dozens of Palestinians took to the streets of Ramallah on Feb. 17 demanding the suspension of “normalization meetings.” Students at Birzeit University in the central West Bank organized a sit-in at the school Feb. 17 to protest the participation of a member of the university’s board of trustees in the Tel Aviv meeting. Also on Feb. 17, unknown youths threw a Molotov cocktail at the restaurant that hosted the meeting between Palestinian and Israeli figures.

Even the boycott, divestment and sanctions (BDS) movement attacked the meetings and the PLO interaction committee’s work.

“What the committee is doing is free normalization that harms our struggle in the boycott of Israel," Mahmoud Nawajaa, the Palestinian BDS National Committee general coordinator, told Al-Monitor. “All assertions that these meetings are part of confronting the peace plan are false." Rather, the meetings "reflect the state of defeat and surrender [of participants] and harms the efforts of the boycott movements to isolate the occupation and its colonial regimes.”

Nawajaa added, “Rejecting the peace plan can't happen by befriending or begging the Israelis, but rather by taking practical measures to achieve national unity.”

The PA’s intense surge toward Israeli society reflects President Mahmoud Abbas' vision of establishing his influence in Israel, to recruit Israeli voices and positions in favor of a political settlement, a return to negotiations and a rejection of the US plan.

PLO interaction committee member Ashraf al-Ajrami told Al-Monitor, “The Palestinian cause faces challenges, represented by the peace plan and Israel’s threats to annex the West Bank, so the Israeli and Jewish voice rejecting these plans is important in recruiting public opinion in Israel, Europe and the US to support our rights."

The committee also wants to influence Israeli society because Israeli elections are to be held March 2. “Any political movement in Israel against the government will indirectly affect the elections,” Ajrami said.

Addressing whether the meetings have included discussions on the necessity of toppling Netanyahu in the elections, Ajrami said, “We discussed the need to reject the peace plan and return to negotiations ... and that the US cannot be a single mediator in the peace process. The Israelis said that this can't happen under the Netanyahu government and a change must be made in Israel.”

Although the committee has been active for eight years now, critics say its impact has been negligible. But Ajrami challenged that perception. “There is a great weakness in the camp of supporters of the political settlement and the left camp in Israel, and we are trying to strengthen this voice," he said.

He added, "We have reached a large number of Israelis and were able to influence them, even though they are a minority, but the percentage of Israelis supporting the Palestinian position increased over the years thanks to the committee’s work. We were able to reach the Israeli media, universities and high schools,” he said.

Meanwhile, the PA insists on holding meetings with the Israelis and considers these gatherings part of the political struggle. But opponents say that the PA, by ignoring the public's and factions' rejection of the collaboration, is creating a new Palestinian division that will harm attempts to confront the peace plan.