Egypt treads cautiously in response to Trump's deal of the century

Egypt is caught between a rock and a hard place in supporting Palestinians and not rejecting the US peace plan, being careful to sustain good ties with the United States. 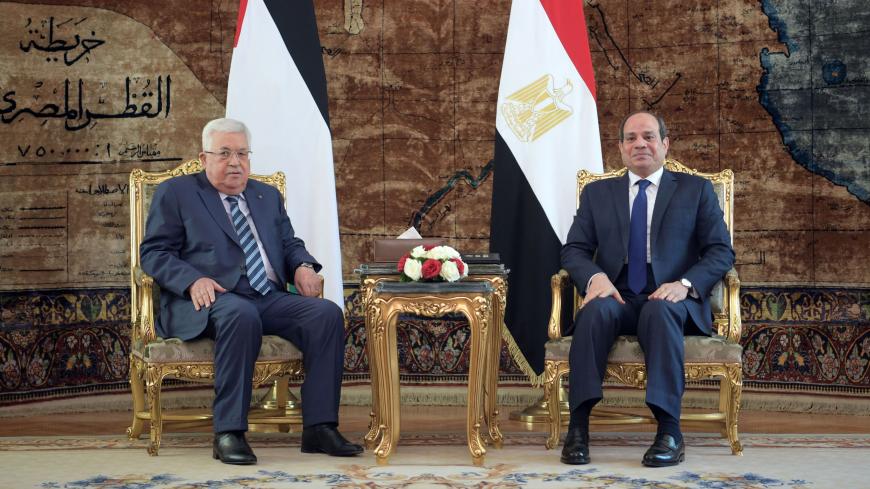 CAIRO — Following President Donald Trump’s rollout Jan. 28 of the US peace plan known as the deal of the century, Cairo has geared up to join the ensuing negotiations and talks.

During the meeting, Sisi confidently stressed Egypt’s support of the Palestinian issue and of the establishment of an independent state in the occupied Palestinian territories as per international legitimacy. Sisi said there is no alternative to direct negotiations between the parties to the conflict in order to reach a settlement.

In turn, Abbas expressed his appreciation of Egypt’s sincere efforts and endeavors in supporting the Palestinian issue, praising Cairo’s historical and unchanging role in this direction.

In a meeting of the Palestinian leadership in Ramallah Jan. 28, following the announcement of Washington’s deal, Abbas announced his rejection of the plan, calling it the “slap of the century,” saying he refuses to take part in any negotiations that are based on it.

In the same vein, during its emergency meeting of Arab foreign ministers in Cairo Feb. 1, the Arab League also rejected Trump’s deal, stating “it will not lead to a just peace agreement.”

“Palestinians reject the current situation because it does not fulfill their aspirations and effectively places them under occupation,” Arab League Secretary-General Ahmed Aboul Gheit said.

In a Jan. 28 statement, the Egyptian Foreign Ministry called on Palestinians and Israelis to carefully consider the US plan to achieve peace and open channels of dialogue so as to resume negotiations under US auspices, in a bid to reach an agreement that would live up to the aspirations and hopes of both sides.

Egypt’s first response to the deal seemed somehow contradictory to its official stance on the Palestinian struggle.

“Cairo did not explicitly call for negotiations on the basis of the deal of the century, but rather for a careful study of the plan followed by direct negotiations. The presidential statement and the foreign minister’s speech at the Arab League clearly show that any negotiations called upon by Egypt should be based on an Arab vision and according to international legitimacy,” Ahmad Youssef Ahmad, a professor of politics at Cairo University and former dean of the Institute of Arab Research and Studies, told Al-Monitor.

Shoukry insisted on the need to establish peace and reach a settlement that would restore all the legitimate rights of the Palestinian people through the establishment of an independent Palestinian state with East Jerusalem as its capital.

“The first statement of the Egyptian Foreign Ministry was kind of confusing and incomplete as it failed to stress the right of the Palestinian people to establish an independent Palestinian state with East Jerusalem as its capital. It did not clearly reject the US deal but rather called on both sides to carefully study it and later engage in direct negotiations. This is not a problem because negotiations have always been Egypt’s approach to the issue. But the statement that was disclosed to the public did not stress Egypt’s stance on the need to establish an independent state of Palestine with East Jerusalem as its capital,” Ahmad explained.

Rakha Hassan, a member of the Egyptian Council for Foreign Affairs, told Al-Monitor via phone that “Shoukry’s speech at the Arab League meeting, in which he affirmed the right of the Palestinian people to establish an independent state, is more reflective of the official Egyptian position on the Palestinian issue than the previous Egyptian statement that was issued right after the announcement of the deal of the century.”

“The position of Egypt, Jordan, Syria and Lebanon on the Palestinian issue has a security association, given that Israel is an expansionist state located on the borders of these countries,” he added.

Hassan explained that said countries are preoccupied with their internal and domestic struggles, which caused them to be less invested in the Palestinian issue as a priority matter in the past recent period, allowing other countries such as the United States to have a bigger role to this effect.

During its meeting Feb. 3 in Jeddah, the Organization of Islamic Cooperation announced its total rejection of Washington’s peace plan, which Palestinians consider to be aimed at denying all their legitimate rights and ending their cause.

Tariq Fahmy, a professor of politics at Cairo University, told Al-Monitor that “Egypt’s stance on the deal of the century is very important and the meeting between Sisi and Abbas was good … Cairo relayed the message that it will stand by the Palestinian negotiators before the United Nations.”

Fahmy said Jordan and Egypt share the same stance on the Palestinian issue and Palestinians need Cairo’s experience when it comes to negotiations, suggesting the need for an Arab peace plan to be negotiated as an alternative to the US deal.

Egypt plays a vital role in supporting the Palestinian cause and sponsoring the Palestinian talks, which have been held repeatedly in Cairo since November 2002, in a bid to achieve reconciliation between the Palestinian factions. This is in addition to Egypt’s financial and humanitarian support for Palestinians, according to the Egypt State Information Service.

Meanwhile, Mustafa Kamel al-Sayed, a professor at the American University in Cairo, told Al-Monitor that Egypt did not reject Trump’s plan outright because it attaches major importance to its relations with the United States, especially since the latter has played a major role in mediating with Ethiopia to solve the Renaissance Dam issue.

“The Egyptian government did not object to the US plan, but in its Foreign Ministry’s statement it called on both sides of the conflict to study it carefully,” he added.