Despite divisions in wake of Trump’s plan, Israelis & Palestinians labor for peace

Israeli and Palestinian peace activists are worried over increased anti-normalization sentiments across the Palestinian Authority. 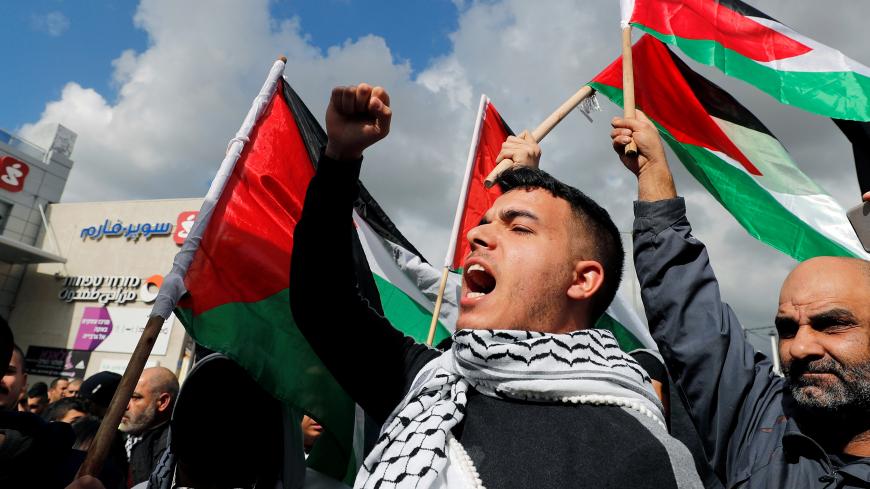 The meeting that took place Feb. 14 between former Knesset members active in the “Peace Parliament” and senior Palestinian officials was initiated by the PLO Committee for Interaction with the Israeli Society. All in all, the mood was friendly and positive. The main messages to come out of this meeting were the rejection of US President Donald Trump's peace plan and a commitment to work for genuine peace between the two parties. The meeting made headlines in the Palestinian media, but when the Palestinian participants went home, they discovered that they were the victims of serious attacks both on social networks and in traditional media.

One of the participants at this meeting was the mayor of the town of Anabta (just east of Tulkarm), Hamdallah Hamdallah. He originally posted about the encounter on social media, but was forced to remove what he had written and went so far as to announce that he was resigning from his position and leaving the Interaction Committee. Even after Hamdallah explained that he was invited to participate in the meeting by the Fatah organization, headed by Palestinian President Mahmoud Abbas, the Palestinian public was reluctant to accept his justification.

This was not the first time something like this happened, nor was it an isolated incident. It was reported that same week that a restaurant in Ramallah was attacked by a Molotov cocktail shortly after hosting Israeli journalists at the invitation of the Interaction Committee. Similarly, an organization named Sulha (Reconciliation) was forced to postpone a meeting between Israelis and Palestinians scheduled for Feb. 20, due to threats received by the Palestinian organizer.

All of this raises two major questions: Is the emerging escalating situation in the West Bank making it more difficult for Israeli peace groups working to resolve the conflict and foster continued dialogue with the Palestinians? And if so, how can they continue their struggle for peace, when someone on the other side of the divide is constantly trying to harm Palestinians, who agree to meet with Israelis?

Former Knesset member Mossi Raz (Meretz, now No. 14 on the Labor-Gesher-Meretz list) is a veteran peace activist, who attended the last meeting of the “Peace Parliament" in Tel Aviv. He told Al-Monitor that he does not regard encounters like that to be an example of normalizing the relationship between Israel and the Palestinians. “I don’t live under occupation, so I can’t give the Palestinians grades on this,” he said. “It is frustrating that there are people on the Palestinian side who use violence against peace advocates. I disagree with them, but I also understand where they are coming from. By the way, this trend has been going on for 10 years now. It is important to realize that activities engaged in by the 'Peace Parliament,' which are intended to advance an arrangement based on ending the occupation, are not the same as normalization. It is not some meeting intended to bring people closer together or to celebrate some festive occasion together. It is joint political activism with a single objective.”

This is echoed by Shaked Morag, director general of Peace Now. She also distinguishes between normalization and joint activities to end the occupation and resolve the Palestinian-Israeli conflict. “I think that the Palestinians know how to distinguish between Israeli peace activists, who understand and are sensitive, and who fight for Palestinian rights based on the recognition of their national identity, and all the others,” she told Al-Monitor. “Having ties with Peace Now is not normalization, because we support change to the existing situation, rather than preservation." She also said that when Peace Now representatives paid a visit to Ramallah after the release of the Trump plan, they did not encounter any opposition or threats. “I have never encountered a Palestinian who refused to meet with me about this. I believe that we must continue working together toward our common objective,” Morag added.

Gadi Baltiansky, general manager of the Geneva Initiative, told Al-Monitor that despite the harsh atmosphere after the release of the Trump initiative, his organization will continue to hold encounters between Israelis and Palestinians. “The rise in the level of anti-normalization rhetoric influences peace organizations in Israel in two ways,” he said. “While this does not mean that activities will be canceled, it does impact their timing and the opportunity to publicize them so as to draw media attention to the very fact that such meetings are being held. Given the current situation, Palestinian organizers have asked us not to release information about the meetings. Nevertheless, we continue with our activities, so that recently a group of Israeli artists met with [Fatah senior] Jibril Rajoub. I believe that as long as the Abbas leadership still backs these encounters, they will continue to take place, even though the mood does not help these meetings reach their full potential.”

Not many people in Israel know what is really happening in the West Bank or how Palestinian society is changing. The people who are most worried about this growing opposition to normalization are Israeli journalists covering Palestinian affairs. They have been reporting for a while that the rejection of any contact with Israelis has become the new normal. A veteran journalist, who has covered the Palestinian territories for the past two decades, told Al-Monitor on condition of anonymity, “The mood is very difficult. Hostility is growing, as is the rejection of any contact with Israelis.” He said that even senior officials in the Palestinian Authority refuse to give interviews to Israeli television out of fear of being ostracized and shamed. On the other hand, it is the Palestinian leadership that created and runs the Committee for Interaction with the Israeli Society. Over the last few years, the committee has organized dozens of encounters between Palestinians and Israelis, who immigrated to the country from the Arab states and Russia, as well as cultural figures and peace activists. In 2013, for example, a huge encounter took place in Ramallah, in which hundreds of Israeli students met with Abbas. The event was sponsored by the Knesset’s Lobby to End the Conflict.

Israelis see such encounters as an important bond, which validates efforts to achieve peace. It can be argued that because these meetings are held — despite the ire of critics on the right — there really is a partner on the Palestinian side, even if a solution to the conflict does not appear on the horizon. After all, it is important to maintain contact with the other side, even in times of crisis. As far as many Palestinians are concerned, however, joint events and encounters with Israelis represent something entirely different, especially now. They validate the occupation and the normalization of relations with Israel. It seems as if as long as diplomatic negotiations were underway, and there was hope for real progress toward a solution to the conflict, encounters such as these had greater legitimacy. But when Trump revealed his peace plan in the presence of just one of the sides, and the Israeli prime minister standing beside him sees it as a green light to begin the unilateral annexation of West Bank territories, anti-normalization activists get considerable momentum for their efforts.

Meanwhile, the Israeli peace camp continues with its mission as usual. Encounters that were planned are being held, even if it is sometimes necessary to reschedule them or avoid publicizing them in the media. After all, this is not the first wave of opposition to normalization. Attacks against Palestinian peace activists have happened in the past as well. If, however, the anti-normalization trend intensifies, it will become necessary to come up with a new strategy appropriate to the situation on the ground, which is becoming more hostile and less stable with every passing day.