The leaders of Hamas have indicated that the time for waiting is over as pressure continues to build in Gaza, leaving Israel to have to choose between the risk of war and its unknown consequences and finally reaching a long-term arrangement with the movement. 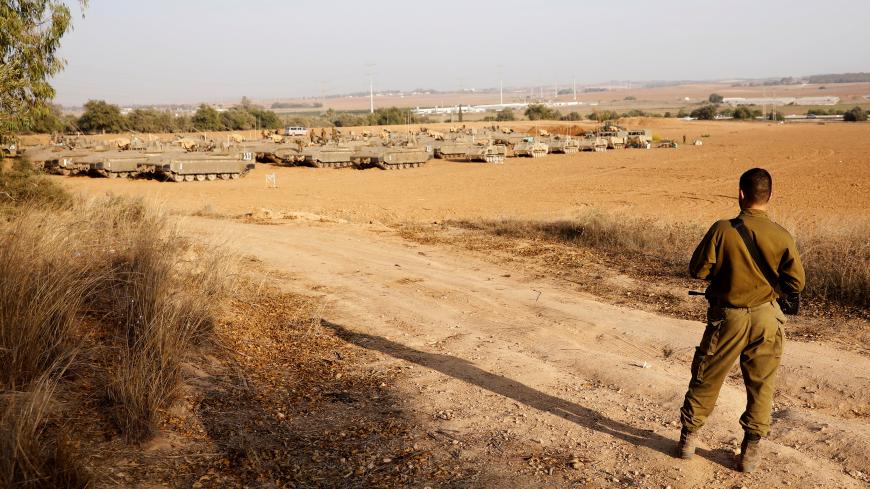 An Egyptian delegation arrived in Gaza Feb. 10 for a meeting with Hamas' leadership. Heading the delegation was Gen. Ayman Badia, deputy head of Egyptian Intelligence, and among the participants was Ahmad Abu Halaq, who holds the Palestinian portfolio at the same branch. It was their first meeting with the Hamas leadership since a crisis erupted between the two parties after Hamas political bureau chief Ismail Haniyeh attended the funeral of Gen. Qasem Soleimani in Iran last month against Cairo's wishes. Haniyeh has not yet returned to Gaza, and it is unknown when the Egyptians will let him reenter.

The meeting took place in the office of Yahya Sinwar, Hamas' leader in Gaza, but Sinwar did not attend. According to reports from Gaza, the movement’s most senior political and military officials are worried about possible Israeli assassination attempts. In Israel that same day at an assessment by the Israel Defense Forces' Gaza Division, Defense Minister Naftali Bennett said, “The haphazard behavior of the Hamas leadership brings us closer to taking lethal action against them.… No one will be immune.” Hamas leaders took his words to be a threat against their lives in response to ongoing rocket fire into Israel.

On Feb. 9, the Egyptian delegation had held a round of talks with the heads of the Israeli defense establishment, including Shin Bet Director Nadav Argaman, Meir Ben Shabbat, head of the National Security Council, and Maj. Gen. Kamil Abu Rokon, commander of Coordination of Government Activities in the Territories. According to an Al-Akhbar report, the Egyptian delegation handed Hamas a message from Netanyahu, warning that if it failed to immediately stop the firing of rockets and release of incendiary balloons from the enclave, Israel would strike a harsh blow against Gaza, an action that would receive the backing of the United States and Europe. It was also reported that the Hamas representatives responded to the Egyptians, “There will be no calm in exchange for nothing,” as long as Israel continues to take its time implementing the understandings. According to them, the economic situation and the failure to implement the understandings already reached in exchange for calm along the border will lead to even greater pressure in Gaza. Any “foolish” act by Israel, to use Hamas' term, including the assassination of senior leaders of the various Palestinian factions in Gaza, would set off “a major conflict.”

The threats by Netanyahu and Bennett did not fall on deaf ears. They were actually taken with the requisite seriousness by Hamas, as evidenced by Sinwar going into hiding rather than meeting with the Egyptian delegation. On the other hand, however, the movement's leaders remain willing to take some risks. Anyone in Israel who thinks that Hamas will heed the ominous Israeli message delivered via Egypt and take steps to restore order in Gaza is sadly mistaken.

Hamas considers the very act of meeting with the Egyptian delegation to be an important achievement. The disconnect between Hamas and Israel and Egypt had created a sense among the movement’s leaders that the possibility of reaching an arrangement with Israel was no longer on the agenda and that Israel was walking back the understandings it had reached with Hamas over the last year. Furthermore, Egypt had imposed sanctions of its own on Gaza, for example raising the cost of cooking gas, and had been making it more difficult for Palestinians hoping to pass through the Rafah border crossing.

As usual with Hamas, when pressure intensifies and fear of unrest among Gaza residents becomes all the more palpable, the only thing to do is heat up the front with Israel, something it would never dare do that along the Egyptian border. The movement's leaders are convinced that this tactic has proved its worth time and again. In fact, it worked this time as well: It took rockets and incendiary balloons for Israel to realize that the humanitarian situation in Gaza is intolerable, and that if it didn't take steps to ease the pressure on Hamas, another war was all but inevitable. On the other hand, there is still a vast gap between Israel recognizing the seriousness of the situation and acting. Even with the heads of Israel's defense establishment, including Bennett, realizing that the situation in Gaza is intolerable, and Hamas, playing with fire, signaling that it does not have the patience to wait until after Israeli elections in March, what will the Israelis actually do with these messages?

Despite Israel’s determined, even ominous messages from Netanyahu and Bennett, Hamas made it clear to the Egyptians that although they don’t want an escalation, they will risk it if they feel they have no other choice. The exact message that Hamas wanted to convey to the Egyptians was that the days of waiting are over. Furthermore, as I wrote Feb. 7 in Al-Monitor, leadership elections by the Shura Council have already begun, and none of the candidates wants to be portrayed as having given up on the campaign against Israel without having made a significant achievement, whether it be an arrangement or relief from the blockade. Anyone familiar with the way Hamas has acted over the past few years would know that there will be no cease-fire if they get nothing else of value in return.

Israel has been dealing with a political crisis for a year now, and as a result, the country’s political leadership has avoided making critical decisions and is incapable of providing appropriate responses. For the moment, the current government has no clear policy about what to do on Gaza, so any threats by Netanyahu and Bennett are effectively meaningless. They may be able to procure a degree of quiet for a week or at most until the March 2 elections, but even that is based on the assumption that the Egyptian delegation was able to convince Hamas to have a little more patience. That would entail something along the lines of, “If it remains quiet for a week, the supply of cement to Gaza will be renewed.” Once the elections are over, however, Israel will need to immediately decide whether it wants a war in Gaza, which could result in the possible toppling of Hamas and the occupation of Gaza. The claim of having international support for such a broad operation would not pass the reality test once the number of civilian casualties rises, and TV networks begin broadcasting gruesome images of the dead and wounded from Gaza.

After constantly postponing an effort to resolve the problem of Gaza, Israel finds itself caught in it. There is no middle road. There is no escape route either. All that is left are two possibilities, and each one entails a serious risk. The first option is war. The risk involved is clear, but the cost is unknown. Based on the experience of Operation Protective Edge (2014), it would also not ensure a solution. It would only postpone one at best and cause additional problems for Israel, which is enjoying an improvement in its international standing, with the establishment of ties with several Arab states. The other option is to reach a long-term arrangement. Israel has postponed making a real decision on this for more than 12 years now, believing instead that a sustained blockade would teach Hamas a lesson. That hasn’t happened. Now it must decide, and in the end, pay the price for one of them.