A narrow government should not be the default plan of Blue and White party leader Benny Gantz, but a first choice and his best strategy for change. 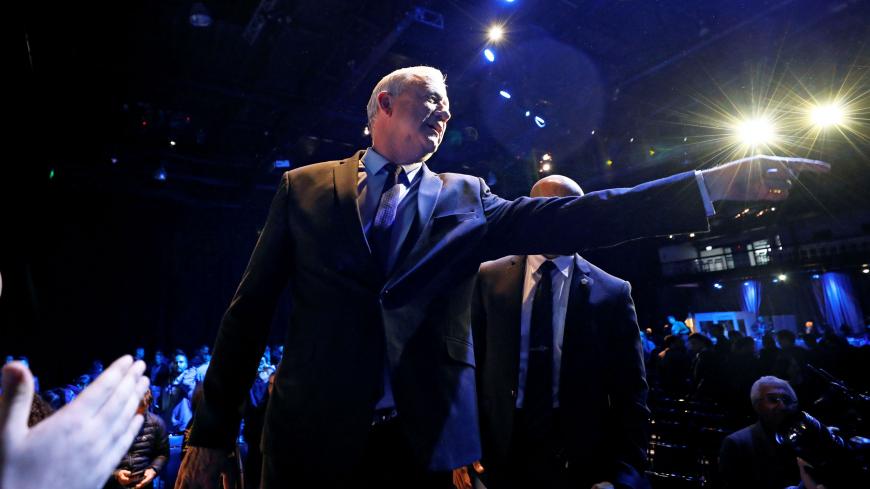 Leader of Blue and White party Benny Gantz takes part in a party rally, as he campaigns ahead of the upcoming elections, Tel Aviv, Israel, Feb. 17, 2020. - REUTERS/Amir Cohen

Israel’s third round of elections should provide the country with a normal government and spare it a convoluted and expensive veto-based coalition, incapable of making any important decisions. Prime Minister Benjamin Netanyahu will be participating in the election while under indictment and without immunity, while preparing for his first court hearing, scheduled for two weeks and a day (March 17) after voters decide his fate at the ballot box. If he decides to resign and if some other politician replaces him as head of the Likud, a national unity government could be formed immediately. But this is not likely to happen. Netanyahu will not resign and his party will not depose him, while the Blue and White party cannot form a government or join a coalition with Netanyahu in his current state. His legal situation would prevent him from serving as a minister during the rotation period in which Benny Gantz is prime minister — because, according to Israeli law and court rulings, a minister must resign once he is indicted, whereas a prime minister is only required to resign once he is convicted peremptorily. Furthermore, it is unlikely that Gantz would agree to serve under a prime minister who is required to show up in court every day.

While the message of the Blue and White party — which has focused on a national unity government ever since it was first formed — could switch to support for a national unity government without Netanyahu, that doesn’t seem to be a real option right now. Even Yisrael Beitenu leader Avigdor Liberman — with all his talk about a secular, liberal unity government — realizes that there will be no such thing as long as Netanyahu is a part of it, so he has been making do with all sorts of new terms and conditions (such as his refusal to form a government supported by the Arab Joint List). Anyone who takes these terms seriously will see that just by meeting them, it would be impossible to form a new government. The biggest hope now is that Israel's most enigmatic politician (Liberman) will come around and agree to a coalition with the support of the Arab Knesset members, so as to avoid a fourth round of elections.

If Netanyahu does manage to win a right-wing ultra-Orthodox bloc of 61 seats, he will have a narrow government with which he can try to push ahead with moves to expand the influence of religion, grow the settlements and annex parts of the West Bank. If, on the other hand, the center-left Arab-Liberman bloc wins at least as many seats as it won in the September 2019 election, there could be a coalition of about 50 Knesset members, with the outside support of approximately 12 members of the Arab Joint List. Such a government could make significant progress in matters pertaining to religion and state, including the introduction of civil marriage, or at the very least “civil partnerships." It could even take important steps in advancing partial advances, if not more, on the diplomatic front. All in all, a narrow government is a sharp tool, while a broad coalition tends to be blunted. As soon as a narrow government focuses on one particular issue or other, it can have far-reaching success. It does not have to be the default option.

Menachem Begin’s government (1977-1981) was a narrow government without Yigael Yadin and his Dash party, when it began the peace process with Egypt. It was responsible for the most important diplomatic move in the entire history of Israel — with the help of the opposition Labor party — and was very successful at it. A few years later, a narrow right-wing government headed by Yitzhak Shamir (1990-1992) brought Israel to the Madrid Conference, which resulted in another important and ambitious diplomatic development: parallel peace talks between the Israeli delegation and delegations from Syria and Lebanon, as well as a joint Jordanian-Palestinian delegation, with the Palestinian part receiving regular instructions from Yasser Arafat’s PLO headquarters in Tunis. Yitzhak Rabin’s narrow left-wing government (1992-1995) was behind the Oslo Accord that led to peace with Jordan. Ehud Barak’s narrow government (1999-2001) was able to get Israel out of Lebanon, while Ariel Sharon’s narrow government (2003-2006) was responsible for Israel’s disengagement from the Gaza Strip.

The claim that important diplomatic decisions require broad public consensus makes a lot of sense, but there is very little chance of it happening. In most cases, the very idea of achieving consensus was only valid in hindsight. In polls conducted before Egyptian President Anwar Sadat’s visit in November 1977, the vast majority of Israelis opposed a withdrawal from the Sinai Peninsula. Similarly, it was only in hindsight that a vast majority of Israelis supported the Israeli peace treaty with Egypt, which not only included an Israeli withdrawal from every last inch of Sinai, but also the creation of a demilitarized zone within Israeli territory along the entire border with Egypt. The same was true about opposition to any talks with the PLO before the signing of the Oslo Accord, compared to the vast majority that supported such talks after the official signing ceremony in the White House.

If a narrow government is formed, it can certainly examine all sorts of original ideas — such as the creation of an Israeli-Palestinian confederation as an umbrella for two sovereign and independent states separated by a clear and recognizable border — even if there is no widespread support for such an idea at its inception. It would be based on the understanding that in hindsight such an agreement is assured very widespread support if it leads to full normalization with the Arab and Muslim world.

On the other hand, when it comes to religion and state, there is widespread support in Israel for ideas like civil marriage. Israel is currently the only democracy in the world without such marriages, and where laws pertaining to marriage and divorce are under the exclusive auspices of the religious establishment. It cannot remain that way, especially if the decision is based on a letter sent by Chairman of the Jewish Agency David Ben-Gurion to the ultra-Orthodox International Union of Agudat Yisrael in 1947, before Israel even gained its independence. Under no circumstances should such a letter compel people in the modern State of Israel to live that certain way in 2020.

A narrow liberal government can also take advantage of the political situation that will likely emerge after the upcoming March 2 election to resolve the question of military service for ultra-Orthodox yeshiva students once and for all. It can do this by amending the Military Service Law and granting the same exemption to men as it grants to women, for reasons of conscience or religion. This would ensure equality in terms of military recruitment, while taking control over such exemptions out of the hands of the yeshiva leaders, who must now confirm that the students actually attend their yeshivas. As a result, the yeshivas will no longer be full of young men who have no real interest in dedicating their lives to study. Even if this change to the law will not result in a large wave of ultra-Orthodox troops serving in the Israel Defense Forces, most of these young men will be able to join the workforce openly and legally, and in doing so, contribute to Israel’s economic growth.