And if Netanyahu scores a landslide victory?

According to his rivals, Prime Minister Benjamin Netanyahu has a plan in the case that he wins the elections: He will empty the law enforcement system of all its powers. 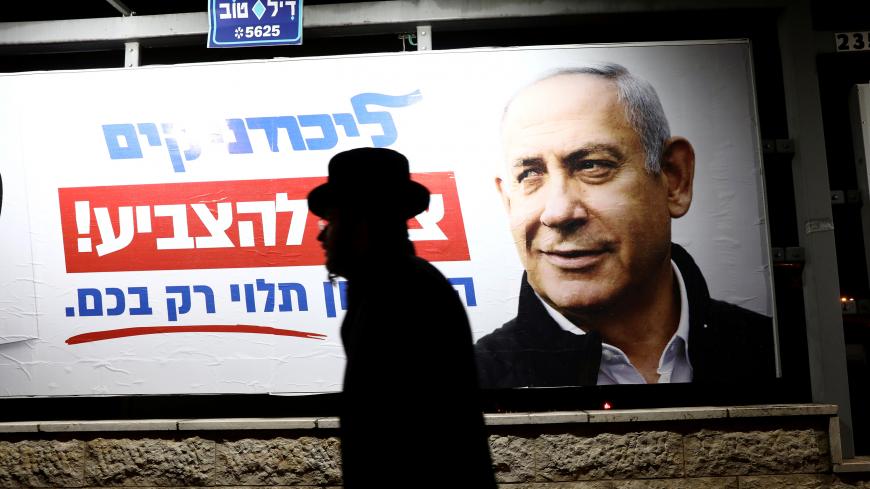 If Prime Minister Benjamin Netanyahu wins the upcoming elections, that will be the end of Israeli democracy, former Prime Minister Ehud Barak said in interviews he gave to the Israeli media this week. Blue and White member Yair Lapid tweeted Feb. 25, “If you plan on voting for Labor-Meretz, ask yourselves one question: What will remain of Israeli democracy if Netanyahu wins by even one mandate?”

Simultaneously, Shas Chairman Aryeh Deri said in an Feb. 25 interview with Walla that his party will enable Netanyahu to continue to serve as prime minister even if the High Court forbids it. This statement is seen as a confirmation of the deep misgivings that are spreading throughout the center-left and the few liberal bastions that still remain in Israel that should Netanyahu achieve 61 seats, he would take off his gloves and shred the country’s law enforcement and legal systems into pieces. Then he would re-create new systems in his own image.

The nightmare scenario example used by Blue and White officials is today’s Turkey under Recep Tayyip Erdogan. They believe that under Netanyahu, the administration would undergo far-reaching changes: The powers of the prime minister would be widened, the wings of the legal system would be clipped and takeover of the media would be completed. As usual, the official formulator of these fears was Barak: “Israeli democracy is being smashed to pieces; next Monday is our last opportunity to halt it. The very idea of an Ohana-Engelman regime [Justice Minister Amir Ohana and State Comptroller Matanyahu Engelman], directed by a Netanyahu whose wife and son have made totally crazy, is truly a nightmare. If we can’t stop him with our votes, we are likely to quickly roll down toward the Poland/Hungary junction or toward the 'Turkey case,'” he wrote in an article published in Haaretz on Feb. 25.

Netanyahu himself reinforced these concerns due to a slip of the tongue during one of the interviews he held this week. When asked if, after the elections, he would consider legislating a law similar to the "French law" [of sovereign immunity] that prevents the indictment of a head of state, Netanyahu did not rule out the possibility. Afterward he realized his mistake and hurried to strongly deny such a possibility in all the interviews he gave. Even Netanyahu understands that if he is perceived as trying to achieve victory in the elections in order to avoid legal punishment, he’ll lose points even among the right. Despite Netanyahu’s current momentum, most of the Israeli public still understands that a prime minister under indictment is not capable of running a country as complicated and volatile as Israel.

Prior to the April 2019 elections, Netanyahu was asked in a Channel 12 interview whether he would ask for immunity from the Knesset after being indicted. The prime minister offered a categorical denial that has already entered the “pantheon of false denials” in Israeli politics, saying this was out of the question. In January, after he was served with an indictment, Netanyahu hurried to file for immunity. Later on, he was forced to retract this in disgrace, when he understood that he didn’t have a majority in the Knesset.

As of now, these glitches have not brought down his standing in the polls. He succeeded in overcoming the initial advantage Blue and White had in opinion surveys, and the right-wing bloc he heads is also recovering. Nevertheless, Netanyahu is still far (four to six seats) from the 61 seats that would, according to his adversaries, put the finishing touches on the destruction of Israeli democracy, as we have known it since the founding of the state in 1948.

Deterioration in the polls caused Blue and White to recently embark on an aggressive campaign of its own. Until recently, Benny Gantz had led a clean, impartial, dignified campaign, but now understands that while he played according to the rules, the voters were fleeing to Netanyahu, who is fighting for every vote and does not follow the rules. The first decision made by Blue and White was to turn to the left and try to storm the 10 seats (according to the polls) of the Labor-Meretz-Gesher alliance. Gantz decided to treat Labor chairman Amir Peretz the way Netanyahu does Yamina leader Naftali Bennett — without allowing his conscience to bother him. The prior Blue and White strategy of letting Peretz concentrate the left-wing votes, and the attempt to pump “soft” right-wing votes from Netanyahu — did not bring results; the opposite was true. Now, in the very last moments of the campaign, Blue and White finally decided to take off the gloves and try to draw votes from every possible direction.

Possible relatively good news for Blue and White is drawn from the statistical history of Israeli politics. With only one exception, every time that Netanyahu reached election day when he led in the polls, he lost or received far less support than was anticipated. But every time he reached election day when he lagged behind in the polls, he won. An upgrading of his position in the last days of the campaign could take the wind out of the sails of Likud supporters, who might be convinced that Netanyahu will win and thus might not flood the voting booths. And the opposite could be true: Center-left Blue and White voters may understand that they are fighting for their home base and may give it everything they have. The elections likely will be decided by the voting percentages within the different groups: the Arab voters of the Joint List, the Likud voters and Blue and White voters. The parties whose voters crowd the voting booths in greater numbers will be the ones to celebrate the morning of March 3.

And what will happen if Netanyahu breaks through the 61-seat barrier? Not everyone is convinced that he can pulverize Israel’s democracy. “There are at least four to five Knesset members in the Likud who will not vote in favor of a “French law” or emasculation of the High Court,” a high-level Likud member told Al-Monitor on condition of anonymity. “I believe that there are many members of other parties who also oppose such machinations.” Even in Blue and White, there are those who believe that it is way too early to eulogize Israel’s democracy. “Israel is not Turkey,” a high-up Blue and White official told Al-Monitor on condition of anonymity. “Here, no one can casually throw journalists or high-ranking army officers into jail, even now. And we really hope that even after the elections, it won’t be any easier to do so.”