As hardline clerics rail against women attending the nationwide protests in Iraq, feminists held rallies in Baghdad, Nasiriyah and other cities in support of women's participation as well as the ongoing protest movement. 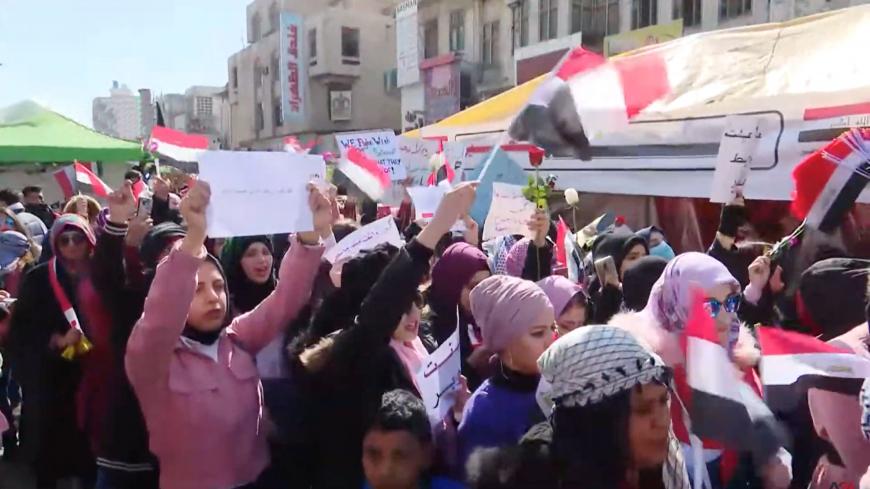 Iraqi women take to the streets dressed in pink and purple in defiance of claims that their participation in protests is immoral in Baghdad, Iraq, seen in a still from a video taken Feb. 13, 2020. - YouTube/A24 News Agency

BAGHDAD — Feminists in pink and purple marched on Feb. 13 in the Iraqi capital Baghdad, Nasiriyah and other cities in the south.

Women have had a central role in the protest movement since it started last October, participating in the protests alongside men and supported the movement by preparing food and providing first aid. Now they and their supporters have marched to challenge the distortions being circulated about their cause as part of the rising feminist movement in Iraq and the region in general.

The feminist march faced accusations from opposers who consider the participation of women in protests to be immoral and unethical. Pro-Iran Shiite cleric Muqtada al-Sadr, for example, has criticized women’s presence at protests and called for separation of the genders.

In an 18-point statement providing instructions for protests, Sadr said, “Protesters must respect the rules of Sharia and the social context of the country as much as possible. The two genders must not mix in protest tents.”

Protesters responded on social media with messages of support for women’s political action. Many people crossdressed to express equality between men and women and calls for a specifically feminist march rose.

Women's rights activist and former diplomat Ahlam al-Kilani told Al-Monitor that women have played an important role in the protest movement since it started, standing against oppression and terrorism and making great sacrifices. Some have even lost their lives in the protests.

Kilani believes that the presence of women at the protests reflects social changes in Iraq and protesters' ambition to include all segments of society, to fulfill their national duty without falling victim to sectarianism and social inequality.

In response to the feminist pushback, Sadr intensified his discourse against women’s participation in marches, describing it as immoral and sinful.

“Today, there is a rise in voices demanding liberation, nudity, mixing genders, drunkenness and debauchery. This is blasphemous and an attack on God and the pillars of Sharia. … It is an attack on prophets and holy messengers.”

Sadr’s Blue Hats were allegedly instructed to spread rumors on social media about illicit and blasphemous practices like drinking alcohol in the Turkish restaurant near Tahrir Square, a business they later occupied.

Sadr warned against what he called the “immoral perverse terrorists of urbanization and liberation.” He called on the people to avoid “getting carried away with their animalistic instincts” and threatened, “We will not sit idle while others insult our religion and country. We will not allow them to erase us just like we won’t allow the occupier to stifle Iraq.”

Secretary of the Iraqi Hope Association Hana Edward stated in an interview with Al-Monitor that the feminist protest has spread to religious cities such as Najaf and Karbala.

Sadr called his followers to participate in his own feminist march on Feb 14 in an attempt to distract the public from the ongoing protests, which he tried to take advantage of and claim as his own. After failing to do so, he has opposed the movement.

In January, Sadr organized a massive march against what he called “the American occupation” to sideline the protests while his Blue Hats attacked the protesters. Around 10 protesters were killed in Najaf, allegedly by the Blue Hats.

The Sadiqoun bloc of militant grouop Asa'ib Ahl al-Haq issued a statement in line with Sadr’s position expressing disapproval of what it called the debauchery and moral looseness observed in feminist marches. It blamed the United States for “encouraging perverse behavior that is not in line with the values of our society. Such perverse behavior includes drinking, using drugs and the intermingling of men and women. This does not respect Sharia, morality or community.”

Kilani said, “The accusations against women in protests are unfair. The purpose is to cripple their role in the process of collective determination and national and social debates.”

"The wide participation of young women in the feminist march on Feb. 13 was a thundering blow to the discrediting of women's participation in the revolution, especially Muqtada al-Sadr's position," said Edward, adding, "The women in the protest, like their brothers, faced beatings, kidnappings, assassinations and threats of all kinds."

Feminist activist Oum Khaled believes that women have attended the protests “to assert women’s role in society and prove their role in the Iraqi social fabric, which has isolated them. Women are rejecting this isolation through peaceful protest and civil action.”