Iran’s ultraconservatives have given birth to their worst nightmare — a group so left-leaning that hardliners consider them would-be communists. 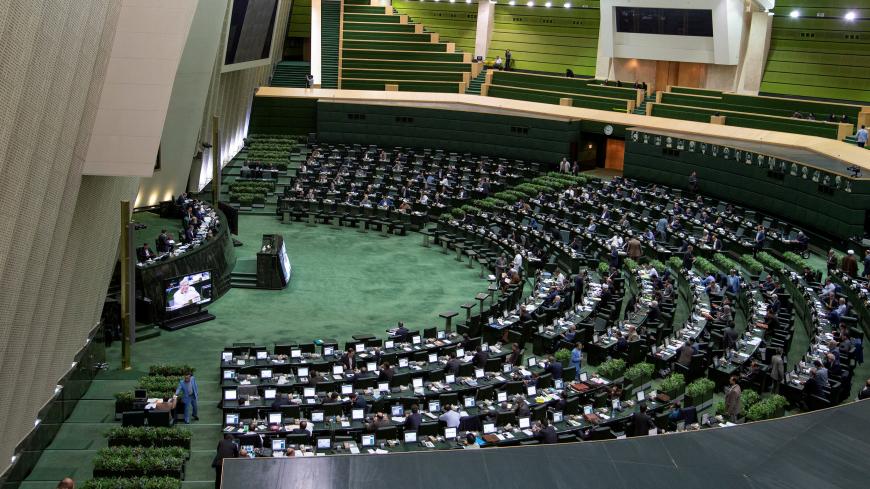 Ahead of parliamentary elections scheduled for Feb. 21, Iranian hard-liners find themselves facing an unprecedented challenge: the emergence of a group with left-leaning tendencies spawned inside its own conservative camp.

The mostly young activists of the Justice Seekers current are practically communists in the eyes of their former friends on the far-right. In the latters' eyes, the Justice Seekers represent a threat in their willingness to cross certain redlines. As a result of some of the group's actions, two of its senior members have been barred from running in the elections, and two other prominent members were arrested Feb. 11, perhaps as a warning, given that they were quickly released. The hard-liner-controlled security apparatus has reportedly forced the Justice Seekers to cancel a number of campaign events they had planned.

Over the past two decades, conservatives had sought to develop a large presence at universities by winning the hearts and minds of students, with the added advantage of also being able to rally a significant number of youths when desired to protest against the Reformists and Reformist-backed governments. To this end, “justice-seeking” groups and associations began organizing in 2004. During the tenure of Mahmoud Ahmadinejad (2005-2013), new currents were instructed to engage students to support the hard-liner president.

In the past few years, some who called themselves Justice Seekers apparently decided to distance themselves from the extremists, noting contradictions and possible hypocrisy in the hard-liner camp. They had always been told that the other, rival currents, including the Reformists, were corrupt, but discovering corruption within their own camp opened their eyes, leading them to part ways with the founding fathers of conservatism.

During the past three years, the Justice Seekers have concentrated on exposing corruption among high-ranking officials. For instance, in 2019 the group urged Chief Justice Ebrahim Raisi to investigate Ayatollah Sadegh Amoli Larijani, a hard-liner and former chief justice, and Ali Akbar Nategh Nouri, a moderate and former parliament speaker, for their roles in a corruption case involving illegal sales of land. The group produced videos and disclosed documents to support their allegations, into which Raisi has promised to look.

Justice Seekers today don’t appear to be influenced by any particular politician, although a number of the current’s senior figures remain close to Ahmadinejad and Saeed Jalili, an ultraconservative and Iran’s former top nuclear negotiator. What angers the hard-liners is that members of the Justice Seekers are focusing on former colleagues. For example, Justice Seekers camera crews have ambushed Hassan Firouzabadi, former head of Iran’s armed forces, and other hard-line officials, and the group has leaked some potentially incriminating documents.

The Justice Seekers began crossing conservative redlines in 2018 when they wrote a letter challenging Supreme Leader Ayatollah Ali Khamenei to appear at the University of Tehran to answer students’ questions about organizations and institutions under his supervision, including the Islamic Revolutionary Guard Corps and state TV, and to discuss the “performance of the Islamic Republic for the past 40 years.”

More recently, with violence on the streets in the wake of a gasoline price hike, the Justice Seekers penned an open letter to Khamenei dated Jan. 2, warning, “The current governance will lead to the collapse of the political system and the majority of people turning their backs on religion and theocracy.” The group also criticized how the political establishment had reacted to protesters, branded as “vandals,” and called on the government to reveal the “disastrous” death toll from the protests. Now, the hard-liners are trying to smear the Justice Seekers, whom they deride as “Justice Violators” and “neo-leftists.”

The Justice Seekers are not monolithic in their perspective, but instead appear to include a range of tendencies. For example, only one prominent candidate from the group, Saeed Zibakalam, signed on to the January letter to Khamenei. Zibakalam was subsequently barred from running in the election and is now the group's campaign spokesperson.

Meanwhile, the Justice Seekers’ foreign policy positions are not entirely clear, but some reports suggest that the tendency is critical of the 2015 nuclear deal and President Hassan Rouhani’s outreach to the West. Another Justice Seekers candidate, Mohammad Sadegh Shahbazi, reportedly agreed with the 2011 “student” takeover of the British Embassy in Tehran after passage of a bill to downgrade ties with the United Kingdom and had been a leader of the demonstration against Rouhani in 2013 when someone threw a shoe at the president for having a phone conversation with US President Barack Obama.

The Justice Seekers have issued statements in support of a number of political prisoners and cooperated closely with Reformists against former Tehran Mayor Mohammad Bagher Ghalibaf, who now tops the hard-liner/conservative ticket for the parliamentary elections and will likely emerge as speaker of the next parliament. The tendency has accused Ghalibaf of involvement in a municipal corruption case in which expensive homes were sold at low prices as favors to certain people.

“Any revolutionary agreeing to work under the umbrella of Ghalibaf has nothing to do with justice,” says Vahid Ashtari, a senior member of Justice Seekers, in a video posted to social media. He notes that some of Ghalibaf’s top managers have been jailed on suspicioin of financial corruption. He asserted, “If the right hand of any other person had gone to prison, state TV would have destroyed him. But they describe him [Ghalibaf] as the jihadi manager and don’t [reveal] anything about [his corrupt entourage].”

The hard-liners have in general reacted harshly to the Justice Seekers forming their own ticket to contest the elections. Abdullah Ganji, chief editor of the newspaper Javan, tweeted Feb. 9 that the Justice Seekers will disappoint their followers even if their candidates win seats in parliament. “The first condition of seeking justice is to abstain from power and wealth,” Ganji admonished.

One should not lose sight of the fact that the Justice Seekers, despite some disagreements within their current, are as hard-line as their old friends, and their goal is to take down and replace the godfathers of conservatism in the hard-liner camp. Regardless of the electoral outcome, this new current has more potential than the established hard-liners and conservatives to attract new followers and thus become a serious headache for the radicals. This is just the beginning. More will be heard from the Justice Seekers in coming years.